Dean Oliver, author of Basketball on Paper and former publisher of the Journal of Basketball Studies (he has since moved into a front office job with the Denver Nuggets), identified what he called the "Four Factors" teams need to win games.

Whatever. It's the trade deadline, and there's just not much to say about the game that was just played. Zach Randolph is a bully in the low block (and I mean that in a very complimentary way) The Wolves again collectively struggled to find the bottom of the net (37% shooting) Rambis' rotations continue to puzzle (Hayward sits 3 games straight, then checks in just 5 minutes into this one?) And Anthony Randolph doesn't get off the bench at all. About the only thing noteworthy is that Kevin Love tied Moses Malone's record of 44 double-doubles.

Same-old-same-old, and honestly we'd probably rather talk about things like Deron Williams getting shipped to Newark (wonder what Jerry Sloan thinks of that). So, since we did just play the Memphis Grizzlies, we'll take a different track with tonight's game wrap and present to you four trade factors.

I've made no secret that I believe OJ Mayo should be a Timberwolf. Combine what we are able to realistically offer in a trade with what we need as a team, and it's so obvious it practically hurts. 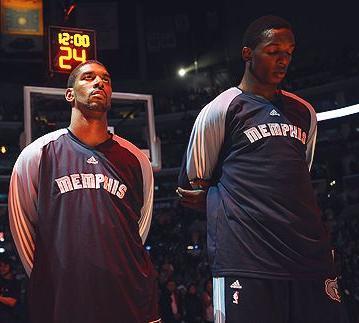 If I have my way, tonight will be the first of many many consecutive games OJ Mayo plays at the Target Center. And if Hasheem Thabeet can join him, even better. This team needs them, and to kick off tonight's wrap, I'll give you my four reasons why.

1 - OJ Mayo is good. It's really that simple. Even with the regressive season he's having, he's still pretty much outperforming any Wolves wing not named Michael Beasley (Webster's close, but gets to be more selective and that negative asst/TO ratio is hard to stand if you want to call the guy a shooting guard). This team needs talent. This team needs production. OJ Mayo is talented and productive.

2 - This team also needs a shooting guard. Not a small forward with sketchy handles playing out of position. An honest-to-goodness shooting guard who can create and make shots and legitimately handle the ball. Ok, so Mayo doesn't do as much with his handles as he probably should. The point is, he has them, and they're better than Wes or Webster's figure to ever be.

3 - Thabeet can help this team without actively hurting it. This is in the same vein as S-n-P's idea to throw money at DeAndre Jordan (which is a really damn good idea, too). We're talking very small sample sizes with Thabeet because he commits too many fouls to stay on the court very long, but the projections on him are of a very good rebounder and shotblocker who can get a handful of buckets without needing anything called for him. He's not overwhelmingly athletic, but when you're 7'3" with a 7'6" wingspan, you don't really need to jump that high anyway. He figures to be productive and defensive minded without needing a high usage rate, which is perfect for this team.

4 - Ricky Rubio. This team can only help their own case by getting better. We're, by record, the second worst team in the league, in a very small and very cold market. Think Ricky might be daydreaming about teaming up with Melo and Stoudemire? I'd say it's a pretty safe bet. The Wolves may hold Rubio's draft rights, but they don't hold his commitment, and one has to figure that the lack of winning...or even the potential to win...is playing a big, big part in that. This team needs to start winning now, not later, because the Spanish Sensation is going to care about results, not promises. The worst thing this team can do is sit tight, lose a ton more games, slog through a draft with little potential, leave a lasting negative impression by getting hit with a lockout, then try to convince Rubio things are getting better. I wouldn't believe that, you wouldn't believe that, and I bet Ricky won't believe it either.

I don't know if Mayo will ever be the superstar he was billed as pre-draft day. But I do believe he's good enough to actively change this team's fortunes for the better, and that's worth pursuing in my book. Yes? No? Have something else in mind entirely? If the Wolves are going to make a move, they've got 24 hours to do so. What say you?