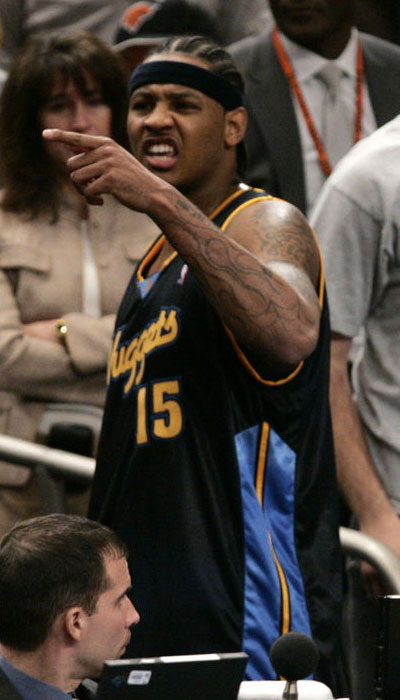 A Timberwolves source told ESPN The Magazine's Ric Bucher on Sunday that the team would not approve of a deal where the team received just New York's Randolph and Curry with Brewer and a first-rounder heading to Denver. While these are the names currently being discussed, additional players could be added to make a deal possible, sources said.

What's all the fuss about, anyway?

Carmelo Anthony will be a New York Knick next season. Make no mistake about that. New York is his home, and the Knicks are the only team on his radar. Both he and his agent, Leon Rose, have publicly and repeatedly stated that Melo will not sign a contract extension with any team except the Knicks. And if he's traded to a different team or isn't traded at all, he's perfectly fine walking out and joining NYK as a free agent.

So that's the base we're working out of. Carmelo Anthony. New York Knicks. 100%

Now this report that our Pups are the new third wheel in trying to make this happen: true. It's far from being the nearly-done deal that was reported last night, but the Wolves are actively...even by their own admission...in this discussion.

That's not to say that there isn't hyperbole happening here. Anytime a potential blockbuster is on the table, there's going to be games played in the media. It's the nature of the beast, so to speak. An early four-team trade involving the Jazz and Bobcats appears to have been reported closer to completion than reality, and was leaked by the Nets intentionally to put pressure on the Nuggets. Similarly, a deal that included the Detroit Pistons fell through when Anthony refused to agree to a contract extension with the Nets, and left in its wake a defeated New Jersey squad and a very frustrated Richard Hamilton.

Already there's speculation that the report of the Wolves' involvement was intentionally leaked as well, that any actual deal is far from taking shape, and several internal issues with the Wolves' front office we're aware of that runs contrary to something like this going through. Drama. Welcome to it.

Others have stated that Kahn is under some heavy budget restrictions, and that's absolutely true. It's also unknown exactly how much authority he has to do something like this. It seems unlikely that a POBO of Kahn's track record would be given clearance to be involved in something this big, and even more unlikely that Taylor would cut yet another buyout check on a big contract (Eddy Curry) that's on the books solely to make ends meet in the trade.

But at the same time, I wouldn't discount it as complete speculation. Donnie Walsh is under equally tremendous pressure from Jim Dolan to get Carmelo before the deadline, and Nuggets rookie GM Masai Ujiri appears to be in over his head at this point. Denver has had more than one chance to get something valuable for Carmelo....Derrick Favors, Andrei Kirilenko, multiple draft picks....and have turned them all down out of what appears to simply be sheer indecision.

If Corey Brewer and Wilson Chandler seems like too low an offer to be legitimate, think again. New York has no reason to approach equal value for Carmelo because they have no competition. Denver will ask for more and hope something else is put on the table, but they're fighting their own shadow at this point. The Nuggets wasted their chances at an even playing field and this is all they have left now. 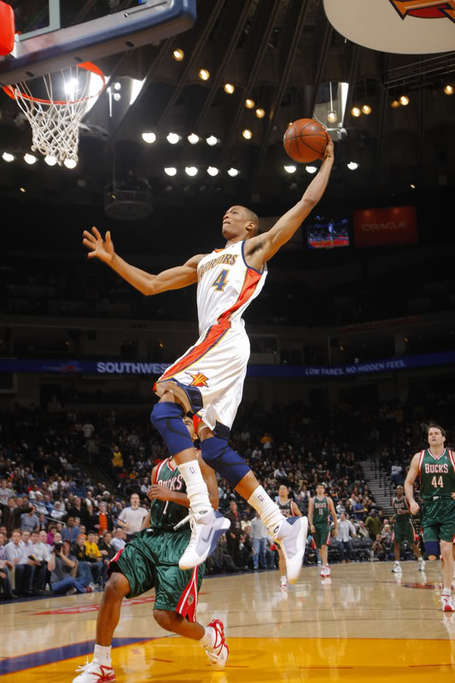 Here's where all this has come from. The Wolves have been actively pursuing Randolph for a long time now in deals that were relatively separate from the Melo drama. Corey Brewer isn't a part of this team's long-term future regardless of anything else, there's a history between Kahn and Walsh from the early 2000 Pacers era...put it all together and it's not hard to see how this all came about. The Knicks want direct help, the Wolves offer to start by throwing in a player they want to unload anyway and ask for a player they've wanted for a long time...and viola. There's your trade rumor. It's really a pretty small and logical step to see how the Wolves enter into the equation here.

It's true that the team sees multiple first-rounders as more of a liability than an asset. With a lockout imminent and no draft order taking shape, word is a lot of underclassmen will be staying in school rather than risk a year of no basketball. If Kyle Singler is being talked about as a top 10 pick, what is a #15 pick really going to be worth? Still, taking on Eddy Curry's contract to unload a couple of low-level unwanted pieces is a dubious exchange at best, especially when a smaller, isolated deal carries much less risk and cuts out all the drama. According to Jerry Zgoda, 'Sota's preference is still to deal just a first round pick straight up for Randolph. They lose little-to-nothing by staying out of the Melo deal entirely, so....as stated at the top....they have some leverage to force the Knicks to make their involvement worth the extra effort.

Danilo Gallinari remains the top player one would think the Wolves would be chasing here. Certainly he'd be my first pick. Kalenna Azubuike, Ronny Turiaf and Bill Walker all have some worth as well. And if Melo goes, pretty much anyone on the Nuggets' roster is up for sale. No chance the Wolves take on Al Harrington like the Nuggets will want, but they could certainly benefit from adding a Chris Andersen, and perhaps could be interested in a rental of JR Smith. And, of course, the Wolves have other assets of their own that could go out to help things along.

The true extent of the Wolves involvement in the big picture is hard to pin down right now. What's been said is what we know...anything beyond that is up for debate. At the least, it's certain the Wolves will do everything they realistically can to get Randolph, even if it's not part of what happens to Carmelo.