2013 and the Island of Misfit Toys

Share All sharing options for: 2013 and the Island of Misfit Toys

You really have to credit Kevin Love. He played that game on one leg. For him to get that double-double in half a game, most of it spent locking horns with an incredibly physical player in Tyler Hansbrough (who's been playing very well of late, by the way) is just amazing. The record was there for the taking and Love got it with an ovation-worthy gut check.

In 2006, Love picked up the nickname "Kevlar" at Rucker Park's annual Elite High School game. Never has the nickname been more fitting. The guy is bulletproof. We've seen everything thrown at him this season...double teams, injuries, entire gameplans designed to stop him....none of it works. He shrugs it off and keeps going.

Perhaps my favorite part of Love's game is his demeanor. Whatever. No big deal. He's not concerned with records or stardom or having a reputation as "The Man". He just wants to play as well as he can on any given night, and that's what he does.

So congratulations to Kevin Love for breaking Moses Malone's record. 52 consecutive double-doubles is a hell of a mark. Wilt Chamberlain is next at...well...227. If I did the math right, Love will reach that mark in a little over two years.

This is sort of a game wrap and planned features 3-in-1...dealie...thinger...whatever. Shut up. 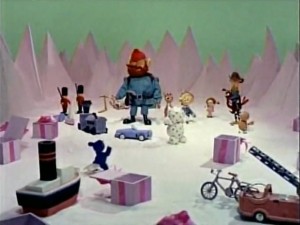 In fact, let's talk about AT a little more. Not to be Debby Downer, but Tolliver is kind of not a good omen for this team. Early this season we noted that Tolliver was more or less outplaying everyone on the team, and that hasn't changed much. Kevin Love has surpassed him and then some, but otherwise...? If we take a sort of quick, unscientific look and try to get a balance everyone's PER, WS/48, simple rating, and on court/off court +/-, Tolliver pretty much tops everyone not named Kevin Love. Leaving Anthony Randolph off the list (he has, after all, been here just a week), Tolliver is 3rd in PER, 2nd in WS/48, 2nd in simple rating, and 1st in net +/-.

...this is a team with eight former lottery picks on it, and Anthony Tolliver essentially outplays seven of them. An undrafted DLeague free agent outplays 7 of the 8 former lottery picks on this team. I absolutely love AT, but that is not good. This team is absolutely a boat that can't float. Or a train with square wheels. Or whatever misguided plaything Santa's elves can come up with. Island of Misfit Toys indeed.

So, there you have it. The Wolves are a team of castoffs who collectively play at a sub-DLeague level. They won tonight by being slightly less terrible than Indiana. But it was fantastic to see them blow out the competition and have fun doing it. Next up for them is Utah on Friday.

And Kevin Love broke Moses Malone's record for consecutive double-doubles (and the Wolves' record for offensive rebounds in a season as well). Next up for him is Wilt Chamberlain, so....yeah....check back with us in 2013.