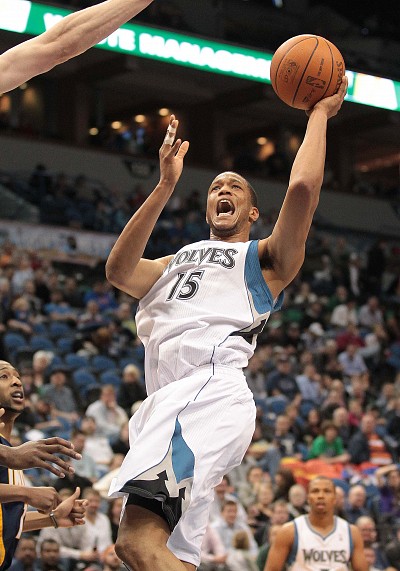 When the Timberwolves acquired Anthony Randolph at the trade deadline, David Kahn said he didn't think Randolph was going to help the team very much this year. And that struck me as very...odd. AR was a good player at Golden State....arguably the 09-10 Warriors' second best player behind just Corey Maggette...despite being the youngest guy on the roster and the most frequent target of Don Nelson's mind games. He was nearly a 20-10 player per36 that season. He's 6'11" with a 7'3" wingspan and 35" vertical. He can handle the ball as well as most guards. How could a player like that not help this team?

Well....it turns out the reason is Kurt Rambis kind of won't play him.

Randolph has played nearly all of his minutes in a Wolves uni at center, and that means he's competing with the East Europe Bloc...Darko Milicic and Nikola Pekovic...for burn. Which I don't really think and didn't think was much of a competition at all.

Here's the quick comparison totals in the games the Wolves have played since Randolph arrived:

Now, there's a couple things to point out here. First, the only reason Randolph has played the most total minutes of the three is because Darko missed 3 games in that stretch. If we go by minutes/game, Darko has averaged nearly 21 minutes per contest in this stretch, with Randolph at 14/game and Pekovic at 12/game. And second, Randolph has had three games were he's played 7 minutes or less. 7 minutes against the Jazz, just 4 against the Hornets, and just 4 the first contest against the Warriors. That adds up to a fairly significant amount in this sample size, but getting bits and pieces like that isn't enough to establish any rhythm or get a feel for the game, which artificially hurts his scoring and rebounding.

Pekovic has played a lot of games of limited minutes, but that nearly always has to do with picking up fouls. Over the last 10 games he's racked up 29 fouls....that's 3 per one quarter of floor time. Really not good. But his limited minutes are his own doing. #Pekoviccan'tbefreed

The other thing of note is Randolph quite handily beats out them both in a key category for the Wolves this year...assists/turnover ratio. One of the most interesting things about this comparison is to look at what Darko and Pekovic combine for compared to what Randolph does by himself. Over the last 10 games, Randolph has totaled more assists than Darko and Pek combined, and has committed just 9 turnovers to their 32.

So per36, you're getting basically the best parts of the EuroDuo combined, without either of their mistakes. Again, Randolph by himself is giving the team as much, if not more, than Darko and Pek combined.

But perhaps the most revealing comparison is if we add together the totals of the Darkone and the Godfather and then stretch Randolph's numbers out to that amount of minutes. So it's...per264 (I know i know...), and this is what we get:

Oh. Wow. Would you look at that. Per264, Randolph would have done more everything good and less everything bad by himself than the Bash'em Bros did as a tag team.

Meaning: if Randolph had played those 264 minutes instead of Darko and Pekovic...and they had been limited between them to AR's 145....the team would have very likely scored more, rebounded more, facilitated more, all while making fewer mistakes. And probably would have had a couple more wins.

Look, 264 minutes isn't a lot of burn over 10 games. That's just 26 minutes a contest...barely more than half a game a night. Anthony Randolph produced more with fewer mistakes than both of the actual centers he competed with for playing time. It shouldn't be hard to find him 26 minutes to play a night, especially when he's better than the guys he'd be replacing. He should be playing at least that much every night for the rest of the year. And I'd bet if you extend him out to 36 minutes a game for the rest of the year, he'll get damn close to outproducing his counterparts at a 2-to-1 ratio.

Yes, Randolph is underweight for the center spot. His basketball IQ is still a long ways away, and he's painfully young. But he's doing more while being given less, and that would make a major difference for the Wolves...if he was consistently on the floor.

Jim Peterson asked the million dollar question at the end of the Detroit game: if Randolph is going to be this good, how do you keep him off the floor? Apparently the answer is 'put him on Kurt Rambis' team'.