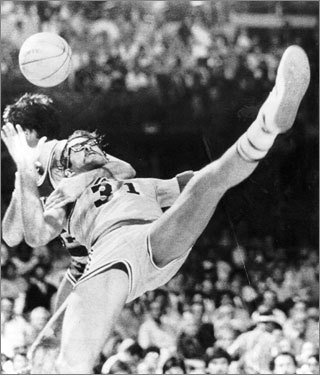 Kevin McHale making a good play on the ball.

Just out of curiousity, I thought I'd put up a poll (or at least try to do so, since I've never done this before), to see just how many of us believe Rambis should get fired now versus those who see some redeeming value in him as the coach of this team.

ED NOTE: I'm bumping this to the top as well as adding the following comment from BVP and a photo to the post:

It was sickening to watch the game and see Rambis glad-handing the Lakers players. During the extended delay when the refs were looking at the monitor for Bynum’s flagrant 2, Kurt called Luke over to the sideline to talk to him. Who else came in while Kurt and Luke were talking? None other than Derek Fisher, poking his head into the conversation. Now this is the player on an opponent trying to insert himself into a huddle between the coach and his point guard, presumably about game strategy (although that’s probably being charitable to Rambis). Any decent coach would tell the opponent to get the f*ck outta there. What did Rambis do, you might ask? He shared a laugh with good ol’ D Fish about the situation.

Fire Rambis right now. The fact that he defends Bynum for assaulting Beasley is just the icing on the cake. If I were a player on this team, I wouldn’t do a damn thing that Rambis told me to do, because he clearly doesn’t give a shit about the players or winning.

EDIT: Tom Ziller has more on the foul here.

Should Kurt Rambis be immediately fired as the head coach of the Timberwolves?