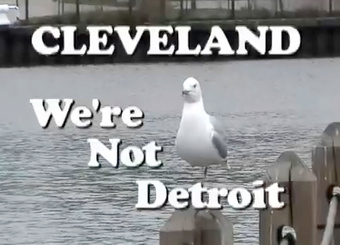 Tonight, we play the city that even Cleveland makes fun of.

As negatively as some Minnesota fans think about our dear Timberwolves, it could certainly be worse. The Detroit Pistons are imploding. Fights between players and the coaching staff. Veterans who aren't playing, haven't been traded and are wasting away with expensive contracts. A bumbling GM and not many wins to show for any of it.

Let's be honest. If you had the option of switching rosters with any team in the league, wouldn't the Pistons be one of the teams to whom you'd say, "no thanks, I'm good."

The Wolves are coming off of a tough moral victory over the Los Angeles Lakers. Wesley Johnson may have had the best game of his NBA career, not only for his offensive game (20 points and 8 rebounds), but for the defensive job he did on Kobe Bryant. Hopefully, Wes and the rest of the team can keep up the momentum tonight in Michigan. 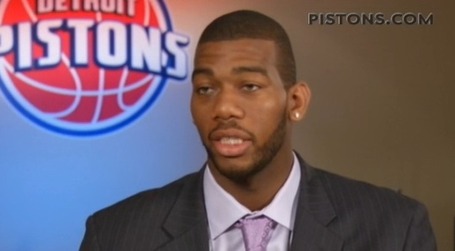 Greg Monroe is a big man who has been touted for his versatility and high skill level. Monroe can handle the ball and pass, especially when he is operating out of the high post. He can also hit a midrange jump shot. All of that is nice, and maybe the Pistons made a nice value pick at #7, but does Monroe have the size and strength to go up against Nikola Pekovic tonight?

With Darko Milicic out due to personal reasons, Monroe will take on Pekovic and Anthony Randolph. I hope the Piston trainers have the ice packs ready, because Monroe, Charlie Villaneuva and other Detroit bigs will certainly need them. 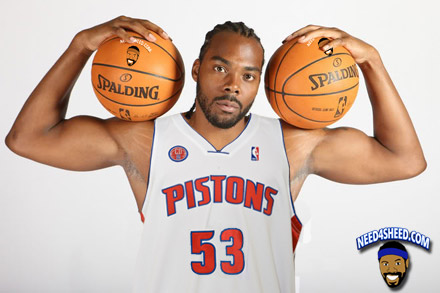 Chris has a hard enough time getting one ball into the basket. He might want to hold off on the two-ball thing.

Will Chris Wilcox get another start for the Pistons or will Jason Maxiell find himself back in the starting lineup? Its hard to tell what will happen with Detroit this year. In either case, Kevin Love is going to face two post defenders who enjoy contact and will likely not let Love have many easy looks from inside. Let's face it, though, that's the only area where the Pistons might have even the smallest advantage in this matchup.

What the Wolves need to do is to run the pick-and-pop with Love and get him open from some outside shots. Wilcox and Maxiell, while decent post defenders, aren't nearly as effective at the perimeter.

Of course, in order for that play to work, the T'Wolves' point guards will need to actually pass the ball to laugh. Barring that minor hiccup, however, the double-double streak should easily continue tonight. 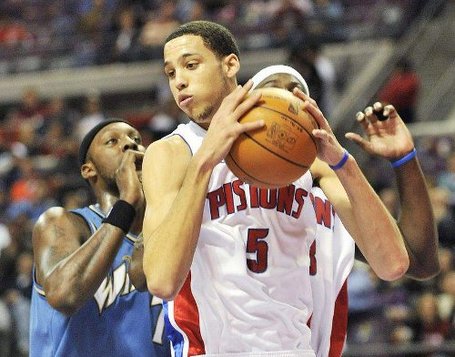 The Pistons are undoubtedly hoping that Austin Daye can turn into another Tayshaun Prince. Both are lengthy defenders who can hit the three on occasion. Both look like they haven't had a good meal in several years. This year, Daye is shooting better from downtown (.423) than he is from inside the three point arc (.406). His defense is okay, but most relies on shot blocking, and the rest of his defense needs a lot of work.

Although Beasley did not shoot very well on Tuesday against the Lakers, he won't be facing Ron Artest in this one, and he should have a much easier time scoring buckets against Daye and the Pistons. 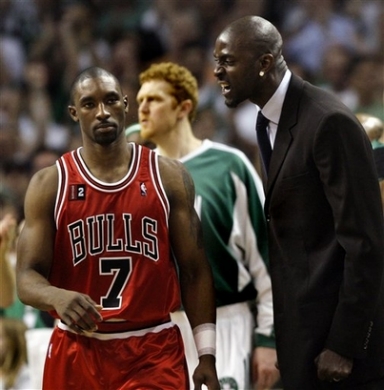 Just think how good Ben Gordon would look on the Bulls right now. Without the sneering Kevin Garnett, of course.

Ben Gordon could've been the missing piece for the Bulls. Instead of using Keith Bogans, Ronnie Brewer and some other nobodies to man their shooting guard position, they could have Gordon, who (along with John Salmons) helped provide one of the most memorable first round series in recent memory. Instead, Gordon is languishing out in Detroit.

I know its sounds like a broken record, but I think we're finally starting to see what Wesley Johnson has the potential to become in the NBA. Unlike Jonny Flynn, whose defense was oversold, Wesley Johnson has the tools and the desire to become a solid defender. He locked down Kobe for most of the night. He also has shown that he can hit shots in catch-and-shoot situations and coming off of screens. If he can learn to put the ball on the floor and create some contact, there's no reason (unless you believe in the "23-is-too-old!" theory) that Johnson cannot become an All-Star caliber forward. 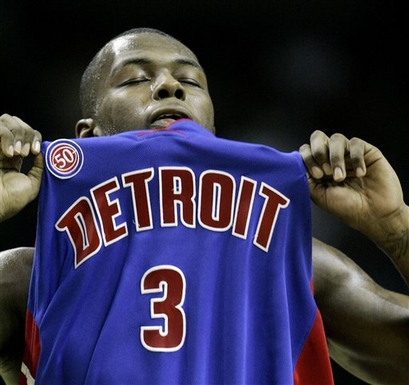 So, this is your point guard of the future, Joe Dumars. Really? This guy?

Choosing Rodney Stuckey over Chauncey Billups is probably not the worst basketball decision of the past ten years. Chris Wallace traded Pau Gasol to save money and then spent it all on Zach Randolph and Rudy Gay anyway. Mark Cuban decided not to resign Steve Nash. The Hawksdecided to draft Marvin Williams over Chris Paul and Deron Williams.

But Stuckey over Billups has not been a great one. Has Stuckey been as underwhelming for Detroit fans as Jonny Flynn has been for some Minnesota fans (not me, of course; I still love J-Fly)? Will he get an extension from Detroit or will they just let him walk onto the free agent market? How far back will the Billups decision set the Pistons' franchise back?

Luke Ridnour is going to embarrass him tonight, provided that Luke watched those "How to Run a Successful Fast Break" video tapes that I sent him. 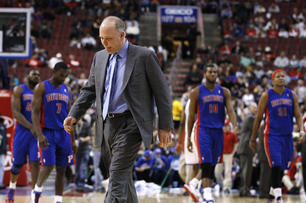 See, there are coaches the Wolves could've hired who would've done much worse than Kurt Rambis.