Share All sharing options for: Maybe I'll Have To Miss More Games 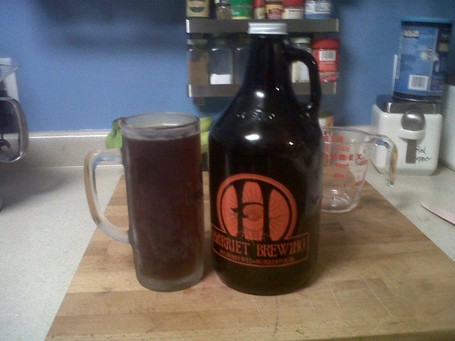 OK folks, we're going to try something new here at Hoopus. I'm going to miss games. The last game I missed was against Golden State. Win. I then stupidly watched the Lakers give a half-assed effort only to coast home with the victory in a comical effort against the good guys. Loss. Tonight against the dysfunctional Pistons, I was stuck in traffic and I was unable to make it home until the middle of the 4th quarter. Win.

We're on to something.

If any of you want to explain how vast improbabilities can continue to lead to Wolves victories (seriously, Jonny Flynn had a 7:1 ast/to ratio), be my guest. As for me, I just want this team to win as many games as possible and I seem to have found a karmic trend in actually avoiding watching the games against teams that are as bad as Our Beloved Puppies. Maybe I'll just watch them play against the good squads. Anywho, if anyone wants to write a game wrap (or 2) I'll bump it to the top.

Meanwhile, let me point you in the direction of a brand new microbrew in my beloved south Minneapolis: Harriet Brewing (h/t to the excellent Heavy Table; don't forget to check out the foodie tour of 38th street). I was able to pick up a growler of their 1st batch Dark Abbey Belgian Style Dubbel and it is simply delicious. Not really close to the best beer I've ever had but if you want to be in on the ground floor of a brewery with promise, this is the place for you. Actually, they were having trouble with their draught lines and they didn't have all of their advertised brews available, but it wasn't a worry because they were all very accommodating and the folks in line liked to chat as much as I do. FWIW: I've heard very good things about their IPA....at least that's what the guy with the lighted bike helmet told me while waiting in line. 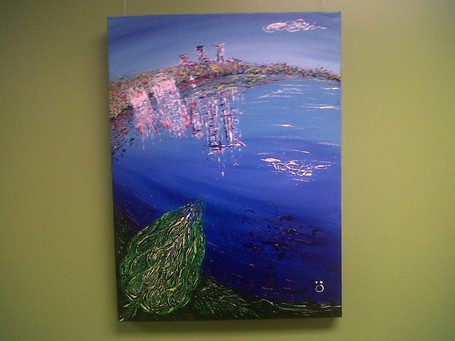 How much more ground-level does it get to see the artwork featured on their label being hung on the wall? (If this brewery blows up, this pic was hung about 30 seconds before I took this shot. Please, future HB groupies, buy me growlers because of this.)

Since I do not live in the cities, and since I hate shopping, my trips to town must be accompanied with extremely targeted food and beverage finds. Today's beer find was accompanied by my favorite sandwich in town: the mock duck Banh Mi at Jasmine Deli on Nicollet. If you have never had this sandwich, you need to immediately pack your tent, hop in a cab, and get your butt on down to Eat Street. Their pork sandwich is ok, their chicken is above average, and their beef is better than what I was expecting, but their mock duck is to die for. Unlike other Banh Mi joints around town, the Jasmine Deli has mastered the art of the pickled onion. Instead of just getting the crunch of the bread and the tang of the pickled daikon and carrots to balance out your favorite protein of choice, the Jasmine Deli incorporates a sweet pickled onion that shouldn't work, but does, and not just because you aren't expecting it in a Banh Mi sandwich. Plus, they're $3.50 and they go great with beer. You'd be an idiot not to try one, and you'd be even more of an idiot not to sneak one into the Target Center so you don't have to eat awful hot dogs and nachos.

Maybe we'll have to put up a pre-game "where to eat" post for fans on their way to Target Center. The food at the arena is terrible (never mind the class warfare angle; Is there any good food on the 2nd level?) and there is no way you should have to watch bad basketball after (before?) eating bad food. You need the good stuff. Anywho, another idea, another day. 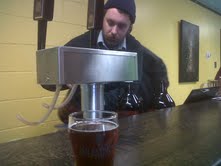 My growler, being poured.

Well folks, that about does it. Until they lose against a crappy team, I will continue to avoid the games while eating good food and drinking good beer (and listening to good music...extra bonus, as today was Silver Jews day at the SNP household). Maybe this is the karmic energy that makes Jonny Flynn tick. Maybe, my happiness and his happiness are aligned and my constant negativity about his complete inability to play professional basketball has destroyed the delicate balance of the universe.

Who knows. I just like watching a team that wins 2 out of 3, even if I don't actually watch the 2 out of 3.