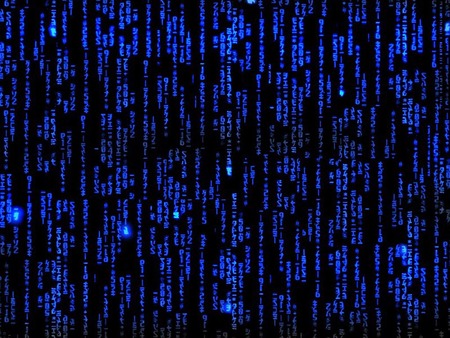 Never fear, Minnesota. I'm here to take back this site from Negative Nancies like Stop-and-Pop and Oceanary.

As someone who has always been a fan of sweeping statements and generalizations, let me ask the following:

Aren't you all sick of the negativity around here?

Don't you wish that, for once, someone would thank Darko for being here, and not worry so much about whether he's "successful", whether his contract was "good" or whether his shots go "in"?

Don't you wish that Kurt Rambis and David Kahn would get credit for making the team so entertaining that we could get 800+ comments following a loss to the Lakers on a Friday night?

After all, I, like you, spend good money to come here every day and read unbiased takes about all of the great things going on with the Minnesota Timberwolves. If I wanted to read negative game wraps and articles filled with hate and bias, I'd go somewhere like the Trib website or T'Wolves Blog or ESPN.

So, I'm taking this site back. Sorry, SnP, its been a good run. But like someone recently suggested, it might be time for you to ride off into the sunset and leave this blog to the Positive Police (I guess I'm the Chief of Police).

From now on, any inaccurate (read: negative) statements about the Wolves will be flagged and the person who posted it will receive a citation. Five citations and you're looking at a violation. Four of those and you'll receive a verbal warning. Keep it up, and you're looking at a written warning. Two of those, that'll land you in a world of hurt, in the form of a disciplinary review, written by me and placed on the desk of Glen Taylor.

With that in mind, let's take a look at this afternoon's game against the Sacramento Kings: 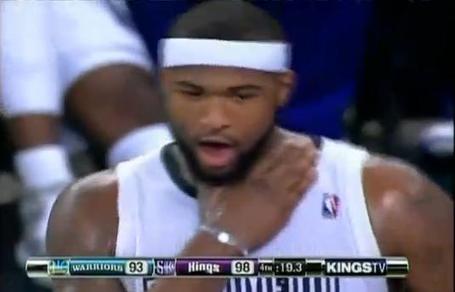 Can we look at this as anything other than an admission that DeMarcus Cousins loves to choke puppies and young children?

Talk to one of the Negative Nancies (abbreviated "NN" from now on) and they'll likely tell you that they would have taken DeMarcus Cousins with the 4th overall pick in this past summer's draft.

Picture that. Taking a convicted felon with the 4th overall pick. Convicted of what, you ask? It doesn't matter. After all, we don't require a conviction to take shots at O.J. Simpson or R. Kelly or Kobe Bryant or Ben Roethlisberger. Why should DeMarcus Cousins be any different? Clearly, he committed an assault on Donte Greene, and judging by the picture above, he was encouraging fans at ARCO Arena to start choking anyone with a Golden State jersey on.

Darko Milicic wouldn't hurt a fly. Unless that fly happened to be sitting on a Serbian referee or a Memphis Grizzlies' jersey. 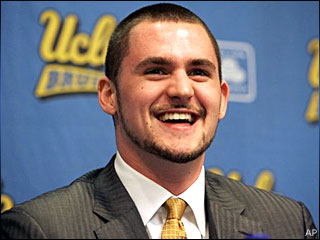 Everyone loves Kevin Love. Some people just like him a little bit more than they should.

One thing about those NN; they love their contradictions. Sure, they hate on everyone else on the Wolves. Even someone with seemingly no flaws like Jonny Flynn. And then they'll pick one player and continually praise him. Why? I'm not sure. After all, everyone on the Wolves has the same amount of wins this seasons. So, logically, they should all be praised the same.

Sure, Kevin Love had a "double-double streak". But think of all of the people who have helped Love get to where he is now?

Darko Milicic helped him by not going after any rebounds himself.

David Kahn helped him by not going after any other competent rebounders.

Kurt Rambis helped him by never running plays for him and forcing Love to stay close to the basket.

The rest of the team helped him by missing so many easy shots.

Michael Beasley closes so well, not even Alec Baldwin could say anything to him.

Basketball is for closers.

But people want to get on Michael Beasley because he's missed a few shots in late game situations. They conveniently forget the Clippers' game and the layup against the Cavaliers. The NN only want to talk about "turnovers" and "inefficient shots". They like to make stuff up and say that shooting long twos isn't as good as shooting layups or three point shots.

They won't even give Kahn credit for getting this guy. Think of it this way. In two drafts, David Kahn has made five 2nd round draft picks and not a single one has recorded a stat for the Minnesota Timberwolves. We traded two 2nd round picks for Beasley and he has recorded a lot of stats.

How can you not feel great about this team? 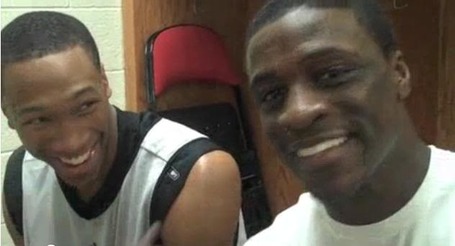 I'm such a fan of Flynn and Johnson, I've recently applied to Syracuse University. I was shocked when I found out that I can't actually major in 'Awesome'.

UCLA. Oregon. Kansas State. Creighton. All good schools. But none can compare to Syracuse.

At Syracuse University, students can enroll in classes like:

- Dental Hygiene for a Perfect Smile

- Ageism in the Workplace

- The Zone Defense of Life

From now on, any mentions of 'Syracuse', 'smiling', Wesley Johnson's age (this means you, PD) and the "six-overtime game" should be done without sarcasm. Sarcasm is the code language of the NN.

Running a fast break is not easy. Give Luke some credit.

Have you ever run a fast break? It's not as easy as it seems. First, you have to get the ball up the court. You have to know who is on the wing. You have to locate the defender. You have to make the play. And then, you have to run back after the turnover and stop the other team from scoring.

It's exhausting. You really think you should make fun of a guy like Luke Ridnour for not always running the break correctly? Maybe we should put you in that situation and see how well you do.

After all of the assets that David Kahn has spent on point guards, Luke Ridnour has proven to be the best of the best. For that, Ridnour - and Kahn - should get our respect. The NN will only focus on the times Ridnour "travels" or "takes an ill-advised shot early in the shot clock".

Believe me. If you were running the break, this team would be a lot worse. 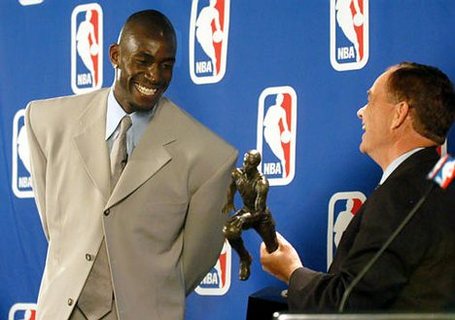 After the Wolves demolish the Kings today, I expect a positive game wrap with nothing about Kurt Rambis' rotations, David Kahn's shorts or Glen Taylor's wedding invitations.

This is Canis Hoopus. We stay positive, even when the evidence tells us not to.