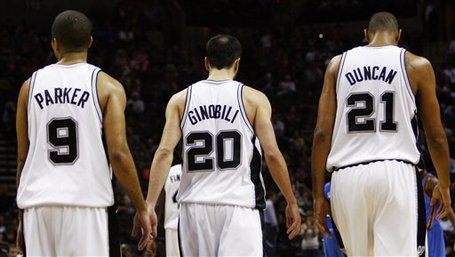 Is it the end of an era? It certainly feels like it. Oh, sure, the Spurs have lost in the first round before (2009 vs the Mavericks, 2000 versus the Suns) but in both those cases, there was reason to say San Antonio fell victim to uncontrollable circumstances. Manu Ginobili missed that series with Dallas. In '00 Tim Duncan sat out against Phoenix. Just back timing with the bad luck. San Antonio would be back next year.

This time, it doesn't feel like that at all. San Antonio couldn't dodge father time forever. This time, the Spurs feel genuinely old. They were basically healthy, with the top seed in the league, and lost to a team that made the playoffs for the first time in 5 years, playing without one of their top two players. This time, Tim Duncan genuinely got overwhelmed by his matchups, and Ginobili didn't have any magic bail them out.

So with Memphis' closeout of the Spurs tonight, they move on to the second round, while San Antonio is left wondering "what now?", as they face the prospect of having to genuinely rebuild for the first time in over a decade. 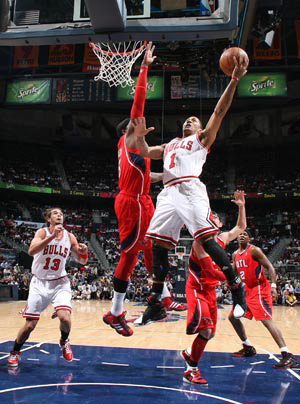 Well....I had a feeling heading into the first round, that the Magic were in a lot of trouble, and it turned out they were. Jason Collins didn't turn out to be a Dwight-killer, but he did enough to impact the series, especially after Zaza Pachulia was suspended for game 4. Dwight did his part, putting up 27-15 averages (although the 5.5 TO/per was not helpful...), but his supporting cast absolutely bottomed out.

In game 6, the Hawks shot 39% and committed 16 turnovers....and won. That's how bad Orlando played. I've got half a mind to just say we eliminate both teams and have Chicago play a best 5-of-8 with Indy.

The Bulls, for their part, didn't blow out the Pacers as predicted, but they did take the round pretty convincingly.

As for this upcoming matchup, I'm calling Bulls, but it's not going to be a pretty series. Although the Hawks beat the Magic, they didn't play very well themselves and are still a team with a poorly coached, helter-skelter roster. And Indiana's frantic offense and unorthodox defense exposed some of Chicago's biggest weaknesses: they have trouble defending teams they can't predict (and the Hawks are nothing if not unpredictable) and their offense basically boils down to a one-man-Rose-show. Bulls. But hide the children, this is probably going to be ugly... 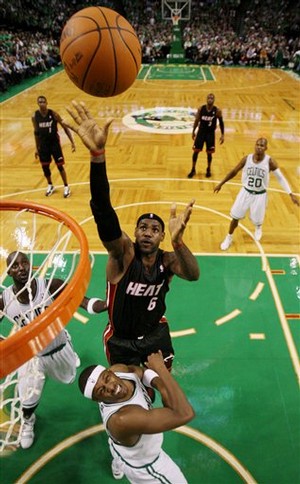 Now, this ought to be fun.

No major headlines from either of these teams in the first round, other than the Celtics seemed to rediscover the mojo they lost when Kendrick Perkins was dealt away. Rajon Rondo, in particular. But otherwise, eh....the C's sliced up the Knicks terrible defense, and the Heat straight up overwhelmed the underpowered Sixers.

But going head to head now, the Heat and Celtics figure to put on one hell of a show. The Celtics took the season series 3-1, but got blown out by Miami in the final tilt less than a month ago. The Heat struggled in the regular season to gameplan against Boston's defense, but have youth and power on their side, and a year's worth of acquired chemistry.

Added to that are the possible returns of Udonis Haslem and Shaq, the likely absence of Mike Miller, the ongoing struggle for Boston to get Jeff Green and Nenad Krstic to fit in, and the revelation that Mike Bibby + Big Z = teh sux.

I'm going to very tentatively say Boston here. But that's like a 51/49 % prediction. I like the Celtics' balance and experience edge. Miami still has a lot of trouble spreading the floor out, and Boston will know how to exploit that. But Boston winning will depend a lot on Rondo playing at the same level he played against the Knicks at, and who knows if that will happen.....Boston.......? 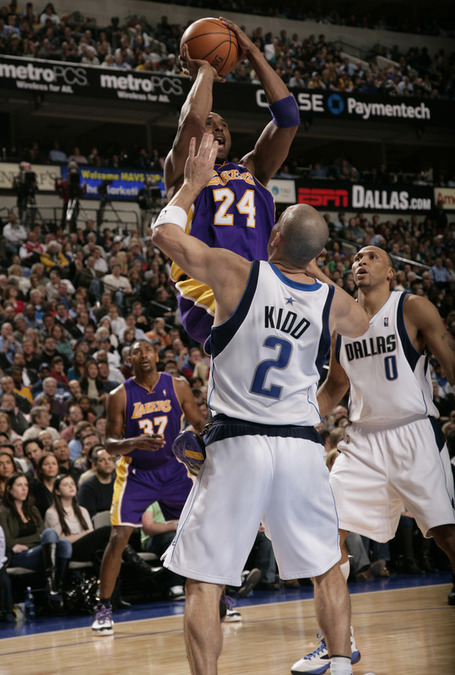 LA struggled a lot more that I would have ever predicted to put away the Hornets. I think that was partially because Chris Paul had a freakishly monster run, proving he is still the point guard to beat. But I also think Kobe is right at the edge of the cliff Timmy D just dropped off of, where he and the world are realizing he's not the unstoppable franchise guy he used to be.

The MVP of that LAL/NOH series was Andrew Bynum. He tipped the round with his work in the paint, overwhelming Emeka Okafor on offense and locking things down on defense. Can he repeat that success? It's a lot less likely with Tyson Chandler as his new playmate.

For the Lakers, a lot rides on their bigs. Pau Gasol and Dirk Nowitzki is always an interesting matchup of contrasts. But the Lakers also have Lamar Odom and Ron Artest to send his way, so one figures they have the advantage in the painted area. Their big men are all-around more talented, and can score in the post much more effectively.

For the Mavs, the bench is the key. Jason Terry in particular. Chris Paul reminded the world that the Lakers are very vulnerable to pick-and-roll action from small, speedy guards, and always have been (Mike Bibby...Tony Parker...Steve Nash............Troy Hudson......) If JET can replicate a good portion of what Chris Paul was able to do, he'll give the Lakers fits. As could JJ Barea, or Roddy Beaubois. And it sure helps when the pick man is a power forward who can light it up from anywhere inside 30 feet.

Kobe hasn't gone off the cliff yet...he's still good enough to more than hold his own against any Maverick wing. But who holds the line for Dallas when the ball gets right under the hoop? Especially for those times that Dirk has to take a breather. I think the Lakers eek out a win based on the superiority of their post play. But it won't be easy. Lakers 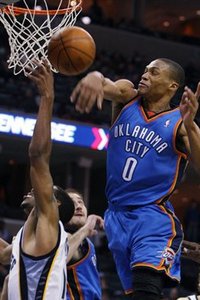 The Thunder/Nuggets series turned out pretty much as I predicted (aka the opposite of how ESPN's 'geniuses' predicted). Denver had a ton of talent to keep them close each game, but their lack of a go-to star meant they couldn't climb the last rung and close things out at the end. Kevin Durant torched...and I mean torched....the Nuggets, scoring 41 points not once, but twice in the series and singlehandedly burying them in the fourth quarter of game 5.

The Thunder, however, could find things much more difficult against the Grizzlies. Memphis isn't as overall talented as Denver, but they they are much more physical and.....mmmm.....'direct'. They don't do slip-screens, inverted post-ups, or 12-touch possessions. They come straight at you. Kendrick Perkins is going to have his hands full with Zach Randolph, Shane Battier and Tony Allen can both give Durant fits, and Memphis' ability to come up with steals is a major concern for Westbrook, who can be very turnover-prone under pressure.

Conversely, though, the Grizzlies are also in for a much more difficult time. Unlike Antonio McDyess and Matt Bonner, Kendrick Perkins matches Randolph pound-for-pound (and scowl-for-scowl), Serge Ibaka is a one man block party, and without Rudy Gay as his opposite, Durant can very nearly generate more offense by himself than the entire Memphis wing/guard corps combined.

This is going to be a very physical series. I wouldn't be surprised to see a bucket-full of technicals get called, with a few flagrants or even ejections. But ultimately, I favor the Thunder. They're built pretty ideally to handle Z-Bo, and without Gay, where else can the Grizzlies turn to? OKC has enough big, defensive bodies to throw out there that Randolph won't be able to beat them by himself, and if push really comes to shove, Durant and Wetbrook can draw fouls on command and beat Memphis at the free throw line. Thunder