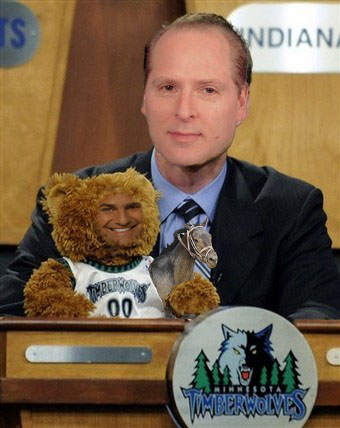 Here it is folks, the last top pick before Clippergeddon.  Did you ever in a hundred years think that a franchise that has never moved up in the lottery, and that has never landed the top pick, and that has won a combined 32 games over the past two seasons would be in a position where there is legitimate speculation that should they buck two historical trends they might trade away their long-sought-after booty? Well, on the bright side of things, should they finally break through with the lotto and trade the pick, they just might be on the cusp of something even more historic: 3 consecutive sub-20 win seasons!  Onward and upward, I always say.

Anywho, despite all of that, let's think positive thoughts today.  After all, today from 12:01 AM to 7:29 PM is pretty much the best time to be a Wolves fan.  It's our glory (half) day.  Some suggestions: