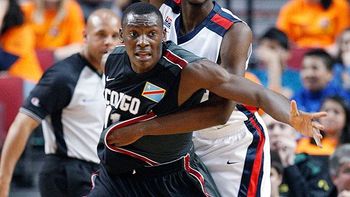 This year's draft class has shaped up to be rather underwhelming, to say the least, and that has left the spotlight open for anyone able to grab people's attention. And no one....not even consensus #1 pick Kyrie Irving....has generated as much noise as Bismack Biyombo.

There's been talk that the Timberwolves could (or, in some cases, will...) take Biyombo as high as the first overall pick. What does Team Canis Hoopus think of that? Well...there's some reasons why it wouldn't be such a bad thing. And some reasons why it really, really would be. And a reason why the Wolves could get someone else and still draft him anyway.

Let me preface this whole thing by saying that Biyombo is a very intriguing prospect. I don't dislike him, by any means. I'd, in fact, be rather happy to see him in a Wolves uni. If one were to list reasons why Biyombo would be a good player and a good fit for this team (and by "one", I mean "me". And by "were to", I mean "am going to") it'd probably looks something like this:

He's physically ideal. Meaning he's athletic, has reach, and is very mobile. I'm still somewhat skeptical about the idea of a 6'9" center, but if his wingspan is really in the 7'6"-7'7" range, he'd probably be able to hold his own in the pivot. Jerry Zgoda often says there's no substitute for height and length....length in particular....and Biyombo certainly has pterodactyl arms.

He'd be a low usage center. DeAndre Jordan. Greg Oden. Hasheem Thabeet. That type of player. S-n-P previously laid out the pros of having a center who could produce a lot with very little, and Biyombo certainly appears to be in that mold.

Potential game-changer defensively. The jury's out on whether he'll ever reach that level as a pro (more on that later...) but the potential is definitely there. Biyombo has a great combination of lateral quickness to jump pick-and-rolls and cut off lanes in the paint, vertical quickness to alter shots and grab rebounds, and timing to get the most out of his physical tools. He also appears to be very vocal, meaning not only does he try to be in the right place most of the time, but he's also trying to get his teammates to be as well. Communication is the secret art to defense. As Dr. Jack Ramsey puts it, defense is an exercise in collective decision making. The more you know what your other 4 teammates are doing, the better off everyone is.

Potential skill level and fit. Right now Biyombo is pretty raw. Particularly on offense. A lot of what he does on that end of the floor is capitalizing on drop passes and crashing the offensive glass. But he showed enough at the Nike Hoops Summit...particularly a few clever post moves...to think that he could grow quite a bit with time and experience. And as for the present, well, a guy with the wingspan of a 747 and the explosiveness of a SAR missile would make a pretty good ally-oop target for a creative point guard.

High character. This team needs a defensive presence. And this team also needs a psychological and emotional anchor. Biyombo appears to be both. One adjective you hear over and over again from scouts who were at the NHS is "passionate". He plays with emotion that rubs off on his teammates. He competes on every possession. And he wants to be the team leader on the floor. "Character" has become something of a catch-22 here in Hoopus-land (and not without good reason) but it would be nice, at the least, for Anthony Tolliver to have someone else to hype up with.

There are major cons to drafting Biyombo. Not just first overall, but in the lottery in general. Let's start with the obvious:

This team BADLY needs quality guard play. Love, Beasley, Randolph, Tolliver....or....Ridnour, Ellington, Telfair, Flynn. Which of those groups need the most help? I mean, c'mon...we've been harping on how disasterous our Pups are at the 1-2 for two years now. Why do we all the sudden want to pass on three probable fixes to that in favor of yet another big man?

Best case vs most likely case. Dovetailed on needing quality guard play is the specific guards available. Biyombo gets talked about as a potential "next" Ben Wallace, or Dikembe Mutombo, or even Kevin Garnett. Ok...but is that more likely to happen than Kyrie Irving reaching a Chris Paul/Deron Williams/Derrick Rose level? S-n-P has brought this up before: the Wolves need to side with the probabilities.

Great Nike Hoops Summit and high character. Also known around these parts as 6OTs and smiles.

Current skill level. Right now Biyombo is pretty raw. And....right now he's pretty raw. Potential is theoretical. 17 win teams should be much more concerned about the practical. Right now, Biyombo is a turnover-prone poor passer, with no jumpshot and no free throw shot, and a tendency to pick up cheap fouls by being overenthusiastic. He's a major project, and drafting him with the hope he might *someday* reach a 15ppg level or transform a defense a la Dwight Howard is a gamble, at best. Right now, when I look at Biyombo, I don't see Garnett, or Wallace, or Mutombo. I see Jason Maxiell.

Clippergeddon. Can a 17 win team really afford to spend it's last draft pick before Clippergeddon on a gamble? If he doesn't work out, there's no way to reset things. This team doesn't have great talent and isn't a free agent destination. The draft is the only sure way to improve the roster.

But.....here's the interesting part. Because of how weak this draft is, the Wolves...if they're smart (insert your favorite Kahn joke here)...could pretty conceivably draft Irving/Burks/Walker and Biyombo at the same time.

This is a pretty weak draft, and if you've been paying attention to the insiders and keeping tabs on the trades that have been made, you know that teams are fairly begging to get out of it. The most prominent examples being the Nets, who gave up two first rounders for Deron Williams, and the Cavaliers who have acquired two top-10 picks in the hopes that one will be the first overall.

So say the Cavs don't get Irving. That leaves them two top picks, nether of which will get them what they really wanted. See where I'm going with this? One would think that, sans-Irving, the Cavaliers would be pretty open to trading one of those picks. And in general, I would think a lot of the teams at the top of the draft would be willing to deal their pick for a fairly moderate price, if they can't get those one or two guys they kind are worth it. If the Wolves are really jonesing for Biyombo, make an offer for one of those picks.

Irving alone would right a lot of what ails this team. But walking out of the draft with, say, both Burks and Biyombo would go a long way towards it as well. Certainly much more than Biyombo alone.