Share All sharing options for: If the GM was named "Hoopus"... 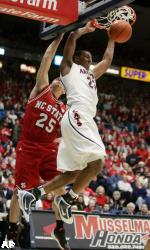 The third annual Hoopus Draft Poll was a success (well, ok, it'd be pretty hard for it to not be...) You cast your vote for your choice of #2 pick, and the result was overwhelmingly Derrick Williams. As in, he got more votes than the other 8 candidates and all the write-ins combined. I'd call that definitive.

So, here's the memory trip. This place has been doing the voting thing for three years now, and were you all collectively the GM of our oft-maligned pupsters, the team's last three drafts come June would be:

I think it's pretty safe to say we could live with that.

So, next up, we're going to try something new and vote on the later pick. We'll do a "full" board with this one; a list of names with the poll to pick an order. I'm going to go with DraftExpress' mock and list out the non-lottery guys they have penciled in for the first round. Write in a different name if you feel so compelled....I know there's a few guys like Demitri McCamey and JaJuan Johnson that have been talked about 'round these parts before.

Second, of course, is the possibility of trading that #2 pick. SlowBreak got us kicked off on it here. I'd say Mr. Kahn will do everything he can to make it happen. Question is, to who and for what? Like I said last week, this is Pandora's box, but I have a few general guidelines I think the team ought to follow:

1) Do the homework. Teams view this as a pretty weak draft. Some teams bartered their way out of it completely, and a lot of them aren't exactly jonesing to move up. Kings? Warriors? Rockets? Not likely to give up what they have to pick just 3 or 4 spots earlier. This trade will have to be with a team that is targeting a specific player that more than likely will be gone by their lottery-determined position. With that in mind, the two teams I'd target right away are the Wizards and Bobcats. Washington apparently has a thing for Enes Kanter, and the Cats are in all-out rebuilding mode. A #2 pick lets Michael Jordan make a much bigger first impression on the team than a #9 pick. You could also possibly sell the Pistons or Suns on moving up. Possibly.

2) Get a pick of some sort as part of the deal. Whether it be a lower one in this draft or one next year to make up for Clippergeddon. I will say that for me, the idea of getting a lower pick (or two) in this draft holds appeal. Again, teams aren't real high on this year's class. But simply because there's no guaranteed superstar doesn't mean there isn't talent to be had. If teams want out so bad they're willing to sell picks on the cheap, ending up with multiple picks in the #7-12 range could work out pretty well. Kanter could fall a bit. A lot of people like Biyombo. The combine measurements sold me more than ever on Burks, who's height/wingspan tested out in the Jason Richardson/Rodney Carney/JR Smith range. The lack of excitement for this draft means the Wolves could run the table, so to speak, and pick up lots of talent for less than it might otherwise be worth. Walking out of MSG this year with Biyombo and Burks wouldn't be half-bad.

3) Don't get cute. The kill-joy in all of our fantasy trades, of course, is we're not actually in charge of it. The #2 pick isn't something you throw away in a bargain-basement deal. Look at the draft history. Look at the track record. Look at the players Kahn has targeted before. Weak draft + long and athletic + veteran help + David Kahn = the #2 pick gets traded straight up for Amir Johnson. So before we all demand the pick be traded, let's ask ourselves: is the most likely trade scenario better than simply drafting Williams?

So that's that. Once again, ya got three days. Cast your vote, say your piece, and be happy the world didn't end.