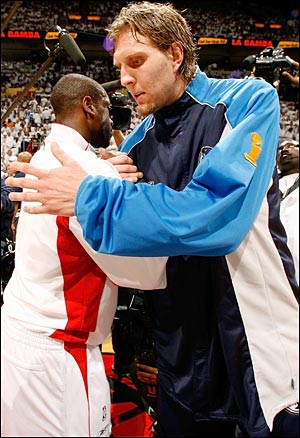 So here's what we learned (pay attention, Miami...): Don't take a lead against the Dallas Mavericks. Because that'll just make Dirk angry and then you're screwed.

Nowitzki just closed out one of the best individual series in NBA history in epic fashion....by bringing the Mavs back from impossible deficits not once, but twice. And that was after starting things off with a 48 point explosion in game one.

Oh, and one more fun fact. Since the 2006 Finals, the Mavericks have not lost a single game against the Heat.

No, you didn't drive to work in a lightning-powered Delorean this morning. The Heat and Mavs are really head-to-head in the Finals again.

Miami had their slugfest with the Bulls, fully exposing Chicago's one-dimensional offense and lack of depth. The Mavs took care of business on their end, using the experience and depth edges to their full advantage. The Thunder didn't play the matchup game....sending nominal power forwards Serge Ibaka and Nick Collison after Dirk....and paid for it big time.

The funny thing is, not many players are left on either team from that 2006 series. For the Heat, it's only Dwyane Wade and Udonis Haslem; for the Mavs, just Dirk Nowitzki and Jason Terry. Yet both teams are treating this one as fully personal, top to bottom.

"Everyone knows what this next step means. Everybody knows when you wear a Dallas Mavericks uniform, certain things come along with it. … As long as you keep talking about [the last Miami series], it's going to hang over us. Me, Dirk, Mark Cuban, [assistant coach] Darrell Armstrong, we sleep with it every night.

The Heat, of course, have added a few good pieces since 06 as well. That LeBron guy ain't half bad, I've been told.

This will, once again, be a series of matchups. Nominally, the Heat have a big advantage at shooting guard, with Wade matching up against either Deshawn Stevenson (who can't score) or Jet (who's like, half his size). The Mavs, meanwhile will slaughter Miami if they send Bosh after Nowitzki.

However, if the Heat go small and send LeBron after Dirk, while fielding Mike Miller at the 3 and Bosh or the recently-returned to health Udonis Haslem at the 5, things get a lot more interesting. LBJ has been nothing short of destructive defensively this postseason....but then again, Dirk has been on a historic offensive roll. And Wade at the 2 makes it awfully hard for the Mavs to field their favorite super-small-ball lineup of Terry and Juan Jose Barea. But the fact they have Jet and Barea....and Peja Stojakovic....to bring off their bench in the first place gives the Mavs a huge bench advantage.

Ultimately, I actually think though, that the guy who will decide this series is Tyson Chandler. He's a major x-factor, as the Mavs defensive anchor. If the Heat have one weakness, it's that their offense goes ice-cold when you rotate into their driving lanes. Joakim Noah and Taj Gibson did a masterful job of it in the ECF, and I'm sure the Mavs will be watching plenty of tape form that. Wade is a streaky jump shooter. LeBron is a streaky jump shooter. Miami's scoring is very dependent on getting to the rim. If Noah, Luol Deng, and Carlos Boozer can check them, one would think Chandler, Dirk and Matrix would be able to as well.

I'm going to go with the Mavericks in this one, for several reasons. One, they're the deeper, more balanced team. Two, they play strong enough defense to keep James from scoring at will. Three, Dirk Nowitzki. Four, they've dominated the Heat of late.

But more than anything, this just feels like Dallas' time. They've been as unstoppable as a team can be in the postseason, play with more swagger than Michael Jackson moonwalking, and have a major, major chip on their shoulder. They'll kill to win a title over the Heat.

And honestly, Dirk Nowitzki and Jason Kidd deserve it.