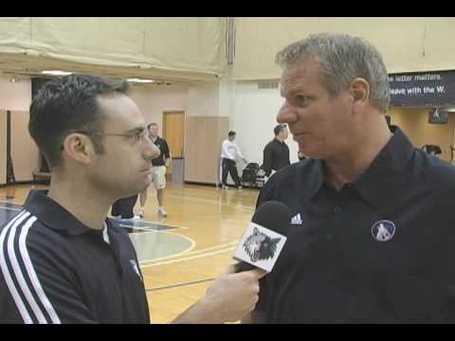 Jonah Ballow is the web editor / writer for the Minnesota Timberwolves. You can read his fantastic Wolves' coverage at http://www.nba.com/timberwolves or follow him on Twitter @jonahballow.

Last week, Jonah Ballow was kind enough to spend some time talking about writing for the Wolves, the MVP award, advanced stats and many other topics relevant to the Minnesota Timberwolves. The highlights of our conversation are below the fold:

Tim Allen: I imagine there are a lot of great things about your job writing for the Wolves, but what do you think is your favorite part?

Jonah Ballow: It changes all the time. There are a lot of things I love about it. It can get more difficult with the losing and with the changing of players, but I like bringing to light all of the good stories. Guys like Brian Cardinal and Corey Brewer. These are really great guys. I imagine when you write for the Lakers or the Celtics, it can be pretty easy sometimes. When you lose, you still have to find positives and the challenge is to stay relevant online, especially with three other professional teams in this market.

If you look at our Facebook numbers, they're incredible. We're beating playoff teams [in numbers of followers]. We have 56 thousand more followers than New Orleans.

Allen: I imagine it makes it easier when you have someone like Michael Beasley on the roster.

Ballow: Beasley and [Kevin] Love have been tremendous. When Beasley first came here, people had such a negative opinion of him, but he really is a smart person. He gets it. Before the season, when Beasley got asked, "who is the team to beat in the Western Conference," and Beasley said, "we are", some people thought that was crazy. But he's definitely on your side and you want guys like him on your team.

Love is great because he is willing to do a lot of these funny and creative things. He doesn't take himself too seriously.

Allen: How do you handle it when David Kahn comes out in public and makes questionable statements to the media? Has anyone ever told you to take anything out of a piece because it was too negative or too critical about the team?

Ballow: It isn't that much of a challenge. I write about what I feel is important for the team. My boss, Ted Johnson [CMO of the Timberwolves] is very supportive. I have never once, in three seasons with the team, been told to change anything or take anything out. I edit my own content and I have complete freedom.

My team is separate from the PR team and I hope that we do not have the reputation as just another arm of the PR department. My only real restriction is with trade deals, since I can't report anything until everything is officially done, but I certainly won't cover anything up.

Allen: We talk all the time about how the lockout will impact player, but how would it impact other team employees such as yourself?

Ballow: We'll see. That's kind of the elephant in the room. We're working according to the status quo right now. Obviously, things would change with a lockout. We wouldn't be able to have any player content, for example. Until games are lost, however, I don't think too much will be impacted.

Allen: How do blogs like Canis Hoopus impact your content and do you think blogs hurt or help your position?

Ballow: I think its all good. At first, I think the team didn't know how to approach places like Canis, since it is a competitor in a sense. But I welcome it all and think blogs like Canis are really starting to become top notch. People don't just throw up anything now. There is serious content written by people with good backgrounds. They often push us to be better and to look to the blogs for feedback.

There were many occasions last season where Canis got more hits than Timberwolves.com. We rely on links and coverage from Canis and T'Wolves Blog, etc. I know I certainly appreciate it and the team does, too.

Allen: What is your opinion of "analytics" or advanced stats? Do you use them in your material?

Ballow: Certainly, I look to advanced stats now and again, although I think some of these analytics are overrated. +/-, for example, is the dumbest thing ever. A guy can be on the court and do nothing for his team, but can still have a high +/- if the other four guys out there are playing well. I'm kind of old school in that way where I like to watch the game.

Derrick Rose, for instance. I know a lot of stats say that the Bulls' defense is better with him off of the court and all that. People who don't think Rose should be MVP are crazy. If you watch the games, you can see that clearly. A lot of what he does you can't measure analytically.

I'd like to see more stats around charges, around bench production. I've started looking more at StatsCUBE, but I'd still like to see more specific stats around certain players to see what those stats are worth. You can't account for where players shoot and hotspots. You can't account for a team's defensive approach. Look at how the Knicks defended Rajon Rondo, for example. You can't just put a lot of stock in PER or +/- or these other stats without watching the games.

Allen: What do you think about the argument, largely from advanced stat proponents, that Kevin Love's "Most Improved Award" was really not deserved since Love was really performing this well last year, he just didn't get enough minutes?

Ballow: I think its a credible argument. I really think that Derrick Rose was the best candidate for the Most Improved Player. But when you look at Kevin Love's stats and what he did this year, he needed an award. He averaged 20 and 15. The MIP award was really the best fit for him.

A tremendous thanks to Mr. Ballow for the interview.