The Death Star has exploded

Share All sharing options for: The Death Star has exploded 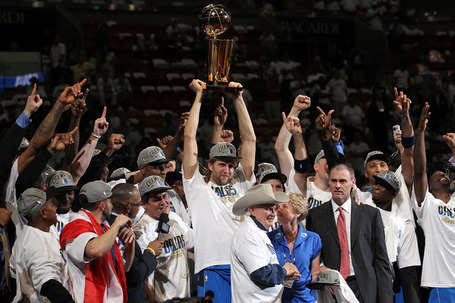 The Mavericks defied the Heat, the ghosts of their past, and just about every statistical projection, and won the 2011 Finals. Dirk Nowitzki and Jason Kidd finally get a well-deserved championship ring.

Oh, and Corey Brewer too.

For the NBA, this was fantastic. Dallas is a new face on the championship podium, TV ratings were way, way up (proving once and for all that there does not need to be a Los Angeles or Boston involved for people to be interested) and Dirk is a pretty ideal guy to be everybody's new hero. He's Finals MVP (as if there was ever any doubt)

For the Heat....and for LeBron James in particular....there's a lot of soul searching ahead.

And for the Mavs. Congratulations. You but on one of the best shows in recent memory. This was well, well deserved.

EDIT: I'm also very hopeful this means we can get the 3.7 million Heat writers off of ESPN's Twitter feed. Good God, enough is enough...