Final Thoughts on the Finals

Share All sharing options for: Final Thoughts on the Finals 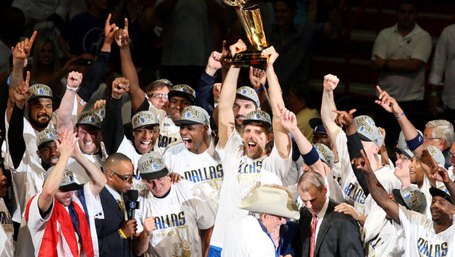 I've been resisting the temptation to say "I told you so". And while this isn't by any means just an exercise in gloatilation for me, I would like to point out that basically the only two people on the planet who explicitly predicted the Mavs taking the Finals were myself and Henry Abbott's mom.

Still, I do have a list of somewhat random thoughts pertaining to the Finals that I'm about to type down for you all.

-I do think the Mavs say a lot about the importance of building a balanced, complimentary roster. The Heat have immense sheer talent on their side, but no floor balance. All three of their stars are face-up, driving players with minimal post-up and jump shooting skill. The Mavs figured out that if you take away those driving lanes, all three end up at a loss over what to do and settle for jacking up bad jumpers. Dallas got around Miami's defense with superior ball movement and a roster that had shooters and post players to capitalize on the open spaces, something Miami's roster simply isn't able to do on the other end.

-To that end, I believe Tyson Chandler was every bit as much a Finals MVP as Dirk. And Mike Miller and James Jones co-opt as Finals anti-MVPS.

-I also believe that Dirk should have been regular season MVP this year. Finishing 6th in the voting is a joke, and only goes to exemplify how broken the voting system for all the awards are. Rose won because of his PPG, team's record and the fact he happened to have a fantastic game late in the season on national TV. But the reality is he wasn't even the best point guard this year, much less the best player. Dirk blew him out of the water in every category you'd think would influence and MVP vote...+/-, adjusted +/-, on court/off court difference, simple rating, and the basic fact that the Mavs sucked when he was on the bench and sucked even harder when he missed games due to injury. If you take an aggregate of individual performance and impact on team play, the list is something like Dirk, Chris Paul and Dwight Howard. Rose is like 9th or something. The NBA needs to fix how this is done.

-The Finals this year were a huge commercial success, posting some of the best TV ratings in a decade and generating unbelievable buzz. Contrary to the conspiracy theories, the NBA actually benefits when it's "marquee" teams bow out early.

-If you want my take on LeBron, I think it really is as simple as S-n-P said: for the first time in his life, he was genuinely challenged. His entire career, he's been able to dominate just by being LeBron. He was just naturally bigger, stronger, and faster than what anyone knew what to do with. Until now. To put it in maybe more relatable terms, I went through a similar thing in high school. In elementary school and junior high, I was one of those natural students who just got everything right away. It was easy. I think I probably did maybe 50 hours of homework actually at home all the way through 9th grade. But I also didn't develop any study habits, and that killed me in high school. It wasn't that I got stupider as I got older. I simply didn't know how to put in the work, and expand my study skills.

LeBron is a gym rat, but as S-n-P said, how much is his game really developing? It's been 7 years, and he's still a shaky jump shooter. He's still a shaky three point shooter. He still has no post game whatsoever. Which is absurd, by the way. The guy is bigger than Karl Malone. He could dominate the post from the SF spot in a way this league has never seen before, except he outright refuses to even try. It absolutely is a waste of his God-given gifts.

-By contrast, Dirk has completely mastered his craft:

-It actually is pretty amusing how big of a deal his fadeaway shot became this postseason. It got to the point where even he was laughing about it. Bizarre-looking shot, no doubt, but who can stop it? No one on the Blazers, Lakers, Thunder or Heat, obviously.

-I will say that I think the Mavs have to do some rather significant retooling to repeat (or at least, significant relative to being the defending champs). I think there's legitimate questions about if Kidd and Shawn Marion can play at this level again next year (or whatever year ends up being 'next'). They need more size at the 2 spot. They need to get more firepower on the wings. They absolutely need to resign Tyson Chandler. I feel like the Mavs are one of those rare teams that got through the window right as it was closing. I hope they understand what that means.

-I also want to say that these rumors Pat Riley will take over for Erik Spoelstra, or that he'll get Jerry Sloan to, are ridiculous. First off, Spo is beloved by Wade. Second, Riley has no interest in coaching full-time again, and Sloan has even less. As we noted when Sloan retired, NBA coaching jobs are incredibly stressful, both physically and mentally. Especially when you're 70 years old.

-The Heat are also still really well off, obviously. Even with the injuries, softness and neuroses, Wade, Bosh and James are three supremely talented basketball players. Give that team a real center and a couple solid guys who can catch-and-shoot, and it's lights out.

-I don't particularly like Mark Cuban, but I love what he's doing for the league. I hope his success kills the 'country club' angle NBA executives have. I hope it legitimately infuses statistical analysis into roster and coaching decisions. I hope the league realizes that individuals with character and personality are a far bigger draw than rich, old white guys who toe the company line.

-Kinda crazy to think that Corey Brewer and Brian Cardinal both have championship rings now. And crazier still, that they both actually played parts in getting them.

-Not so crazy: Tyson Chandler won a title instead of Eddy Curry.

Finally, the end of the Finals means the start of hardcore draft coverage. The Hoopus Big Board is finished, which we'll go over later. Also, keep checking in for updates on workouts, trade rumors, and the (hopefully) inevitable arrival of Ricky Rubio.