Share All sharing options for: The Best Professional Sports Team in Minnesota 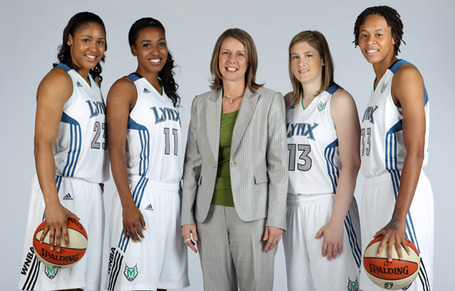 About two hours before the scheduled tip-off last night, a friend called me up and said he couldn't make it to the Minnesota Lynx' game against the Atlanta Dream. He asked me if I'd like to use his tickets. Since my original Friday night plans involved a frozen pizza and a rented copy of the King's Speech, I decided to take him up on it. Plus, the seats were in the second row - directly behind the Lynx' bench - and I thought that'd be pretty cool.

I'll be honest, though. I have been a big doubter of the WNBA. I was one of those guys who said things like, "the worst NBA player would win the MVP in the WNBA," and "they just don't have the skill level to keep it entertaining." I never really thought I'd be interested in the Minnesota Lynx.

Well, you know what? I was dead wrong. 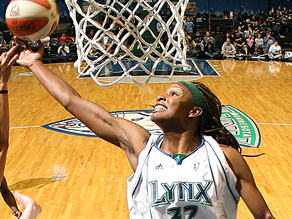 This isn't one of those, "they're pretty good...for girls," kind of stories. No, this is a, "they're really, really good," kind of story. As a Minnesota Timberwolves' season ticket holder who has not missed a home game in four full seasons, although I've seen my share of good individual performances, the Lynx looked like a much better team than anything the Wolves have put out onto the court in the last few years.

United We Run? How about 27 fast break points.

Efficient scoring? How about 16 points on 9 shots for Lindsey Whalen (with 8 assists and only one turnover in nearly 30 minutes) or 25 points on 14 shots for Seimone Augustus.

Double-double streaks? How about Rebekkah Brunson's 18 points and 14 rebounds, giving her a double-double in each of the first five games of the WNBA season, one shy of the WNBA record to start a season. She's also averaging 18.1 rebounds per 40 minutes (Kevin Love averaged about 17 per 40 mins this season).

Of course, that's not even mentioning Maya Moore, a two-time NCAA champion and the first female basketball player to sign with Jordan Brand, or former 6th Woman Award winner and all-time women's Pac-10 leading scorer Candice Wiggins. There is a lot of talent on this squad and it seemed that every player who stepped onto the court contributed to the victory.

How many times have you been able to say that about the Wolves since Kevin Garnett left? 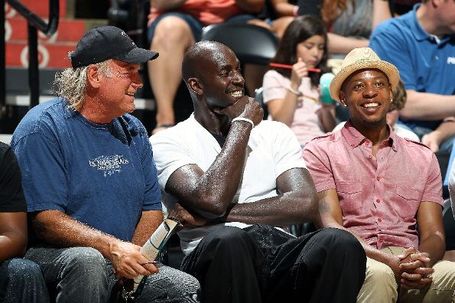 Speaking of Kevin Garnett, the Big Ticket was just one of the big names who was at the game on Friday night. Sitting courtside was Garnett, who had former Minnesota Governor Jesse "The Body" Ventura to his right and former rap sensation Troy Hudson to his left. Minnesota Vikings' defensive end Ray Edwards was also at the game.

Although the announced crowd of 7,556 was less than half of the Wolves' average crowd (15,242), you wouldn't have known it when they started cheering. Instead of grumbling die-hards (like myself), fair-weather fans wearing Kobe jerseys or people who got in free for buying a gallon of juice, these fans more closely resembled a high school crowd. Instead of people yelling at Jonny Flynn for dribbling yet another ball off of his foot, many fans were cheering on the Lynx as if they were watching their own friends or relatives out on the court. They jeered the refs at every call against the home team - whether the call was correct or not - and clapped for an admittedly-thrilling fast break layup as if it were the greatest play in basketball history.

Some might call it corny. I just thought it was great to see the fans reward the team for its play, and to see a team whose play deserved to be rewarded. 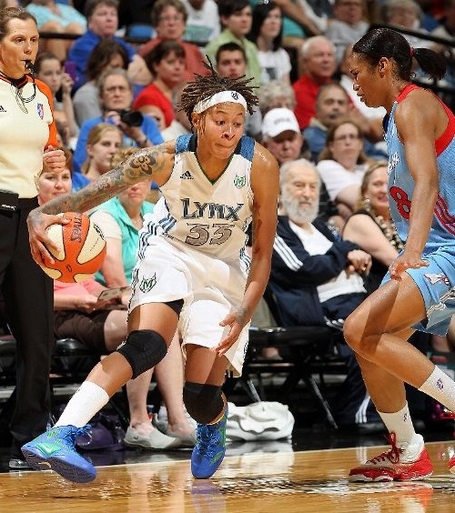 Noted sports writer and WNBA critic Bill Simmons once wrote, "How can [the WNBA] be salvaged?

The simple answer: It's can't...I tried to watch [a playoff game] Tuesday night. Forget about the jarring lack of athleticism, how nobody plays above the rim, how the playoff games lack the life-or-death emotion of those March Madness affairs. This was just subpar basketball. For all the talk about fundamentals, nobody was challenging shots or denying guards from penetrating into the lane. The two teams ended up shooting a combined 39 percent, even though they were getting wide-open looks on both ends. For every decent play, there were three bad ones.

And sure, maybe I just caught a bad game. But why would someone like me -- a die-hard sports fan who loves basketball -- watch this league on a regular basis? What's the lure? What am I missing?"

Sounds like something I might have said, too, not that long ago. In fact, a lot of sports fans I know (including some reading this right now) might have agreed, and might still agree, with that paragraph. After all, the attendance and the ratings are low. The athleticism and the above-the-rim plays can't match up to the NBA. The WNBA may never get the promotion and the corporate sponsorships that are necessary to be financially successful.

So why would a die-hard sports fan who loves basketball watch the WNBA on a regular basis?

Die-hard sports fans are the type of fans who appreciate dunks, but also appreciate fundamentals and efficient basketball.

I was one of those fans. It turns out that I just didn't know it yet. Go watch a Minnesota Lynx game.