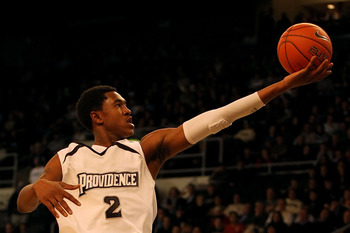 Canis Hoopus apparently has a bit of Jimmer-mania. Good stuff. Although he's killin' it in workouts, so it's looking more and more likely he'll be a bubble lottery pick (I think Indiana at #15 is the lowest he'll go)

Now, there was one guy who got in a good number of write in votes last time: Marshon Brooks. You Hoopusters really should be the collective GM, because you cast those votes pre-combine testing and Brooks was a consensus second-rounder. But he tested out spectacularly at the combine, standing 6'5" with a gigantic 7'1" wingspan (more reach than Al Horford, Charlie Villanueva, and Spencer Hawes, among others). He also was fifth in no-step vertical and tenth in max vertical. There's still major questions about his ball IQ, whether he can produce off the ball, and the dreaded transition from a college zone defense to man-to-man in the pros. But he's solidly in the first round now. Sehr Gut, Hoopen.

Oh, and don't forget to cast your vote for pick #4. You've got until the end of the day.