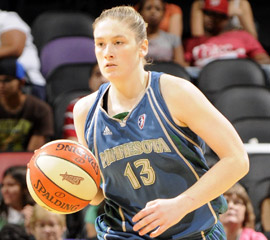 These are the top-5 point differentials in WNBA history.  The Houston teams all won championships led by Cynthia Cooper.  The Sparks won it all with Lisa Leslie.

After eeking out a tough, last-second, single-point victory over a scrappy Silver Stars squad, the Lynx saw their point differential at the 1/2 way mark of the season drop to a tie for the 4th best differential in league history.  Can they keep it up throughout the season?

The Lynx, sorry, Tigers have now won 8 or 9 games and are shooting 50% from the floor over that span with an average scoring margin of +12.2 ppg.  Championship quality ball.  Period.

The really scary thing about this team is that they haven't even come close to touching their potential.  Minny leans heavily on 6 women: Augustus, Whalen, Brunson, McWilliams-Franklin, Moore and Wiggins.  The team's biggest weakness right now is a lack of dependable depth.  Monica Wright and Amber Harris will take time to develop but Wright showed some nice flashes last year and is in something of a sophomore slump.  Harris was the player selected behind Maya Moore with the 2nd top draft pick and will hopefully be able to learn the F/C spot quickly by playing behind McWilliams-Franklin.  Beyond that, you're looking at players who don't see a whole lot of court time and a single injury could really cause this team a lot of problems, especially if it is to Brunson or McWilliams-Franklin.

As for this particular tilt, it was the Lindsay Whalen show. Whalen was +9 while logging 23 points (including the game winner with 1.5 seconds remaining), 6 assists, 2 turnovers, 7 boards and 4 steals.  While she played poorly against fellow All Star PG Sue Bird on Friday, she was back in top form today in Texas and the team needed all of her production to put them over the top.

How was San Antonio able to keep it close?

How did Minny win?

When you get out-boarded 43-28 overall and 9-3 on the offensive glass, you aren't doing yourself many favors.

This win was the type of victory we simply haven't seen from the men's squad in quite a few years: a team that doesn't have its A game going but wills itself to victory by scrappy play and by focusing on rebounding and defense.  Ultimately, they were able to win because the team gutted it out and put one of their best players in a spot to win the game in the final seconds...which she did. The Tigers are everything you want to see in the Wolves, but do not.

I can't say it enough: If you are not watching this team you are missing out on the best basketball played in this state since the WCF. That's 7 years ago.  Their next game is Tuesday at 7:00 vs Phoenix.  All of their games are available for free on line.  The WNBA even has a free ipad app to watch each and every game.