The streak is over

Share All sharing options for: The streak is over 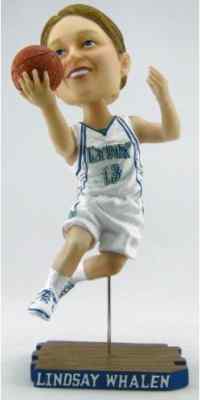 The Lynx really played some terrible ball in the last 45 seconds of the game.  A complete collapse, of sorts.  Turnovers, sloppy passes, no sense of of the moment.  It was kind of a weird and disappointing way to end an uptempo and entertaining game.

On the plus side of things, at 5:17 in the 1st quarter, Lindsay Whalen became the 6th WNBA player to score 3,000 points, 1000 rebounds and 1000 assists in her career (the other 5 are (Tamika Catchings, Katie Smith, Diana Taurasi, Vickie Johnson and Shannon Johnson).

Maya Moore went nuts last night.  She was 6-6 from beyond the arc with 28 points and 5 steals.  It was her 5th 20+ game.  Her perimeter counterparts Seimone Augustus and Whalen combined for 69 points with an eFG of .720%. Minny doesn't have much of a bench to speak of but they do have the best perimeter in the WNBA and it is only going to get better as Moore improves.  At one point during the game the Mercury announcer said that the Lynx were simply "too long and athletic".  Hey, at least it works for one team at Target Center.
Sooooo...why did the Lynx lose?  Free throws, free throws and more free throws.  Minny attempted their first free throw with 2:19 to go in the 1st half and they ended the game with 9 fewer attempts than Phoenix makes (13 to 22).  The first half was especially grating to watch as there were quite a few "let em play" moments that resulted in some make-up-ish calls for Rebekkah Brunson when the Lynx finally decided to simply pound the ball down low and hope for as much contact as possible in order to get to the line.
If the Lynx lose a playoff series, the lack of a decent bench and a paucity of free throws will be their undoing (with rebounding coming in a close 3rd).  The bench literally gave nothing last night, scoring 0 points and ending up with all players in the negative +/-- category.  Candice Wiggins clearly didn't have her game going and neither did Charde Houston.   The Lynx's starters are logging a ton of minutes and when they leave the court on an off night for either Wiggins or Houston, it is beyond noticeable.  Someone like Monica Wright really needs to step it up because even though a case could be made that the Lynx have the best player in the league at 2 or 3 positions  (hell, maybe even 4 on some nights), it's hard to win for an entire season with just starting production.
That being said, you can't win them all and the Lynx were still in a position to win the game late (tied 77-77 with 48 seconds to go).  The next game is Friday vs. the Chicago Sky.
Until later.