I ran my first 5k in 10 years on Saturday at Lake Nokomis.

Running and fitness thoughts below the fold.

This past Saturday I ran in the Merrell Naked 5k at Lake Nokomis.  The Naked 5k is the 1st barefoot race series in the country and it was also the first race I signed up to run in more than 10 frickin' years (I have run 1/2 marathons and 5 milers since then but my last 5k was in San Angelo, TX).

I'm clearly not at the point of getting back into running where I need to be thinking about race strategy and prep but as I strode up to the starting line of a race with only about 80-90 runners (more on that in a bit) the only thing I could think of was "Holy crap, I have completely forgotten how to run one of these damn things."

From the (lack of a) pre-race duce to a non-existant warm up routine, my 1st 5k in 10 years didn't feel weird until the starter said "go" (keep in mind that I didn't even feel weird about running in a barefoot race).  I got up at 6 in the morning, drove to our former neighborhood (we used to live a block from Lake Nokomis) with my wife, our youngest daughter and our 2 dogs, played at the park for a while with the itty-bitty and then lined up next to this guy: 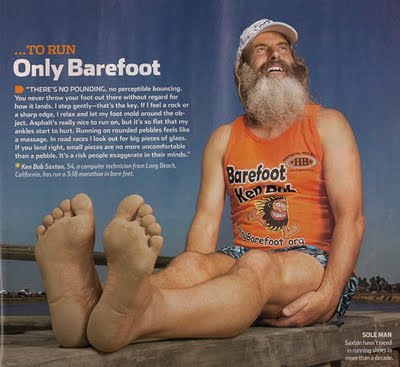 while waiting to run...well, I quickly realized that I had zero clue how I was going to run this damn race.  (BTW: Ken Bob literally wrote the book on barefoot running.  I highly recommend it and we pretty much ran the entire race together.  I even got a free once-over break down of my barefoot style.  It wasn't quite as cool as meeting Scott Jurek, but it was in the same ballpark.)

Anywho, with about a minute to go before running my 1st 5k in a decade I had to quickly figure out my approach.  Should I shoot for a consistent pace?  Should I shoot for a time?  Should I pick a runner who looks to be about on my level and designate him as a deer?  After about 20 seconds of flubbing around for a possible approach I came to the sudden (and random) conclusion that I should shoot for a time that was 10 minutes off my PR (15:22).  Since I didn't quite know how I would come out of the gate or how I would feel running along side fellow barefooters, I set my sights for how I used to break down races: in 2 or 3 parts.  This time around, I would take 2 parts.  In part 1, I would get warmed up and pick a few people to pick off in part 2.  Part 1 would be 2.5k and would take me 15 minutes.  Part 2 would be at a higher pace and I would pick a single runner to catch up to and beat in the final .25 mile. I may not be able to win a race, but I still know how to break someone's heart in the homestretch.

Bottom line: I was able to reach my goals.  I ran the 1st half of the race in exactly (literally) 15:00.  I ran slow and low and was able to talk to Ken Bob about Minnesota running, his time growing up in Michigan and his decision to switch to barefoot running.  In the 2nd half of the race, I selected a guy who went a little too fast out of the gate and ran him down, passing him with about a quarter mile to go.

What did I learn from the race?

First, there aren't that many barefoot runners in the Twin Cities.  According to the race organizers, this was the biggest Naked 5k in the series, so far. This race had Jason Robillard, Ken Bob Sexton and the leader of the local barefoot running scene.  It only had about 80 people in the race and I'm not really sure that the majority of them ran barefoot.  I have been very open about my distaste for the "movement" aspect of barefoot running.  I think that rubs a lot of people the wrong way and I think the barefoot folks are caught in between truly barefoot running and a "minimalist" approach.  This sort of non-black-and-white context makes it hard to promote a "movement".  FWIW, I'm a big fan of Robillard, Ken Bob and the Maple Grove Barefoot Guy.  I just was hoping for a few more "normal" runners who had decided (like me) to add barefoot running to their tool box.  I think that this is the "in" angle for traditional runners.

Second, I am a slow, slow, slow dude.  Speaking of tool boxes, the sub 5 minute mile isn't there anymore.  That being said,  it really, really felt good to cross the finish line at the time I was aiming for and with my 16 month old daughter yelling "daddy" right before the race announcer said "Nate Arch, crossing the finish line at 25:00...go Sooners!!!" (I finished at 25:10 and I was wearing a red Oklahoma shirt.)

Third, I am capable of running a mile in near 6 minutes but I simply cannot keep up this  pace for any sort of meaningful distance.

Fourth, someone won this race with a time just under 18 minutes.  This really pisses me off.  I want to win this damn thing in a few years.  The guy who won was, I think, a local high school cross country varsity runner with shoes and he won with an ok time.  I can't stand cherry-pickers.  I really wish I could have ran against this punk at the peak of my running prowess.

In non race news, I just made it to 20 miles in my slow weekend run.  My goal for next year is to run the Singing Hills trail from Mankato to Faribault.  It is 43 miles from my house to Faribault.  I think I can make it by next April.  I want to make this run as well as a 50k next year.  After that, I want to run the Voyager 50 miler up north.  I may no longer have speed but I think I can still have a decent amount of endurance.  I am at the point where I need GU packets and 2 bottles to make my weekend long run.  This is a good thing.

I have rolled back barefoot runs to 1-2 of my weekly training sessions.  My main shoe has become a Brooks Green Silence.  I love the damn things.  They are amazing.  I cannot recommend them enough.  My 2nd shoe is the Merrell Trail Glove.  Everything else is barefoot.  I really hope that Merrell and Brooks do nothing to their current Green Silence and Trail Glove models.  I cannot say enough good things about either shoe and I have already bought 2 extra pairs of both to keep me running with my favorite kicks for a long, long, long, long time.

In additional news, I cannot possibly recommend more of moving to a natural diet than....well, don't eat processed food.  I do not subscribe to a specific diet.  I do not have any sort of trick.  I simply eat non-processed food and I eat as much in-season food as possible.  Diet matters as much as exercise.   In the past month, I have gone from 225 lbs and 5 miles to 207 lbs and 20 miles.  I am aiming for a sustainable diet.  I am not looking at gimmicks.  Slow and low.  Natural and in-season.  The goal isn't  a PR.  The goal is to run happily until you're 65.  The goal is to walk your daughter down the isle in the same jeans you wore in high school.  Go Lynx, go Wolves, hire Adelman, run to be fit and happy...be cool with the world.