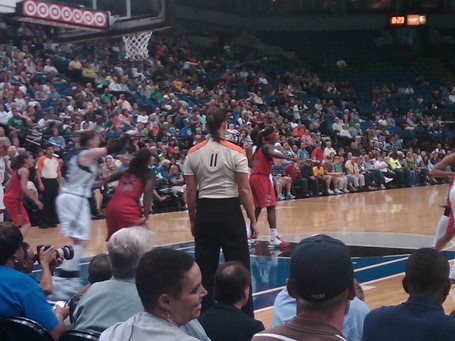 Let's dispense with a typical wrap-up and head straight for the bullet points. Why? Because I'm still trying to recover from a DJ Mad Mardigan sighting.  Seeing him spinning his wares on the video screen in the concourse during halftime was...well, soul shivering.

Well folks, that about does it.  The Mystics gave the Lynx a tougher than expected game tonight.  The Lynx pulled out quickly but let Washington get back into things when McWilliams-Franklin headed to the bench.  This pattern continued until the Lynx pulled away in the 4th with some big help from their bench.  Whalen was lights out and McWilliams-Franklin anchored the defense.

One final thing, thanks to the Nicky Anosike trade, the Lynx own the Mystics 1st rounder next year and...well, the rich get richer, I suppose.