The End of the Beginning

Share All sharing options for: The End of the Beginning

The Lynx wrapped up a playoff berth and the best record in the WNBA this season a long time ago, but that didn't stop them from playing full force in the season closer against the Phoenix Mercury. The two teams played a competitive first half, then the Lynx pulled away in the third quarter and survived a barrage of three-pointers in the fourth to take the game 96-90. 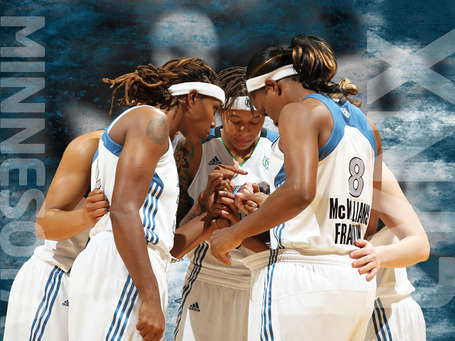 The Mercury in particular played their starters quite a bit for a game that meant nothing. Forward DeWanna Bonner played 30 minutes. Diana Taurasi played 25....long enough to score 19 points and secure the season's scoring title, her fifth in six seasons. The Lynx were a little more conservative, topping their starters out more in the 22-23 minute range. But they certainly didn't ease up on the competitiveness.

The bench still needs a great deal of work. With Candice Wiggins, Monica Wright, and Charde Houston, the talent is obviously there....Wiggins would start on a lot of teams and Wright was a full-time starter for 'Sota last year and handled the roll well. But all season, the bench has struggled to build an identity and play with consistency. This team wins on the strength of its starters. But when those starters are twin tower forwards, the frontrunner for Rookie of the Year, and two legit MVP candidate guards, I suppose you can afford to do that.

Maya Moore is the new Golden Girl in town, but it's very much been the veterans that have carried this team. A clear case can (and should) be made for Lindsay Whalen as the best point guard in the league. Not only does she lead the WNBA in assists, she also shoots the ball at over a 50% clip, while displaying a creative edge reminiscent of Nikki Teasley in the LA Sparks' heyday.

Rebekkah Brunson doesn't have the sheer size or scoring touch of a Sylvia Fowels or Tina Charles, but she doesn't give up anything in toughness or effectiveness. Third in rebounding average, she and McWilliams-Franklin (who always strikes me as the Lynx's Ervin Johnson) have anchored this team this season. Women like Lauren Jackson and Lisa Leslie have pretty conclusively proven that height and reach matter in the WNBA too. At the least, you have to be able to contain it, even if you aren't quite 6-6.The Lynx acquired Brunson with the second pick in a dispersal draft after the Sacramento Monarchs folded, and all she's done since is outplay Nicole Powell, the woman selected before her. 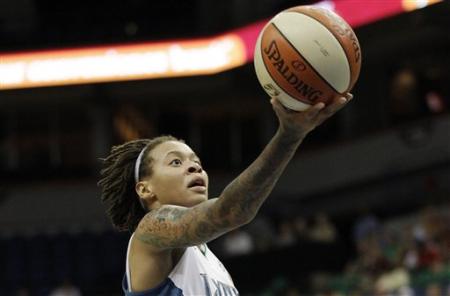 And of course, there's Simone Augustus. I remember when she was drafted in 2006 (hard to believe it's been 5 years now) and she marveled at how inconspicuous she felt. Her collegiate years at LSU were marked with constant fame and fandom....multiple Wade trophies, multiple Naismith and Wooden awards, multiple SEC Player of the Year recognitions. To go from that to Minnesota....where she could walk down the halls of Mall of America and not a single person would recognize her....was a big, big change. But unlike most celebrities...and most of her male counterparts....Augustus never went in search of the spotlight. She didn't resent her anonymity, she embraced it. She dedicated herself to the basketball court....at a time when the Lynx were truly horrific, having just dealt away the very talented and very popular Katie Smith....figuring that she'd just focus on what she could control and let the rest fall where it may.

Even now.....despite being the player who's been with the team the longest, it's scoring leader, and (in my opinion) it's best player....she's still the overlooked gal, taking a backseat to the charms of Whalen's homegrown story, the glitz of Moore's rookie campaign, the buzz of Wiggins' social network. But for the woman who's been here from the start, who's endured the losing seasons and repeated disappointments and constant coaching changes with nothing but dignity and hard work, I can't think of anyone more deserving of credit right now than Simone.

The Lynx begin their first ever playoff appearance on the 16 against the San Antonio Stars, led by longtime WNBA veteran Becky Hammon. Then they face either another rematch against Taurasi and the Mercury (who have given the Lynx more trouble than any other team this year) or the defending champs Seattle Storm and their every-dangerous duo of Lauren Jackson and Sue Bird.