This one can pretty much be chalked up to sheer power. The team started the game by putting their inexperience and nerves on full display, finishing the first half down by 3. But the overwhelming talent edge was too much for San Antonio to hold off forever.

Maya Moore and Cheryl Reeve were honored with the Rookie of the Year and Coach of the Year awards respectively, but it was the team's veterans who carried the game. 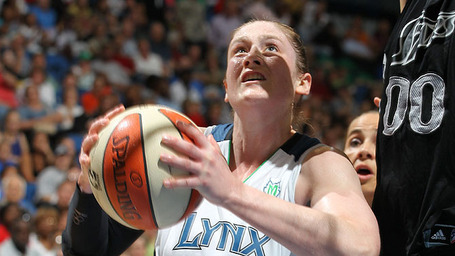 Lindsay Whalen and Simone Augustus combined for 39 of the Lynx's 66 points, while Rebekkah Brunson did her best Lady Rodman impression, scoring just 4 but gathering an impressive 14 rebounds.

Words cannot do justice to just how good this team's backcourt is. Between points and assists, Whalen accounted for 18 of the Lynx's 33 first half points, nearly singlehandedly carrying them through the jitters. In the second half, Augustus came alive, scoring 12 of her 19 points after the break. They shot a combined 47%. The rest of the team shot 32%. The Stars have a pretty damn good guard of their own in Becky Hammon, but she was defending the Alamo tonight, trying to match two of the WNBA's best by herself.

The bench is still anybody's guess. Tonight, Stars reserve Danielle Adams literally doubled the entire Lynx reserve squad all by her lonesome (16-8). That's needs to change. 'Sota can take the series against SAS with that, but they won't beat the Mercury or Storm that way.

But a successful first game for the rebuilt Lynx. They blew it up, stockpiled talent, found a good coach and made it back. Despite what certain other pro 'Sota teams of the male persuasion would like you to believe, it's not rocket science.

Game 2 is Sunday at 4pm. It's on ESPN2. You have no excuse. Be there or be...excommunicated (because honestly, threatening to turn you into a shape is just nonsense...)