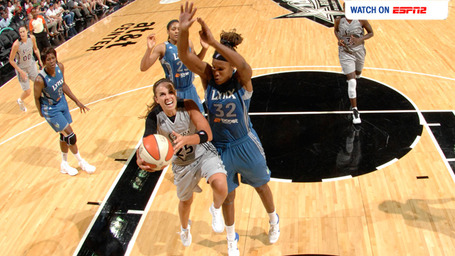 Even though it cost the Lynx the win and a chance to take the series, it was hard not to enjoy watching Stars guard Becky Hammon play today. The veteran showed why she's one of the best.

She adjusted her game, relenting the fact she can't out-do both Whalen and Augustus at the same time, and turned it into a team battle that resulted in fantastic over-the-board production from teammates Jia Perkins and Sophia Young. They normally put in about a combined 20 points a game. Today, they put in 47, taking advantage of Hammon's ability to carve up 'Sota's interior 'D'. The Lynx repeatedly got caught over-rotating or not rotating at all, resulting in a slew of open looks and foul shots for the Stars.

There's definitely something to be said about having played the most playoff games in WNBA history.

Game 3 is Tuesday back at Target Center. Not sure is any broadcast info has been released since this was a TBD game. I'll let you all know when I know.