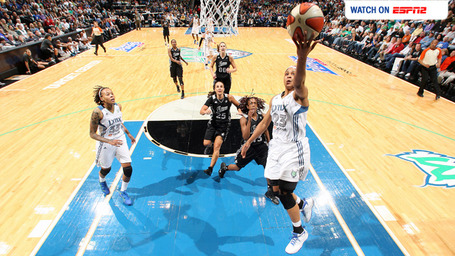 The Lynx are headed to the conference finals.

After a bit of a shaky start (down 10-2 at one point), 'Sota took a deep breath, relaxed, and played like the 27-win team they are. Moore didn't get saddled with fouls. Taj turned herself into a gladiator. No one....and I mean no one....could stop Seimone Augustus.

Sunday, I suggested the Lynx should turn game 3 into a war of attrition, and that's exactly what they did. Becky Hammon was an island by the end of this one. A very tired island. She did as much as any one woman could possibly be asked to do in her situation, but when the Lynx calmed down, they remembered they have what to the Stars is an insurmountable talent edge.

This was honestly the most fun I've had watching any Minnesota team in years. These ladies work hard and play hard, and deserve ticket sales and front-page coverage a hell of a lot more than the Vikings or Twins. If you're not watching, you need to be.

So the Lynx take on the Mercury next....the team that's given them the most trouble this season and forces the most difficult matchups. What does the team do with Diana Taurasi? Asking a rookie...even one as good as Moore....to go head-to-head with a 5 time All-Star, MVP, and WNBA champion is too much. On top of that, 'D' can legitimately play anything except center. As a point guard, she'd be way too big for Whalen. As a power forward, she'd be too fast for Brunson. The Lynx need to really gameplan this.

Definitely don't miss this upcoming series. MIN/PHX could be the best three games in WNBA history....two fast, athletic, high-scoring teams (PHX was #1 in scoring this year, MIN #3) playing for a shot at the Finals. Game 1 hasn't been officially announced yet, but going by normal scheduling and the ECF slate, I'd guess it'll be Friday.

EDIT: The WNBA has updated it's schedule. Game 1 against Phoenix is Thursday (as in, two days from now) at 8pm. Not sure why they decided to do concurrent days instead of alternate.