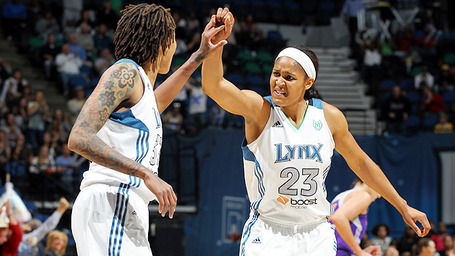 I'll start this game wrap the same way I ended the game thread: I honestly don't think Diana Taurasi has ever lost a game this badly in her life.

If you had told me at any point this year that the Lynx would beat the Mercury by 28 in the playoffs, I would have literally died laughing. The Mercury don't get blown out by anyone.

Except tonight they did.

Game 3 against the Stars was the best game any 'Sota pro sports team has played in a long, long time. And this was even better. The Lynx took an early 15-3 lead and (unlike a certain purple horned team...) never looked back. Even when the Mercury rallied to close the gap to 6, it never felt like they really had a chance.

Everything that could have gone right for the home team did. Their shots fell. Phoenix's didn't. 'Sota won the glass, won the free throw line, won the hustle plays, and otherwise so thoroughly vexed the Mercury that a couple of their players went Ron Artest....erm, excuse me.....went 'Meta World Peace'....blatantly shoving Lynx players to the deck in frustration (att'a girl Wiggins). The Mercury haven't looked this dysfunctional since before 'D' was drafted, and that says a hell of a lot about your home town ladies.

Game 2 is going to be very, very interesting. If there's one thing we know for certain about Taurasi, it's that she's ultra-competitive. She'll be angry, and she'll look to take it out on the Lynx. I also expect the Mercury to float some serious mis-match rotations. They really messed up the Storm with some unconventional lineups, like putting Taurasi at point guard and fielding three 6'4" players in the frontcourt.

Sunday, 4pm. ESPN2. You will watch, or I'm throwing a tantrum in all capital letters. Seriously. I am this close to hitting caps lock.