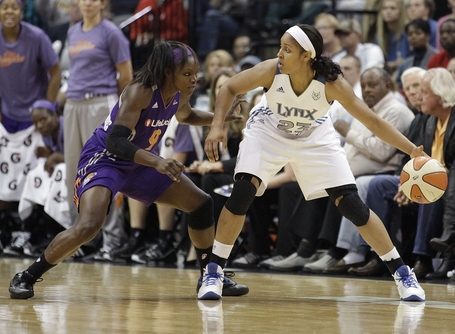 Today, the Minnesota Vikings-Detroit Lions game is a warmup for Game 2 of the Western Conference Finals. The Lynx won Game 1 by 28 points (95-67) and were in control throughout. Minnesota had five players score in double figures, led by Seimone Augustus, who had 21.

The game is in Arizona at 4 P.M. CST and the Mercury must win to stay alive in the best-of-three series. It is being televised on ESPN2.

The Indiana Fever defeated the Atlanta Dream on Thursday with an 8-point win in Game 1 of the Eastern Conference Finals. Game 2 of that series is today at 2 P.M. CST and is also on ESPN2.

And if you're still not convinced that these WNBAers have game, watch the New York Liberty's Cappie Pondexter go against NBA guard Sebastian Telfair: