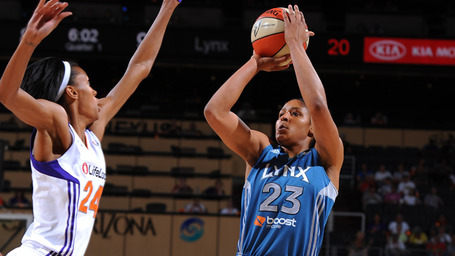 The Minnesota Lynx have swept the Phoenix Mercury out of the Western Conference Finals.

The Indiana/Atlanta series still has one game left, so the Lynx don't know who they'll face in the finals or when that will be yet. Personally, I hope Atlanta pulls off the upset. The Lynx can beat either team, but will have an easier time not having to face Whalen's former backcourt mate Katie Douglas and league MVP Tamika Catchings. And the Fever crowd is one of the best in the league too....Conseco Fieldhouse is one of the most charming basketball arenas in the world, but it is not friendly to visiting team.

The Lynx swept the Mercury out of the WCF. We actually have a professional sports team in this state competing for a championship. Hugs for everyone. Except the paper editors who will inevitably put that pathetic excuse for a football team on the front page tomorrow anyway. For them, I say send inappropriately-worded letters of complaint.