Lynx open thread and a suggestion

Share All sharing options for: Lynx open thread and a suggestion 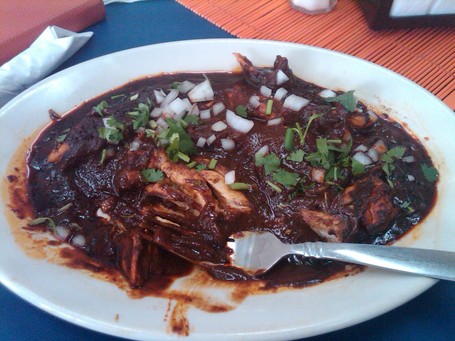 Last month my favorite Mexican restaurant was robbed (the thieves took the register, a TV and some kitchen equipment).  It's a little family-owned joint over on University and Victoria in St. Paul called Homi and its specialty is home style cooking (comida casera).  Everything is made from scratch and can roughly be translated into Minnesotan as the Mexican equivalent of having your mom make you a hotdish.

They've gained kind of a die-hard (but small) following in their short existence and they've even made it into a Heavy Table write-up:

Just don’t expect your plate of solace to emerge from the kitchen in two shakes. Everything at Homi is made from scratch, usually by owners Miguel and Hortencia. "Homi" is a combination of their first names. The married duo hails from Hidalgo and Veracruz in Mexico, but they cook up comida casera (homemade food) from all over their home country. Enchiladas, moles, empanadas, tamales, and caldos (soups) just scratch the surface of their gigantic menu, which also includes choices for children and take-out options. Homi’s the sort of place where, on a lazy Thursday night visit, the only noise rises from a cheery gaggle of the restaurant’s family members hanging out at a corner table, inviting you in their unassuming way to put up your feet and dig in.

I cannot say enough good things about this place.  I have never had a bad bite of food there.  Each plate is lovingly prepared and is presented to you exactly as it looks on the menu picture.

Earlier this week I went in to get a plate of chilaquiles and I got there around 5pm.  I was the only person there.  I chatted up Hortencia (who, by the way, will cook whatever you want on the menu exactly how you want it--don't be afraid to ask for, say, chopped cilantro, onion and a lime for your plate of beans and your mole) and she said that business has been really, really, really slow with the light rail construction and the Fair.  On top of that, they just got robbed and one of her daughters was working the till while the crime occurred.

If you're over in the Frogtown area of St. Paul (or if you want the best Mexican meal in town), head on over to University and Victoria and give Homi a try.  You won't regret it.

BTW: I highly recommend the Mole con Pollo, the green chilaquiles and the Menudo. That being said, everything on the menu is delicious.