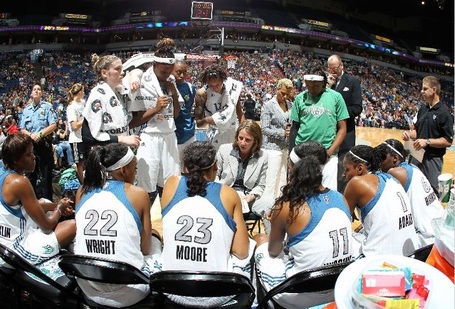 Those dates represent the last time each team finished the season with the best record in its respective league, which is what the Minnesota Lynx will do this season. They clinched the #1 overall seed on Friday night (after Connecticut defeated Indiana), despite losing the game to New York. Don't worry, they went to New York yesterday and got some revenge, winning 86-68.

There are only two games remaining in the regular season and the playoffs start on September 15th. The Lynx have had 6 consecutive games with 8,000+ in the stands and have averaged 8,393 people this season, their largest average attendance since 1999. People like Donovan McNabb and Kevin Garnett have been out to games this season and Jesse Ventura has a season ticket. As a result of the team's popularity, the Lynx are opening the upper deck of Target Center for the postseason.

As of today, the Lynx would play the San Antonio Silver Stars in the first round. The Lynx swept the season series with San Antonio 4-0.