The Timberwolves swapped Kurt Rambis for Rick Adelman this offseason. After 10 games, I'm looking at the numbers to see if this seemingly important change really made a difference. 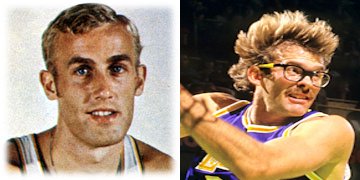 Timberwolves fans spent the last two seasons tolerating one of the worst coaches in NBA history. Kurt Rambis has a career winning percentage of 0.279, and tallied an abysmal 0.195 during his tenure with the Wolves. I will be the first to tell you that winning percentage is a sloppy way to assess coach quality, but in all seriousness, Rambis is a terrible coach. This was true during his last two seasons with our puppies, and was probably true when he was winning with the Lakers.

…Asked about Rambis as a coach, O’Neal had nothing to say at all. He also hung up, called back and said ‘That’s what I like about him."’

I would argue Rambis' biggest flaw was in his rotations. I really think I could sum up this entire discussion with "Kurt started Ryan 'fuckin' Hollins over Kevin Love." What more need I say? In the face of all objective evidence, Rambis was convinced that Kevin Love was destined to be a 6th man. 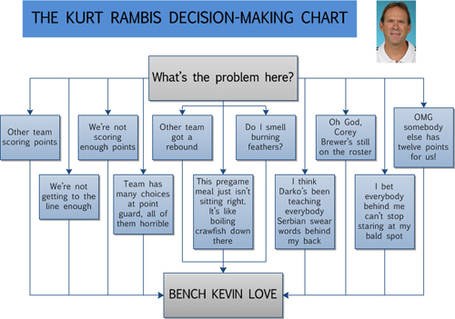 I'm pretty sure he was prepared to stick to his guns on that one right up until his hand was forced by 31-31. It wasn't just Love either. Kurt was very consistent in the incoherence of his rotations. In fact, Wolves players had a 6th worst 0.28 correlation between wp48 and minutes played in 2010/11. I don't have the data, but I would wager it was considerably worse in 09/10. While Rambis "brought Love along slowly" in 2009/10, he forced incompetent Jonny Flynn down our throats. Even though he had the young and established Ramon Sessions warming the bench all year. This offense was made almost excusable by the fact that Rambis completely neutered Sessions' productivity:

Rambis' putridity was not limited to his rotations. He also had some obvious shortcomings as a strategist. His "triangle" scheme made the Wolves' worst offensive player, Darko Milicic, the focal-point of the offense. Kurt persisted with this strategy in the face of Darko's impressively bad 19.37 turnover rate and 48.2 TS%. When Rambis wasn't dumping the ball into Darko and letting him "work his magic", he was forcing the tempo. Sometimes it can be useful to push the pace, but not when you have one of the highest TO rates in the league and only one player (Love) with a useful fast-break skill-set. On the defensive end, Rambis challenged NBA players to beat the Wolves with open 3s. They did. Rambis also guided the Wolves to a significantly below chance record in close games. NBA Playbook's Sebastian Pruiti provides ample evidence that "bad luck" is not to blame:

"...This is 100% on Kurt Rambis. He has to know whether or not he wants to call a timeout and communicate that with his team. This isn’t a situation where the defense throws something strange at the offense and they are forced to call a timeout. This is just Kurt Rambis being unsure of what he wants to do, leading to confusion. As Ridnour brings the ball up, you can just see the confusion from everyone on the Timberwolves..."

"... No screens, no off the ball movement, nothing. I don’t understand (and I don’t think I ever will) why coaches rely on players to try and create a three point shot. When they do that, they are handcuffing their players so much, and that is exactly what happens here. Tyrus Thomas is defending the three and the three only, meaning that Beasley can’t get a clean look. You don’t have to run anything all that complicated here. You could run a pick and pop with Kevin Love? Think that is too complicated, you can just set a screen for him. If you want to get really crazy, you could start with Beasley off of the ball and set a pindown for him. All of those are better options than giving Beasley the ball and asking him to make a contested three while the rest of his team stands and watches..."

"... This, combined with the Beasley ISO set on Wednesday makes you question coach Rambis’ ability to draw up an effective play late. He has had three situations coming out of a timeout, needing a three pointer and he has drawn up exactly one play. Sometimes you don’t need "set plays" late, but I feel like in each of these situations, they were needed..."

"...What it comes down to is coach Kurt Rambis and his inability to draw up a play in late game situations. To me, it almost seems like he lacks a plan late in games..."

"...I hate to keep writing about Rambis and his poor coaching decisions because it sounds like bashing, but over the course of this season we have seen this become a trend. From running the same play twice in a row late despite it not working the first time to poor clock management late in games, Rambis simply struggles with his decision making late in games. It is as if he doesn’t know what he wants to do..."

Kurt Rambis is a terrible coach. Let's all take a second to appreciate the fact that we will never again watch him mismanage our squad.

That was fun, but I don't think I really changed anyone's mind with that rant. Kurt didn't have many backers by the end of last season. The more interesting issue here is whether or not the switch to Adelman has actually made a difference. Sure Adelman has a long track-record of success (.603 career win%) and is among the most respected coaches in the league. But there is legitimate debate over how much impact coaches really have. Dave Berri has published a study showing that coaches have only a minimal impact on team performance. He looked at 62 NBA coaches across thirty years of data and found that only 14 coaches had a statistically significant and positive impact on player performance. Another WoW contributor, Arturo Galletti, argues that what impact coaches do have comes exclusively from how they allocate their minutes. This is an area where Adelman outperforms Rambis, but given how few competent player the Wolves have, it may not make much of a difference. The fact that the Wolves are sitting at the same 3-7 record 10 games into the season lends further credence to this pessimism.

Anthony Tolliver at least thinks Adelman had made a tangible difference...

and in this case, I tend to agree with him.

Even the greatest coaches can't polish a turd (see Wes, Beasley, Darko), but there are legitimate ways that better coaches milk wins out of NBA quality players. Galletti is right to point to minute allocation, but good coaches also find ways to get their players better shots, and force other teams into taking bad shots. The way that Adelman has adjusted the shot distribution for both the Wolves and their opponents is going to be the focus of the rest of this post.

Here are the league average shooting efficiencies from different locations on the court:

These are the numbers for just 2012, but they are pretty consistent with the numbers we see every year. From the Darko hook to the Beasley "step across the 3-point line J", the mid-range game is dead for a good reason. Teams who force their opponents to take mid-range shots while attacking the rim and draining 3s will consistently win basketball games. Luckily for the Adelman-lead Wolves, coaching schemes seem to have a significant impact on these distributions.

The single biggest impact of a good coach comes on defense. In fact, there is some evidence that coaches are considerably more important to defensive success than players. Last season, the consistently excellent Ty Willianghanz of Courtside Analyst looked at defensive win scores and found that "coach" was a much better predictor of defensive performance than "players".

On the other hand, the correlation coefficient for teams that changed coaches, whether those teams maintained their core group of players (like the Chicago Bulls) or did not, was a measly 0.121."

This analysis only looked at teams from 09/10 to 10/11, so things might change looking at a larger sample, but the initial implication is pretty amazing. Take the same players and switch out the coach, and you have no idea how well a team is going to perform defensively. Introduce a coach to a random NBA team, and you can project his previous teams' performance onto the next year with reasonable confidence.

I would argue that this phenomenon comes largely from good coaches' ability to dictate where other teams take their shots. At least in our case, the data seems to support this interpretation:

Last season, Rambis's "unique" strategy of ignoring 3-point shooters was relatively effective in keeping opponents off the rim, but we paid dearly for it in trifectas. This season, Adelman has managed to limit our opponents in both forms of efficient scoring, and in doing so, has shaped our "opponent shot profile" to look considerably more like that of the 2011 Rockets than the 2011 Wolves. While last season's Wolves only forced opponents to use 45.8% of their shots on mid-range junk, the Rockets forced their opponents to take more than half in the "danger-zone". Thus far, Adelman's Wolves have actually outperformed his Rocket's in forcing opponents to take 53.3% of their shots from mid-range, while bringing down both our opponents' shots at the rim and from three.

While there isn't as much general evidence for a coach effect on offense, it looks like Adelman has had a similar effect on our own teams' shot distribution:

Minnesota's 2012 shot distribution looks remarkably similar to Houston's 2011 distribution. Both teams did an excellent job of avoiding reliance on the mid-range game, and fired off a good percentage of shoots at the rim and from three. On the other hand, the 2012 Wolves look nothing like the 2011 Wolves who attempted more than 50% of their shots from midrange.

Ricky Rubio is one obvious confounding factor in our improved shot distribution, but looking at Houston's change in the wake of Adelman provides some evidence that Adelman has played a role in this transformation:

McHale's Rockets are taking 5% more shots from mid-range than Adelman's Rockets did. Given that the Rocket's have not seen much turnover in player personnel, this difference is likely to reflect variations in offensive scheme. McHale seems like a fine coach, but teams that limit mid-range shots like Adelman's apparently do, are going to win in the long run.

Let's put this all together with a quick statistical summary:

XeFG% gives a team's "expected" shooting efficiency based on league averages from different places on the court. OXeFG% does the same on the defensive end of the court. We currently have the 9th best XeFG% (48.5%) and the 4th best "OXeFG% (47%). We only trail Denver and Orlando in net expected efficiency. We are currently under-performing these expectation, but the change in distributions on both ends of the court has clearly had a positive impact. 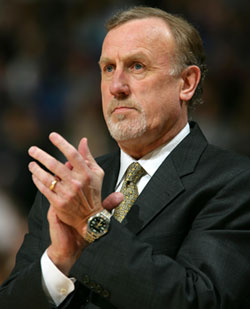 Most of the statistics I used in this post came from the excellent Hoopdata.com