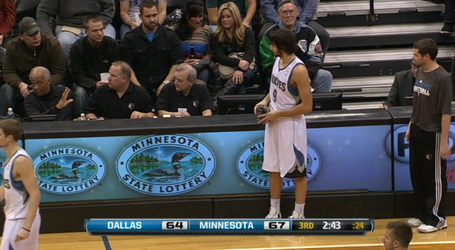 Yes ladies (and gentlemen), they do exist.

First things first. That was 18 losses and 295 days since the last regular season victory. That's a long time. Slow clap away.

Second, the Wolves now have a positive point differential after playing the Heat, Thunder, Bucks, and last year's champion. They have done so with two awesome players while spotting opposing teams 3 starters (this is probably not fair to Luke Ridnour, but he has competent backup production).

Take a look at the roster. Scroll down to ortg and drtg and look at the differentials. Granted, we're dealing with small sample sizes here but Kevin Love and Ricky Rubio (and JJ Barea!) are really pulling their weight while not getting a ton of help from their non-reserve running mates. It will be very interesting to see how this plays out over a larger sample. I really think Wes Johnson has a Sasha-level -30 ortg/drtg season in him.

With the tail end of a back to back on the horizon I'll keep this short and sweet. The best part of this game was watching two excellent pro basketball players take the game by the throat and bring home the victory. This hasn't happened in quite a while.

When Dallas pulled within 2 points with 5 minutes to go, the box score became a seemingly endless string of...well, this:

In three minutes they went from 84-82 to 98-82. They did it by handing the ball to the Spanish Unicorn and letting him find open options. Their best players did the work. This isn't rocket science or zen apprenticeship.

Well folks, that about does it for tonight. Losing really, really, really sucks and it was nice to see a good victory over a good (at least in theory at this point) team. The Wolves have played 4 games and competed in all of them despite having only 2 good players, no competent wing player, and while relying heavily on their bench. Rick Adelman continues to start the same lineup responsible for 17 wins last year but you get the sense that he is doing so to make some sort of point to his players. It doesn't take a genius to see that Team Adelman hands out minutes to players who do well and the starting label doesn't mean a whole lot when you start to play under 20 mpg for reasons other than injury while watching the game conclude from the end of the pine. These early games are handing players all the rope they need to either pull themselves up or to hang themselves with. All the while, the team is still competitive thanks to the outrageously good play of its best two players. They're close. They have obvious flaws with realistic fixes. They're finally under solid supervision. Find a 2 or a 3! Any decent one will do. Hell, call up Otis Smith and ask for this guy.
Until later.