Still Going to Look Ahead

Share All sharing options for: Still Going to Look Ahead 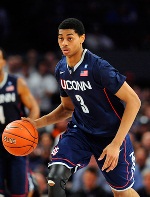 At 7-9, the Wolves are actually.....wait for it....respectable! (Of course that still leaves us dead last in our outrageously competitive division) So we thankfully haven't been mired in the equally outrageous process of thinking about the draft after just two weeks of the regular season.

That said, if the last few seasons have taught us anything, it's that it's never too early to think about the draft.

I still have high hopes that Martell Webster can provide consistently good play for this team. I still think Malcolm Lee can as well. I think Ellington is going to become increasingly valuable as he eases into the Doug Christie role in Adelman's system. I still hope the front office finds a way to trade for a Nic Batum or Ray Allen.

And, I hope they also find a way to get back into the first round of this draft, because there's talent there the Wolves would be very, very sorry to miss.

Now, I gotta tell you guys, this game was one of the most impressive showings I've ever seen in college ball, both from a freshman and a big man. Anthony Davis gets basketball. People are going to gravitate to his athleticism....and don't get me wrong, this guy is athletic....but there's so much more to him. He gets how to move off the pick-and-roll. He gets how to position himself for rebounds. He gets how to rotate on defense. His shot blocking is absolutely incredible, not because he gets a lot of them, but in the way he gets them. Davis is averaging 14 points, 10 rebounds and 5 blocks a game, shooting a ridiculous 63%. As a freshman. He's a perfect storm of , size, hops, talent and IQ on both ends of the floor.

Also, credit John Callipari for understanding what he had and adjusting his system for it. Cal is a guard's coach, and it showed early. For a couple weeks at the beginning of December, Doron Lamb and Marquis Teague were consistently taking more shots than Davis. In Kentucky's one loss (to Indiana), Lamb and Teague combined for 25 attempts. Davis had 4. Who are Doron Lamb and Marquis Teague? Exactly.

Now, of course, the sum total of this is Anthony Davis is living up to his billing as the #1 overall pick. Meaning, he's going to be the #1 overall pick. Meaning....between our luck and the fact any first rounder we have will be from someone else....there's basically no way we'll actually be drafting him. He's on the list, but I'm listing him as #0. Should we if we can? Absolutely. Can we? No chance.

You guys are going to be sick of hearing this name by the end of the season. Like, seriously. You have no idea. I will be name dropping Jeremy Lamb every chance I get.

I really can't fully describe how perfect Lamb would be for this team. He fits in every way imaginable. He's athletic. He's smart. He can play equally well on or off the ball. He can shoot from anywhere. He gets to the rim. He gets to the foul line. He gets into the passing lanes. He handles the ball. He moves the ball. He's got ideal shooting guard size. He's got that Reggie Miller/Rip Hamilton natural instinct for finding the open spots on the floor. Next to Ricky Rubio? This guy's a star.

Pretty much all of the 'legacy' point guards in the NBA have had some sort of kickout shooter to run with. John Stockton had Jeff Hornacek. Mark Jackson of course had Reggie Miller. Gary Payton had Hersey Hawkins (a favorite of mine based on his name alone) and Dale Ellis. Jason Kidd had Jim Jackson, Jamal Mashburn, Penny Hardaway, Richard Jefferson, Kerry Kittles, now he has Dirk. Steve Nash had Dirk as well, and Michael Finley, then basically the entire Phoenix roster. Kidd and Nash even had each other for a while. When you have a point guard like Rubio, you need to find a guy for him to sling the ball to. Jeremy Lamb can definitely be that guy.

Usually when I do these things, I try to highlight a weakness or two, but I'm honestly struggling to find something to dislike about Lamb. He's at least solid in every area, physically, mentally and productively.

Another of S-n-P's spot-on assessments for this team was needing a low-usage center who could rebound and block the hell out of the ball. For that, I'd say you want John Henson. This draft is a great opportunity to solve the Wolves' problems on the wings, but if we have a pick and Henson is on the board, the chance to solve the problem at center here would be too good to pass up.

This guy is a young Marcus Camby. A long, wirey, athletic big man with a hardcore ability to rebound and reject, and surprising versatility everywhere else. As a junior, Henson has maintained his sophomore marks of 10 rebounds and 3 blocks a game, while increasing his scoring efficiency and output, and assists, while cutting down on turnovers and fouls. He basically has nothing run for him, but is so good on the offensive glass and in transition that he's posted double figure scoring in all but two games this year so far. He started the season with a 12 point, 7 rebound, 9 block domination of Mich St, the proceeded to post three consecutive double doubles (remember that he's sharing paint space with another really good big man in Tyler Zeller). In UNC's one point loss to Kentucky, Henson gave up nothing to Anthony Davis (10-8-3 to Davis' 7-9-2).

Henson is somewhat of a stick figure. And he has critical issues at the free throw line. But if all you're asking him to do is anchor the defense and throw down Rubioops, then I'll gladly live with that.

The numbers will tell you Rivers is Lamb's equal, if not better, but there are a few differences between them that put them in slightly different tiers in my mind.

One is size. Lamb has a frame with length in particular that Rivers does not. It might seem like a small thing, but it can make a huge difference at the NBA level.

The second is that Lamb has shown the ability to find ways to contribute when his shot isn't falling. Rivers hasn't shown that yet. Part of it certainly is Lamb is a sophomore, but the point stands. With his build and singlemindedness as a scorer, I have worries that Rivers will be rather Foye/McCants-like those games where he isn't scoring in bunches.

The third is that Rivers is much more ball-dominant. The singular skill that will potentially make Rivers and NBA star is that no one can stay in front of him on the ball. He's that Monta Ellis loose cannon type. Standing alone, that's a remarkable skill to have in your favor. But having watched the Wolves play enough games to start drawing some conclusions, I'm becoming more and more convinced that the scoring/slashing type of guard is not the ideal player to put next to Rubio. Taking the ball out of Ricky's hands doesn't seem like the best thing to do, if a better option is on the table.

But again, Rivers has an ability to attack the basket that you don't often see. He'd be a big improvement over anything the Wolves have right now, so if he's the guy on the board when that hypothetical pick comes up, then take him.

Ok, now before everyone riots, let's take a step back and reassess Barnes. Is he the super athlete he was hyped as coming in as a freshman? No. But it's increasingly looking like that isn't going to matter.

Barnes has obviously put in work, because he fixed the flaw everyone got on him for last season: scoring efficiency. Last year he was dismal. This year, he's been elite. His FG% is up 6% (42 to 48) and his 3pt% is up almost 10%, to 44%. He's also displaying a fairly effective post game (which is why I rank him ever so slightly ahead of option 5b) He's cut down his three point attempts in favor of getting to the line more often, and has shown much more defensive awareness.

He's not the next Kobe, and that initial expectation will always dismiss him in some people's minds. But with his size and improved shooting touch, he could easily be a Luol Deng/Paul Pierce, and I'd gladly take that on this team.

Just to address it up front, there are two small reasons why I'd take Barnes over Gilchrist. One is Barnes has more of a post game. The other is Barnes can play both the 2 and 3. Gilchrist is strictly a 3.

That said, the rest is basically a wash between the two. Ironically, I think Gilchrist will be hurt by the same thing that hurt Barnes: expectations. MKG is not an elite athlete. He's not a Gerald Wallace. He's not Rudy Gay. Nor is he super-versatile, like a Shawn Marion or Tayshaun Prince.

What Kidd-Gilchrist brings to the table is thorough basketball competency and a high floor. He shoots well, moves the ball well, and rebounds at a very high level. While his average athleticism limits his ceiling, he also has basically no chance of failing as a pro....he's guaranteed to be decent at worst. With his size and rebounding, I'd say we're looking at a Josh Howard type. Not bad at all.

Bradley Beal - SG Florida: The mocks like Beal a lot more (and Rivers a lot less) than I do. I guess my biggest concern is his size. He's legitimately small to be an NBA shooting guard. If you're going to stand 6'3" as a 2 guard in the NBA, you've got to be able to attack the hoop in a ridiculous way. Like a Dwyane Wade/Eric Gordon kind of way. I just don't see that working in Beal's favor. That said, he came into college as the top ranked shooting guard recruit, and hasn't done anything to disappoint.

Andre Drummond - C UConn: This dude is the opposite of Beal on the size scale....legitimately huge. 7', 250 lbs, and his wingspan has to be in the 7'3"-7'4" range. He's very raw...the difference in skill level between him and Anthony Davis is night and day. As a prospect, he's a top 5 pick, but for the Wolves, I don't know if I could recommend him. It'll be a few years before he's good, and a lot of his skill overlaps Love. He wouldn't solve the defensive or athletic problems in the frontcourt like Henson would. And he also has a very very troubling complex about the free throw line. Like, to a point where he's begun actively avoiding situations that might send him there. But he's clearly talented. And like they say, you can't teach size.

Quincy Miller - SF Baylor: Miller is an interesting prospect. He has tremendous size and reach, a sweet shooting stroke, and super high skill level. He also has torn an ACL. In terms of frame and potential, I'd much rather draft him than Gilchrist or Barnes. He's scoring on some crazy percentages for a perimeter player, and he's much smoother and more athletic than either of them. But that injury history in concerning, and he's inconsistent. There are nights when he looks like Tracy McGrady before the injuries, and nights when he looks like Tracy McGrady after the injuries, with no real rhyme or reason as to why.