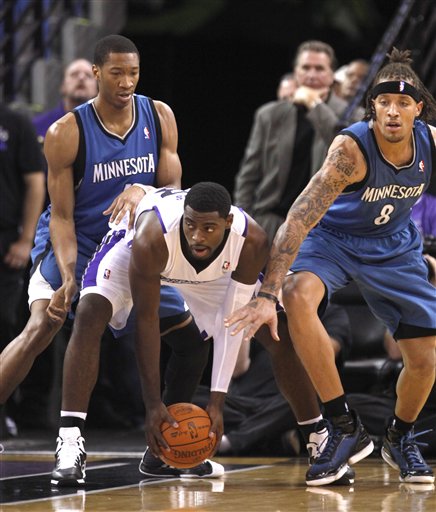 Those are the combined numbers of your starting wing tandem. Michael Beasley and Wes Johnson combined. By himself, Kevin Love has made more 2s, more 3s, more free throws, and collected more rebounds. Beasley has 81 total points. Love has 90.....total rebounds. Love also has 53 free throw attempts. Beasley has 17. Wes doesn't have a single one. In fact, Love has more made free throws than Wes has shot attempts.

The wing situation isn't quite as dire as it appears right now. For one, Martell Webster and Malcolm Lee are both out. Webster in particular should be able to be at least an average-production wing player next to Rubio, and Lee has that potential. Second, JJ Barea is out as well. If recent history has taught us anything, it's that the two point guard set can work in the NBA. Kahn just got once of the specific point guards wrong. The Pups can also throw Anthony Tolliver in at small forward if need be (I cannot stress enough how invaluable an Anthony Tolliver is. The guy just plays winning basketball)

All that said, this squad is still in desperate need of quality wing players. The fortunate part is...despite appearances....they aren't hard to find. Ok, sure, if you're looking for a Kobe, they're hard to find. There aren't that many Kobes. But there's all kinds of Wesley Matthews and Marcus Thorntons and Arron Afflolos. It's just about knowing what to look for and when to look for it.

As evidenced by their suspension of DeMarcus Cousins and subsequent firing of Paul Westphal, this is a team in chaos. Garcia is already on the trade block, and has been for some time. Thornton could be as well depending on how Jimmer Fredette and John Salmons work out. Garcia is older, more diverse, and a better defender. Thornton is a much better shooter.

He's started off the year ice cold, but for the balance of his career, the guy has been lights out from the floor (47% FG, 45% from three in his first three seasons). The shooting woes have cost him his starting spot...possibly permanently....which means New Jersey will pick up the phones and won't fight to hard to keep him.

Ok, this does kind of seem like a pipe dream, but let's just keep sleeping and dream for a moment. I'm going to assume I don't really need to sell anybody on Batum. The guy is a literal jack-of-all-trades, a good defender (when motivated) and supreme athlete.

But while he's a valuable and productive player, he may also find himself the victim of economics. The Blazers already have over $21 million invested in Gerald Wallace, Wes Matthews, and Jamal Crawford. When Batum starts talking about the payday he deserves at the end of the year, will Portland be willing to add to their already farily maxed out rotation? It's definitely worth keeping an eye on.

I still have strong memories of Courtney Lee going straight at Kobe Bryant in the 2009 Finals. The guy is a tough player on both ends of the court, with good size and shooting touch. He's also in a battle for burn with Chase Budinger, Terrence Williams, Chandler Parsons, and Goran Dragic.

Redick will be hard to pry away, considering he's one of the few valuable potential-post-Dwight Howard pieces the team has, but might as well try. The guy's smart, versatile, and can really shoot. Earl Clark has yet to cash in on his tremendous potential, but has shown flashes and would be a very low risk. He was one of college's most complete players at Louisville, and was particularly strong at pick-and-roll play.

I was a big fan of Walker's at KState and I still am. There's a lot of Latrell Sprewell in him. Injuries have robbed him of some of his explosiveness, but he retains his ball IQ, versatile skillset, and take-no-prisoners attitude.

Ok yes, he's got a bit of an attitude and lost his starting job to a blue collar guy. He's been steadily less productive season after season, not more. But he's undeniably talented, and available (one would assume) as a bargain price with no long term risk attached. A Rubio/Mayo backcourt would have serious potential, and putting Mayo next to a point guard who doesn't have Damon Stoudamire dillusions could very well help him recover his scoring touch.

The first one can do a lot of things, although you'll end up with a lot of Brewer Moments along the way (which, depending on your drinking habits, may or may not be a bad thing). The second and third can theoretically shoot. The tools are there. Might just be missing the opportunity. Belinelli and Henry are both getting crunched on playing time by Eric Gordon now.

Yeah. I went there.

First of all, let me point out the sheer hilarity factor of a Rubio/Brewer backcourt. Quite possibly the most unorthodox, herky-jerky tandem in league history. That said, Corey in a pick-and-roll system that gets him basket cuts and alley oops could really be something. Worked well enough for Ronnie Brewer in Utah.

And Fernandez....well, aside from being one of Rubio's best friends, can handle the ball and shoot the three (ironic, considering he can barely shoot the 2) and is a sky-high athlete to boot. Granted, we'll have to get over the three point goggles....

Alright, so this option is a lot more expensive than the others. And a lot riskier. And a lot more of a commitment. But Ellis is also the most proven and dynamic of the bunch: a true, go-to scorer who can shoot with unlimited range and is impossible to stay in front of off the dribble. If you're confident an undersized backcourt will work and can get past the $11-12 million price tag and somewhat frequent "loose cannon" decisions on the court, it's perfect.

I've made it clear before, but I'm a big believer in the idea that Ray Allen is what makes Rajon Rondo work. I'm also a big believer in the positives of a true veteran on a young roster; not just a guy who's been in the league a long time, but a guy who's been a star in it and is willing to lead others to that same stardom. Ray Allen is an ageless wonder. Like Jason Kidd or Reggie Miller. He can shoot the living daylights out of the basketball and that's a skill that never changes. I realize that it'd cost $10 million and would likely be a one year rental. But hell, I can't think of a better option to put between Rubio and Love to hold the floor until Jeremy Lamb arrives.

The dude's averaging 19 points on 51% shooting (41% from three). He's 6'5" with 747 arms. He gets to the free throw line, rebounds and plays the passing lanes, and is fearless about taking the big shots. Get a draft pick. Gt Jeremy Lamb.