A quick look at what the Harden trade means for Our Beloved Puppies.

Share All sharing options for: Houston Finally Lands A Max

Dork Elvis has been trying for a very long time. Churning and chugging and mashing and sputting, he finally found a use for all of the mid-to-late first round picks, expiring deals, and rented salary he has been hoarding over the years.

Houston, the Beard has landed.

At the end of last season, Our Beloved Puppies found themselves looking upwards at the following teams:

If we use Ricky's knee explosion as a tracking point (21-19; just above .500), the Wolves would have found themselves looking up at the Jazz with their good buddies, the Rockets.

In other words, the direct competition for one of this year's final playoff spots just upgraded their roster and that means we should take a quick look-see to make sense of what that means for the hometown 15.

First of all, this year's Rockets team is a shell of last year's barely-.500 squad (to include all players in a Rockets uniform during the season). Gone are Kevin Martin, Luis Scola, Kyle Lowry, Marcus Camby, Goran Dragic, Samuel Dalembert, Jordan Hill, Chase Budinger, Courtney Lee, Terrance Williams, and the cast of Nashville.

Congratulations to Chandler Parsons. You have won immunity and the island is yours.

On the Wolves side of the ledger, the Phoenix Suns have happily agreed to take hundreds of minutes of terrible production off of the Wolves' books. Sadly, they were unable to acquire hometown hero and bad-minute enthusiast Derrick Williams. There's always a next year.

Unfortunately, the Wolves have some temporary (honorary?) outs, as well. Kevin Love's wink-wink knuckle pushup kerfuffle (WWKPK) and a broken unicorn leg are going to cost the Wolves a fair amount of above average production in their starting lineup at the beginning of the season. 2/5ths of the team's starting lineup, and about 75 mpg of awesomeness is nothing to sneeze at, even with the addition of solid players like Dante Cunningham, Chase Budinger, AK-47, and Roy. Ultimately, not having Rubio and Love means handing over lots of unnecessary minutes to Derrick Williams and all of those awesome point guards that David Kahn has been stockpiling for the past few seasons. Luke Ridnour has seen better days, JJ Barea is a mini-2 guard, Shved is Shved, and...well, a case could be made that Will Conroy is probably their best true backup point guard on the roster.

Before we continue, let's just take a quick moment to talk about how this trade is something of a colossal FUBAR by the OKC Thunder. Like really-and-completely-they-got-fleeced-and-we-all-need-to-rethink-the-universe-and-Sam-Presti's-place-in-it bad. Now, as a long-suffering fan of a team whose destiny has largely been shaped by an owner who is...um...well, somewhat involved on money decisions, I do think that maybe the championship-contending Thunder had their core blown up by their kind of evil owner. This is certainly a possibility. However.. 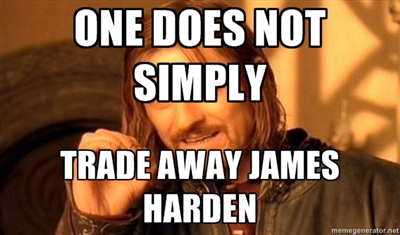 Professional basketball roster construction is not rocket science. Rule #1 is simple: If you get an awesome player, never ever let him go. There simply aren't that many enormous humans with stunning athleticism who can put the little orange ball through the hoop.

Back to the Wolves/Rockets. Here are the basic guts of the new Rockets roster:

They're pretty damn thin but a starting lineup of Lin, Harden, Parsons, Patterson, and Asik isn't the worst thing in the world. It certainly is something that will have a chance on most nights against teams in its immediate peer group, like the Wolves.

If Roy and Kirilenko can play decent minutes without getting injured, and if Shved can be a competent backup, do the Wolves have enough fire power to get past the Rockets in the Western Conference talent pool?

Before last night, that was a simple question and answer: Pektropolis by a country mile. Now, however, the Rockets have a legit starting backcourt, a solid defensive center, and a nice young wing player (Parsons) that should be able to keep them in a lot of early season games. Will Harden respond well to becoming The Guy? Who knows? What I'm fairly certain of is that Oklahoma City just handed one of the best players in the league to a team the Wolves were comparable to last season. That's never a good thing, especially with injuries to Love and Rubio and a long season where a lot of crazy things can happen.

Overall, when Love and Rubio get back into the mix (hopefully in mid-December), the Wolves will be miles ahead of Houston in the talent competition. In all honesty, a fully-operational Wolves squad is one of the best 3-5 teams in the West. However, getting to that point without drowning in the standings is going to be story lines A, B, C, all the way through Z for this team in November and early December. They walk a fine line without Love and Rubio. Roy and AK could have their bodies disintegrate at any moment and then we will be left rooting for the Caged Lion as the focal point of the offense. Also, the guard play on this squad without Rubio is thin, at best.

As it was, this season was already shaping up to be a challenge. The Clips are better, the Mavs improved, Utah upgraded, the Lakers are some sort of 2K13 easter egg roster, and Denver...yeah, Iggy. The last thing a promising but injured Wolves team needed was for OKC to hand over a power shroom to a team that had been downgraded to sub-Wolves status. This is something akin to D-Wade being shipped to the Kings. It just isn't helpful, especially during the first month and a half of the season.

Here's hoping that Roy and AK can stay healthy, that Shved is competent, and that the Wolves will be presented with a Pek-sized max contract problem of their own come next off-season.

Let the reign of Pektropolis begin.