It all comes full circle for John Lasseter. Again.

Disney's acquisition of LucasFilm Ltd. is a second lap around the circle for the guy who created Toy Story

Share All sharing options for: It all comes full circle for John Lasseter. Again.

I'm a total Star Wars geek, and a lover of Pixar, Disney, and Apple, so the last few days have kind of turned my world upside-down in excitement.

As many of you have probably heard by now, they are connected. Lasseter is now the Chief Creative Officer of Walt Disney Corp., which is a fancy way of saying he has creative control over everything....every film, every TV show, every stage musical, every theme park, every store....everything. And George Lucas, of course, is the creator of the world's first true blockbuster film and still one of the most popular trilogies of all time, Star Wars, which he brought into reality through the creation of LucasFilm Limited. Today, Disney announced it has bought LucasFilm.

When George Lucas set out to make the Star Wars films, he realized he'd need to invent a new way of making movies, which led him to found this little studio called Industrial Light and Magic. Along with Star Wars, ILM's portfolio now includes (among others) E.T., The Abyss, Star Trek, Terminator, Jurassic Park, 101 Dalmations, Men in Black, Titanic, Deep Blue, The Mummy, Planet of the Apes, Pearl Harbor, Mission Impossible, Harry Potter, Transformers, Pirates of the Caribbean, Iron Man, Avatar, and The Avengers. ILM dominates the special effects industry, completely and shamelessly.

Disney gets them too.

Disney will also get several of Lucas' other divisions: LucasArts, LucasAnimation, and Skywalker Sound. But there are two divisions Disney won't get in this deal, because they've already been sold off: THX and....

And while Pixar was still owned by Lucas, it hired John Lasseter. And then Pixar was bought by Disney.

A brief history: John Lasseter went to college at Cal Arts, Disney's own internal animation school. His classmates included Tim Burton and Brad Bird, and his teachers were Disney's legendary 'Nine Old Men', the nine animators who Walt directed to effectively launch the feature film animation industry with Snow White. John was hired by Disney after graduation, and worked on The Fox and the Hound. He was then given permission to experiment with computer cel animation (not 3d, like Toy Story, but 2d images drawn in a computer rather than on film negatives) by doing a story treatment for the Brave Little Toaster, but the studio didn't understand the point of using a computer for animation work, and laid him off.

He then met Pixar division head and technical director Ed Catmull at a conference aboard the Queen Mary. He was hired by Pixar, because although their work was primarily in software imaging (think super high end xrays, etc), they had a dream of making movies with the software and needed an animator.

Now here's where the John's first run around the circle begins. Lucas loved the Pixar division, which created all sorts of gadgets for him (most notable was the EditDroid, the world's first non-linear film editing system) but he couldn't support their dream of making a movie. Literally. Because he ran an independent movie house, he had to pay out of pocket for any film LucasFilm made, and at the time he simply didn't have $50 million in spare change sitting around.

So he let Catmull spin off the division, which was then bought by....get this....Steve Jobs. At the time, Jobs was falling out with Apple (he would soon be kicked out officially) So he was basically a kid with a ton of money and nothing to do with it.

As Pixar continued creating and manufacturing hardware, Lasseter...with the approval of Catmull and Jobs...quietly made a series of short film, which they would then show off at the annual tech conference, Siggraph. It was sort of a way to show off what the company was capable of. It gave the product some shine. And as that went on, Jobs became more and more intrigued by the idea of seriously making a movie.

Jobs always viewed himself as a guy who was at the intersection of technology and the humanities...that place where talented people make beautiful products that make everyone's life better. The idea of making the world's first computer animated film spoke to him. But even he didn't have the money to fully finance a film, especially one using technology that had never been used for film before. Pixar was going to need an outside distributing partner. Disney seemed like the perfect choice.

Meanwhile, Disney was trying to get Lasseter to return and direct a feature for them. The studio was in the middle of an incredible run of films (Little Mermaid, Beauty and the Beast, and Aladdin, with the Lion King and Pocahontas in the planning stages). But when Disney executives Peter Schneider and Thomas Schumacher approached him, Lasseter turned them down and instead pitched the idea that Pixar could make a Christmas special for them, based on an early treatment of what became Toy Story. Schneider loved the idea so much he simply said Disney would finance the company to make Toy Story a full length feature.

And, well, that was that, right?

Long story short, Toy Story proved to be as big a revolution in film as Snow White, and Pixar would go on to create their own incredible run of films: A Bug's Life, Toy Story 2, Monsters Inc., Finding Nemo, and The Incredibles. By that point, Pixar dominated as much of the animation industry as Disney, if not more. When Disney Chairman Michael Eisner was ousted by Walt's nephew Roy, and replaced by Bob Iger, the company decided to rejuvinate it's animation division by simply outright buying Pixar.

Jobs was made the largest shareholder, Catmull was made President of the animation divisions, and Lasseter was given creative control of the whole thing. 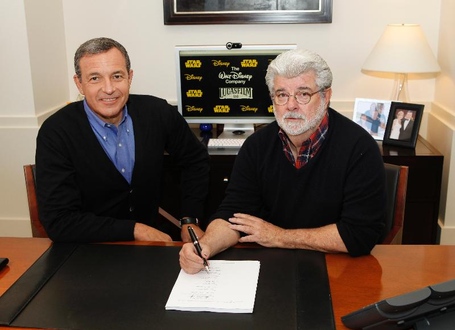 To Bob Iger. All the awards ever.

And so you can see now how Disney acquiring LucasFilm is serendipity all over again for Lasseter. He started working for Disney and ended up running it. He started over working for LucasFilm and is now running that too.

Very few people have Lasseter's combination of creativity, vision, drive, and perfectionism. He is to the entertainment industry what Steve Jobs was to the tech industry (minus the temper) In fact, my boss used to work for Jobs at Apple, and said there are only two guys Jobs worked closely with that he never yelled at: his head of design at Apple, Jony Ive, and John Lasseter. They were just that good. If anyone is capable of carrying on Lucas' legacy, it's Lasseter, just as he's carried on Walt Disney's.

So here's to another new era in film. Which hopefully will include Star Wars as directed by Joss Whedon.

Wouldn't that be sweet.