Share All sharing options for: Game #6 On The Road To 81-1: Bullish 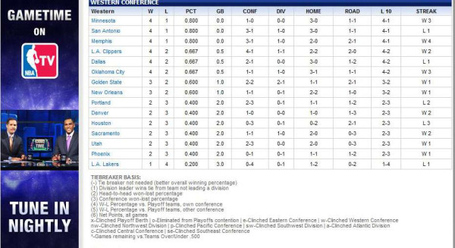 While things will no doubt change... right now...

The Wolves are 4-1, have a great coach, are successfully running the Princeton offense, and have a deep team.

The Lakers are 1-4, fired their coach, bottomed out trying unsuccessfully to run the Princeton offense, and have zero depth.

We've always been the anti-Lakers. But this year ... that's good!!

Don't worry about the soft schedule, getting teams on the tail end of their back-to-back, not getting Indy with Granger, none of that. These things happen to each and every team in the league, and for the better part of the last decade, they have happened to the Minnesota Timberwolves...who responded by losing. This year, so far so good. Fingers crossed.

Today the Wolves are headed to Chicago on their own tail end of a back-to-back. It could get rough. However, the last time they played B2B, they completed a near-historic comeback victory.

The Bulls are without Derrick Rose, Carlos Boozer is being a Dookie, and Luol Deng has a sprained finger.

Chicago enters the game with a 3-2 record and they are winning with their defense, which has the 2nd best Drtg in the league. They force a lot of turnovers (16.7%), clean up the defensive glass (75.8%), and they hold teams to an ok eFG (.469). All of this is a long way to say they are coached by Thibs and they play Joakim Noah, Luol Deng, and Taj Gibson.

What I will be looking for in tonight's game:

Well, that about does it. Our blogging buddies for the day are over at Blog a Bull.
Until later and go Wolves!