Minnesota adds another to the win column, but loses another from the active list

Share All sharing options for: Another win, another loss (a Min/Dal gamewrap)

There are 82 games in an NBA season.

Unfortunately for the Wolves, there are not 82 players on the roster.

Yeah. You would have thought karma would have had its fill when Knuckles had his accident (...'accident'...), but nope. Whatever higher power that passes for a basektball god decided the Wolves needed to be less a pro sports team and more a mobile medical field unit. Barea goes toe-to-toe with the scorers table (literally), Budinger gets attacked by Marco Belinelli and a Tangela, Roy has that thing called life catch up to him, and then....tonight, in the third quarter....Nikola Pekovic somehow got more ups than Air Canadallas and thus landed on Vinsanity when he came back down, and well.... 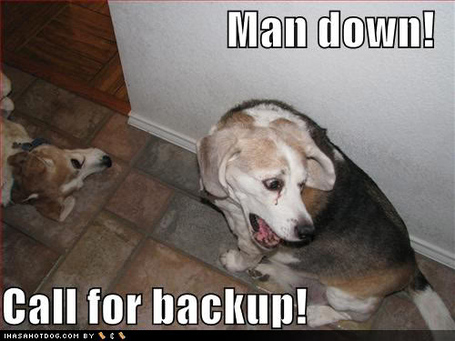 At this rate, the Timberwolves will be the seemingly-indestructable Dante Cunningham and 11 D-League randoms by New Years.

You really have to credit Rick Adelman and his coaching staff for the job they've done early this year. Granted he's lost key players before (Chris Webber, Tracy McGrady, Yao Ming), but this is just as strategically taxing as anything he's ever faced, and probably more psychologically so.

Tonight the Wolves won by maximizing their creativity and the versatility of the roster. Andrei Kirilenko has played every position in the NBA, and tonight he did it again. Dante Cunningham came off the bench with another gritty, in-your-face performance, and Alexey Shved did more of his late-game dazzling. The Wolves and Mavs seemed determined to out-Nellie each other (I'm pretty sure Vince even played a couple minutes at the 5) and that....for a change...is a battle the Wolves will win 9 times out of 10. 'Sota brought OJ Mayo back down to earth and held the rest of Dallas' roster to near-30% shooting.

Early buzz says Pekovic has a sprain....nothing broken, nothing torn.....so that's good at least. Sort of. I guess. Or he could just not be hurt at all, because life already hates us and stole 1/2 our roster.

So. Will Conroy. How do you feel about playing center?