The Knicks currently have the 5th best record in the league, and according to Basketball-Reference are the 6th best team overall after accounting for strength of schedule. They are a good team. However, looking over their numbers, they are a good team in a very unique way, and I suspect they may be more vulnerable than their efficiency differentials imply.

There are a couple of areas where the Knicks do not look like a top team in the league. They don’t rebound well, they don’t move the ball, and they are at best mediocre at getting to the line. I’m not saying the Knicks can’t be good in spite of these deficiencies, but they are legitimate red flags.

Rebounding: The Knicks have the 4th worst rebound rate in the league at 47.7. Good teams typically do not have trouble rebounding the ball. This is obvious seeing the other teams surrounding New York in rebound rate like Phoenix, Toronto, Boston, Dallas, and Charlotte.

Ball-movement: The Knicks do not move the ball much. I am hesitant to point to this as a negative since it has been working, however it is a feature that distinguishes them from other successful teams. Only 54% of the Knicks’ makes have been assisted this season. That means they take the 3rd highest rate of unassisted shots in the league. The Knicks trail only the Kings and Blazers and are just ahead of the Cavs and the Bobcats in this regard. Obviously not "contender company."

The Knicks’ minimal ball movement isn’t all bad however. The flip side of limiting passes is that you don’t take as much risk. New York has this cautious approach to thank for their league leading turnover rate of 10.5%. This is one of the unsung advantages of having a ballhog like Melo run your offense. You don’t turn the ball over much when you only throw it at the rim. Both the Knicks’ low assist rate and low turnover rate can be explained by their very top-heavy distribution of possessions. At 34.2%, Carmelo is the most ball-dominant player in the NBA. It isn’t just Melo either. In addition to Melo three other players: Rasheed Wallace, Raymond Felton, and Chris Copeland all have a usage rate of over 25%. For comparison, Kevin Love is the only Wolves player to eclipse 25% usage. 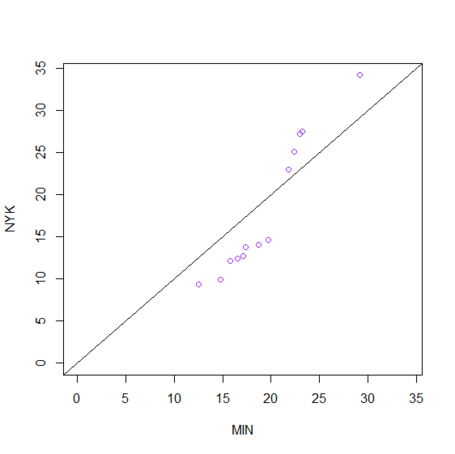 [qq-plot comparing usage distributions for two teams. This plots the top MIN usage against the top NYK, the the 2nd MIN player against the 2nd NYK player…. and finally the N’th MIN player with the N’th NYK player.]

Look at this comparison of Minnesota’s and New York’s usage distributions. These teams have two very different approaches to the game. New York allows one or two players in a given rotation to completely dominate every possession, while Minnesota tries to get as many players as possible to contribute offensively. Good teams tend to look more like Minnesota in this regard, but this isn’t always the case.

Free-throw rate: The Knicks aren’t necessarily terrible in this regard, but at 21st in the league New York, Atlanta, and San Antonio are the only good teams that are below average in free-throw rate. Given that the Wolves are one of the best in the league at not helping their opponents get to the line, this should be an area for us to take advantage. Let's hope the refs oblige us.

It is fun to poke holes in an otherwise extremely successful team’s stats, but that doesn’t really help explain why they might not be as good as people think. Thus far, the Knicks have been winning in spite of the above problems. If anything, highlighting their weaknesses just shows room for improvement. If I really want to argue that a team isn’t as good as their record or efficiency differential implies, I need to cast doubt on what they do well. In the case of New York, this is easy to assess because their success is largely explained by one thing….

The Knicks are way above the rest of the league in terms three-point production. They are more 3-pnt dependent than any other team with 35.4% of their shots coming from beyond the arc, compared to the league average of 24.2%. Despite throwing up a ton of threes, the Knicks have managed to maintain the 3rd best 3-point efficiency in the league. Nearly 30 (29.5) attempts per game at a 60.7% return is a ridiculously efficient offensive weapon, and it almost single-handedly accounts for New York’s success this season. After understanding this, the big question for New York then becomes… "is it sustainable?" I am going to wager "no".

The best 3-pnt eFG from last season was 58.9%. The best in 2010/11 was 59.5%. The best in 2009/10 was 61.9%. New York’s current efficiency is in the reasonable range for a top 3-point team, but they are doing it without the same level of selectivity. Compared to these other sharp-shooting teams, the Knicks are taking at least 30% more attempts from range per game and their slow pace makes that number an underestimate of their 3-pnt reliance. Obviously, I can’t observe all of the Knicks' three-point attempts and assess how good the looks are, but for now I feel safe assuming that the more shots attempts you take, the less open the average attempt. Maybe I am wrong, but New York would have to be doing something very special schematically to get that many more wide-open looks than every other team in the league. (especially if they are doing it without registering more assists...)

Three-point shooting is extremely noisy. When trying to explain surprisingly good (or bad) teams/players, three point offense and defense should be the first place to look. In the case of New York, the numbers scream "they probably aren’t as good as you think". The Knicks have hit a total of 305 shots from range this season. Assuming all of those shots were taken at the respective players’ career shooting percentage, they would have only hit 272. That is 33 fewer makes, for a total of 99 fewer points, 3.8 fewer points per game, or an offensive efficiency swing of 4.1. Meanwhile, the Wolves have undershot their expected three-point shooting (based on career numbers) by 15 makes (139 as opposed to an expected 154). For a total of 45 lost points, 1.9 points per game, or 2 points in offensive efficiency. If we attribute all of the Knicks’ and Wolves’ divergence from career numbers as random variance, it could explain almost the entire gap (6.27 differential) between the Wolves’ and the Knicks’ seasons thus far as noise. Let’s hope the individual players’ entire careers carry better information about their next collective 30 shots than the teams’ most recent 600 shots do.

I still think the Knicks are a good team, just not as good as their success thus far in 2012. Unfortunately without Kevin Love, New York’s relative vulnerability may not matter. I was hoping to tell a story about us having at least even odds of walking out of the Garden as the hot team in the NBA. However, without Love we are definitely the underdog even assuming I am correct about the thin ice New York's success is currently sitting on.

The current narrative is "upstart Wolves squad is heavy underdog against surprising contender New York Knicks." Regardless of what happens tonight, I expect that narrative will have changed by our next meeting in February.