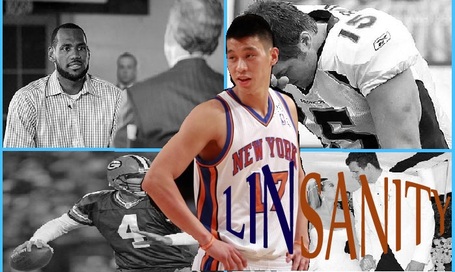 In the 24-hour sports news cycle, Jeremy Lin is providing the ultimate feel-good story...for the next few days or so.

It's a story that sounds straight out of Hollywood.

Nice kid with a love of basketball. No athletic scholarship offers out of high school. Attended Harvard University. Undrafted out of college. Sent to the D-League. A week away from likely getting cut from by his third NBA team.

Finally, when injury problems arise for the Knicks, he gets an opportunity against the New Jersey Nets. He plays 35 minutes, scores 25 points and dishes out 7 assists in a victory. In the following days, he is awarded his first NBA start against the Utah Jazz and goes for 28 points and 8 assists. Next, he matches up against John Wall and has his first career double-double with 23 and 10.

Last night, he takes on Kobe Bryant and the Los Angeles Lakers in front of a packed Madison Square Garden, where he explodes for 38 points, 7 assists, 4 rebounds and 2 steals.

It's almost too good of a story to believe... 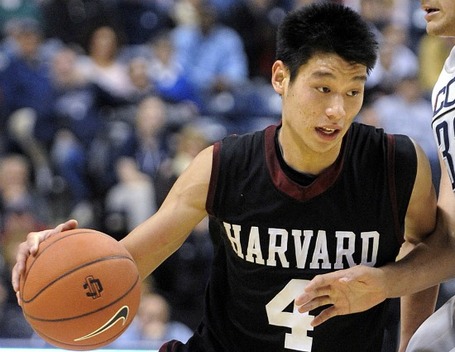 All this one needs now is Sandra Bullock and a cheesy screenplay. Of course, knowing Hollywood, they'd probably make Lin's character white like they did with the main character in "21". Nevertheless, the national media, who has never been shy from turning fake weddings and a mediocre quarterback's devotion to God into months worth of headlines, has seized upon the hype and now true Linsanity has descended upon the sports world.

The problem with the national media is that when they are blinded by a shiny new toy, they never take the time to investigate the truth. Brett Favre is just an "aw shucks" quarterback, until he's found sending photos of his 4th and inches to a New York Jets cheerleader. Mark McGwire and Sammy Sosa are home run champs, until it is discovered that even their bats were pumped full of steroids.

Jeremy Lin has secrets, and since no one else seems up to doing it, I need to take it upon myself to expose the truth.

Exhibit A: Did Jeremy Lin really graduate from Harvard?

Jeremy Lin supposedly graduated from Harvard University in 2010 with a degree in economics and a 3.1 GPA. Jeremy Lin is the first NBA player from Harvard since the 1950s and the first from an Ivy League school to suit up since the '02-'03 season (Matt Maloney, Penn; and Chris Dudley, Yale). There are some problems with Lin's tenure at Harvard, however.

First of all, take a look at this course list that I was able to obtain from Harvard archives: 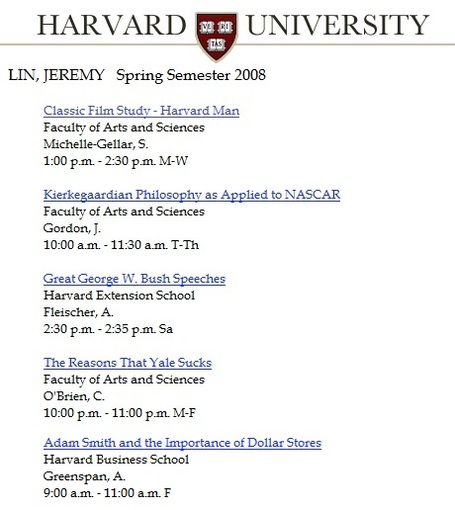 A bit underwhelming if you ask me. There are some athletes who have coasted through school with special treatment from administrators and faculty. It appears that Lin may have been one of those athletes.

My sources claim that, despite the easy course list, Lin frequently received tutoring help from a student named Elle Woods and that Woods frequently took tests for Lin. Harvard business professor Josanfernee Smith remarked, "[Lin] would often have trouble understanding the matearial (sic) and I am not sure how he could have gotten through without some outside help."

While Lin does have a diploma, I could not verify the legitimacy of this document and could not reach Lin for comment. The conclusion seems pretty clear either way though: Jeremy Lin is an academic fraud.

Exhibit B: Is That Really Jeremy Lin?

Through important and trail-blazing documentaries such as Mission Impossible and Scooby Doo, the troubling problem of Impersonations has been exposed to the world. It starts off simple enough. You want to commit a crime of some sort, but you do not want to use your own face. So, you decide to make an exact replica mask to wear and commit said crime, which you would've gotten away with if it weren't for those meddling kids.

Is Jeremy Lin actually an imposter in a replica mask? If you look at the photo below, you can see that it is not a difficult task to pull off. 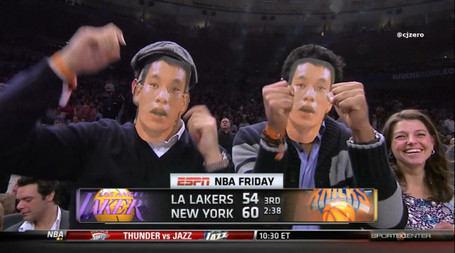 If those two gentlemen can so easily pull it off, what is to stop someone else from doing the same?

One of my theories is that LeBron James secretly wanted to play in New York, but would've felt bad saying no to his friends Dwyane Wade and Chris Bosh. Therefore, in order to play for both teams, he puts on a mask, flies to New York and plays as Jeremy Lin. This theory just makes too much sense and there are too many coincidences to dismiss it outright.

In the movie 'Space Jam', the evil Mister Swackhammer and his minions, the "Nerdlucks", come to earth and steal the basketball talent of Shawn Bradley, Muggsy Bogues and other NBA stars. They called the team the "Monstars" and they used that talent to defeat the Looney Tunes, until Michael Jordan showed up. 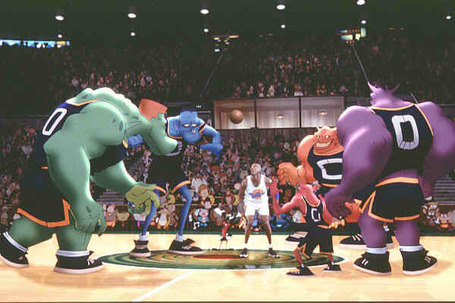 Ever since Jeremy Lin began his hot streak in New York, Ricky Rubio has played noticeably worse. He only had one assist against Memphis and has turned the ball over 4 times in each of the last four games. Is it possible that Jeremy Lin is really an extra-terrestrial monster who took Ricky Rubio's talent and is using it for himself? I think the possibility is one that cannot be ignored.

Will Rubio be able to take back that power in tonight's game? Can Kevin Love play the role of MIchael Jordan in this live version of the movie? Is Wesley the Bill Murray of this scenario?

There are so many questions. 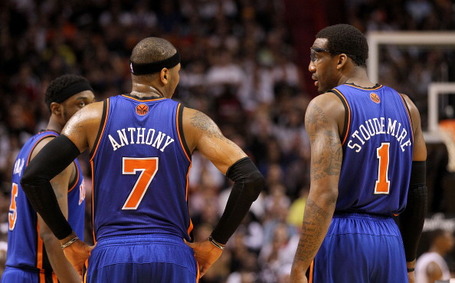 Despite signing Carmelo Anthony and Amar'e Stoudemire to expensive deals, it took a player who will make less than one million dollars this season to rejuvenate basketball in New York. Both of them should just retire now, move to foreign countries and spare themselves the embarrassment. 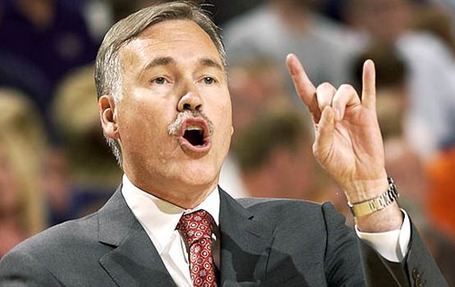 Mike D'Antoni's job may have been saved by a player who, according to sources in the Knicks organization, would have been out of one had his breakout performance against New Jersey never happened. It could also have been saved by the plate of homemade cookies that D'Antoni's mother brings to James Dolan after every game. 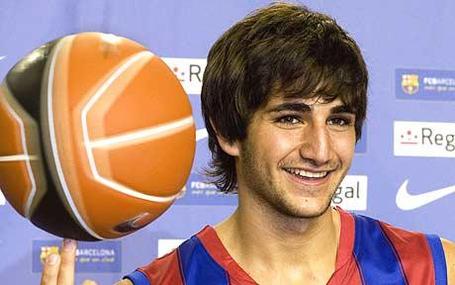 Rubio has had 4 turnovers in each of his last 4 games and has shot only 30% over that stretch. He could not pick a better time than tonight to have a standout performance, given the national spotlight that will be affixed to this game.

Carmelo Anthony - Out 1-2 weeks with a strained right groin

Baron Davis - Out indefinitely with a bad back

Amar'e Stoudemire - Out a week

Darko Milicic - We all know why, don't we? 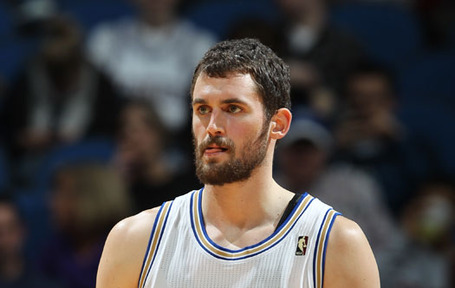 The NBA recently denied Kevin Love's request to keep an axe behind the Timberwolves' bench during games. As a result, he has threatened to stomp on one player's face per game until his axe request is granted. 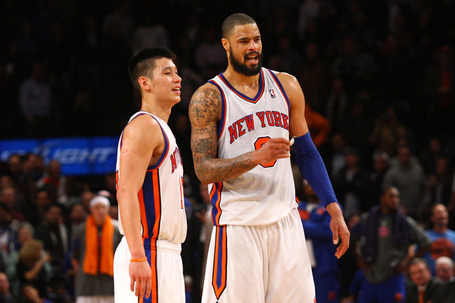 Enjoy the Linsanity while it lasts. You have until 7 PM CST tonight.