Share All sharing options for: More than just regular insanity

For those of you who don't know (which is basically everyone except S-n-P and Tim) I am South Korean. Born just outside of Seoul, adopted at 4 months old (I have gone back, mind you)

I wasn't originally planning on going to this game. But I was out with some friends last night and caught highlights of Jeremy Lin torching the Lakers, then woke up today and realized he was here. So I figured I might as well go and see if Linsanity was real.

Short answer: it is. But not in the way I was expecting.

The game itself was actually not that great. It was really sloppy, full of broken plays and silly fouls and all the things we've come to associate with Wolves' basketball. Turnovers. Bad wing play. A disasterous end to an attempt at a game-winning inbounds play. It was exciting in the sense it went down to the wire, but wasn't exactly the Suns versus the Warriors.

The copy will tell you Lin hit the game winning free throw #Linsanity. The truth is, the Wolves gave this one away. Lin just happened to be the guy at the line when they let go. The Wolves absolutely should have won this tilt. Even with the slew of turnovers (which is becoming a troubling habit of late) and barely anything to speak of from the wing positions. The team just was careless, and went cold at the worst possible time.

This team desperately needs a reliable, high end wing player (Nic Batum. Repeat it with me until it happens). It desperately needs a defensive presence in the middle. Pekovic is playing some damn good ball, but he hasn't changed my position that the team is best served with a low usage center who does his work on defense. Pek is the opposite...a high usage center who does his work on offense. With that high usage comes good and bad; the good is lots of points on not a lot of shots. The bad is a lot of turnovers (still hasn't figured out that three second rule....) and not much paint protection. If Amare Stoudamire had been healthy....well, let's just say I think the Knicks would have won convincingly, rather than by default.

It became obvious to me tonight why Lin works for the Knicks, and it also became obvious that D'Antoni's system is only part of it. Iman Shumpert, in fact, is living proof that it takes more than just a good system to play well. Shumpert is a terrible, terrible point guard (although he can apparently score in bunches when his coach stops caring about him not sticking to the playbook) He's Randy Foye's lack of anticipation combined with Jonny Flynn's attitude.

That said, the pick-and-roll certainly factors in. D'Antoni calls a lot of it. Shumpert can't run it to save his life. Same with Tony Douglass, and Mike Bibby has nothing left in his knees. Lin, on the other hand, can run the hell out of it. I'm not sure he even rolls out of bed without a pick from Tyson Chandler. And yes, as Steve Nash rightly points out, everyone runs some version of the pick-and-roll (unless your Phil Jackson or one of his wannabe proteges) but there it is.

Lin plays very smart. He skilled, crafty, and has a terrific change-of-speed ability. He shot terribly in the second half, but it wasn't due to taking bad shots. He got tired, and Rubio dialed in. It was pretty obvious that Rubio was aware of the hype and took it somewhat personally. His second half defense was outstanding.

But here's the thing; tonight I realized that Linsanity goes way beyond the court. It's not just Jeremy Lin the player. It's not just the cinderella story (where's the Pekovinsanity?). It's not just the adoring media and their endless Lin puns (Linsanity. Linsperation. Heat Lindex. All he does is Lin) Those just make me think of Senor Chang.

(FYI, Ken Jeong is actually Korean, not Chinese. But el Jeju just doesn't work quite as well as el Tigre)

First off all, there was just a lot of people. To the point there were standing room only tickets being sold. The announced attendance was over 20,000....the most since 2004. Not only that, but everyone was loud. The last game I went to (vs Cleveland) the only really loud people were the 5 rows of faux Spanish football fans. (which has now grown to be all of section 121. It's pretty funny...there was a row that clearly didn't know about it and were befuddled when they got conscripted into it) Tonight was enthusiastic in a way I haven't seen Wolves fans like in a long, long time. Game 7 of the 2004 semis, when KG, Spree and Sam beat the Kings to advance to the WCF is comparable. But for a real sure-fire analog, I'd have to go all the way back to the Marbury days, when he and Garnett led the Pups against Gary Payton's Sonics.

But here's the part that was really astonishing to me: there were a ton of Asians in the crowd. Very visible Asians, dressed J-and-K-Pop style and wildly screaming every time Lin did something cool.

Is the uproar about Lin's race justified? Debatable. But is it real? Absolutely yes. Don't let anyone tell you it's just a media gimmick, and the average person doesn't actually care. I was skeptical about it myself; that's why I went tonight. And I couldn't have imagined anything like this. 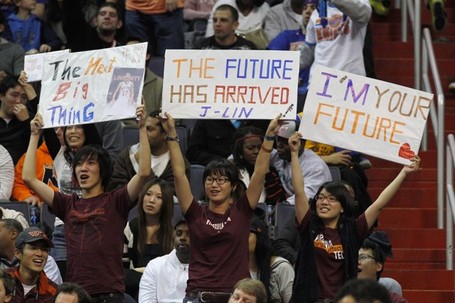 A group of 15 Asians followed me through the ticket gate (literally. I counted) Another 9 sat in the row behind me, and there were another 5 about halfway down to the court where I was sitting. When Lin was introduced, there was a giant roar from the crowd, and when he scored his first basket, groups of 5-6 Asians all over the arena jumped to their feet cheering. A group in the upper deck above me hung a giant Chinese flag from the railing. There was a row across from me waving Japanese flags. A group of Asian girls hung a "We Love You Lin" sign above the tunnel leading to the visiting locker room. I saw several Asian families in the hallway, wearing everything from homemade Lin jerseys to Minnesota Gopher sweatshirts. On the way out, I walked past a group of Vietnamese talking to a white couple about Lin. Another group ambushed me at the bottom of the stairs wondering if there had been a group of Koreans in the building (I don't know. If there was, I didn't see them). I didn't even know groups of Asians was going to be a thing at this game.

Like I said, I'm still trying to comprehend what it all really means. I was at Yao Ming's first game at the Target Center, and didn't see anything like this. Something about Lin speaks to the Asian population here. Credit the Wolves' marketing department. They did a fantastic job, as always. Lin has been on the scene for a week, and they managed to turn that into about 1,000 tickets they probably wouldn't have otherwise sold.

And equally astonishing, the rest of the crowd seemed to understand all this without being told. I never heard a question asked about the overwhelming Asian demographic at the game (and I really do mean overwhelming. I'm not usually one to intentionally look at these things, but there was just no way to not notice the difference tonight) None of the Asian groups got stared at, and the only "I'm cheering for the Knicks" screamers I saw get shushed was the group of kids in the suite to my right (which I admit, I was happy that happened. Seriously, if you had heard them, you would have thought the damn building was on fire...)

The reasons are debatable, but there's no getting around the reality that there haven't been many Asians involved in the NBA. Recent memory, only 4 players come to mind (Lin, Yao, Yi JianLian and Yuta Tabuse) and to my knowledge, the only Asian holding an executive position is Rich Cho in Charlotte. The same as how there are very few Asian movie stars in the West, few featured musicians, no comedy sitcoms of Asian families or chick flicks with Asians as the love interests. It's just reality. 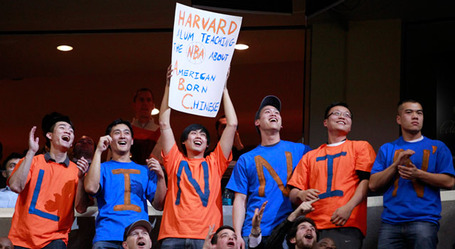 And from the 'outside', maybe this doesn't seem like a big deal. I don't know, I've only ever been on the inside. By no means am I condemning anyone, but I will honestly say the bias is real. I've run up against the stereotypes. I've heard the racist comments. When I apply for new jobs, people put me in the "ethnic" box. When I first meet people, I get a lot of comments about how I "look different". When I go out with non-Asian friends....particularly non-Asian women....I get stared at. It's not something I obsess over. It's not something I'm bitter about. But yes, it does happen. And tonight, I felt it. Which for me, is unusual all in itself.

Maybe it's because Lin is Asian-American, as opposed to an Asian immigrant or foreign visitor. Maybe we Asian-Americans see our own struggle in him...the struggle to reconcile the disconnect we feel between the Eastern heritage of our looks and the Western way we were raised (I know a lot of Korean adoptees. Every one I know has gone through this) When you're a citizen, you don't expect to be treated like a foreigner. My family didn't care. Why did anyone else? My cousins don't look at me and see an Asian person. They see their cousin, the same as they see their White cousins. I was raised just like them. The way I look doesn't change that.

Maybe we gravitate to Lin because he seems to have been accepted by Western society as a part of Western society. He plays basketball, and now people want to see him play basketball and be good at it, rather than thinking it's not something he should be doing. I don't mean to paint Lin as an Asian Jackie Robinson, (or brush off the breakthroughs of Yao or Tabuse or Wataru Misaka) but it did kind of feel like that tonight. Something about the crowd gave you the impression that everyone knew a threshold had been crossed.

Maybe that's what Linsanity really is. The bridge between what Asian-Americans get portrayed as, and what we really are. Maybe the appeal of Jeremy Lin is that he's found a way to show that to everyone.