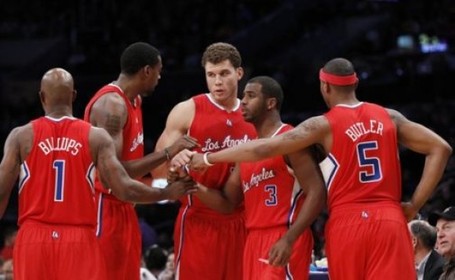 Steve Perrin of Clips Nation was kind enough to answer some questions regarding the Los Angeles Clippers as part of our Q&A prior to tonight's game. A big thanks to Steve for coordinating this back-and-forth effort. Check out his answers below the fold:

Vinny Del Negro has a reputation as a bad coach, but reputations aren’t always correct. How would you describe his performance?

Steve Perrin: Casual NBA observers don't always get what's going on. Even the pros don't seem to grok the nuances all the time, otherwise how to explain the fact that the coaches keep putting Kobe Bryant on the All Defense team? Good coaching is a little like pornography -- I can't define it, but I know it when I see it. Vinny Del Negro is not good at the X's and O's, at substitution patterns, at making in game adjustments, that sort of thing.

But having a point guard like Chris Paul can mitigate a lot of X/O shortcomings. The Clippers run one of the least imaginative offenses in the NBA, but they've got the fourth most efficient offense, because you can run constant pick and roll and still score plenty of points if you've got CP3 at the controls (not to mention Blake Griffin rolling). Ostensibly, the Clippers have other guys on the staff to focus on X's and O's (former Grizzlies head coach and Phoenix assistant Marc Iavaroni on offense, former Blazers assistant Dean Demopolous on defense) and Vinny can be the motivator, which he seems to do well.

Is the name "Lob City" as annoying to you as it supposedly is to Blake Griffin?

Perrin: I don't think it's really that annoying to Blake and the other Clippers, but I do think they are trying to play the part of the serious NBA contender this season. Last season they were on SportsCenter every night, playing in front of sell outs at home and on the road -- and they lost 50 games. Distancing themselves from the Lob City moniker is a way of trying to say highlights are not enough, we want wins.

The irony of the Lob City thing is that Baron Davis threw better lob passes than Chris Paul -- I might even say much better. Again, because the Clippers were out of the playoff race by mid December last year (think about that -- the season didn't even start until Christmas this year), the Clippers weren't afraid to try pretty much anything. But you don't go from 29th in the league in turnovers committed to 6th without dialing back the crazy stuff a bit. Chris Paul is much more about the bounce pass on the pick and roll than he is about the lob pass. They still get plenty of lobs, since Griffin and DeAndre Jordan can simply go higher than their opponents -- but look at highlights from last season and you'll notice that the passes were more spectacular. The team just didn't win as much.

I guess I never really answered your question. I like the Lob City nickname. I think it's fun.

Did the Clippers overpay DeAndre Jordan?

Perrin: Yes. And no. You pay for size in the NBA. Sometimes you pay ridiculous amounts compared to the production you get (see Milicic, Darko). DeAndre Jordan is long, he's athletic, he's active, and he's young. He made great strides last season, his third in the league, and still has lots of headroom. It was inevitable that someone was going to pay for that potential. Golden State got a little nutty in their search for a center in December, and signed DJ to a big offer sheet knowing full well that you have to overpay restricted free agents to chase their teams off, and hoping that Donald Sterling's reputation would trump his reality. They were wrong, and it cost the Clippers some money to keep DJ. But it's certainly easy to argue that a guy with a PER of 14.8 in 2010-2011 had no business getting 4 years/$43M.

Even so, there are lots of reasons that the Clippers had to match. As we mentioned, size is at a premium in the NBA. The Warriors had to turn around and pay Kwame Brown $7M and the Clippers still don't have another five on their roster. Jordan is also great pals with Griffin, and while it's not necessarily good business to be paying $43M for an entourage, there's also something to be said for keeping your stars happy. Speaking of which, there's also some indication that Chris Paul saw Jordan's re-signing as a factor in accepting a trade to the Clippers, as Jordan reminded him of his old buddy Tyson Chandler from their Hornets days. If overpaying Jordan a bit helps convince Griffin and Paul to stay in LA, then it was more than worth it, and you can bet those factors were part of the calculus.

Last thing - DeAndre Jordan is doing much to earn his payday this season. He's rebounding and blocking shots at career high rates (he's third in the league in blocks), his post defense is improved, and his ability to finish at the rim is invaluable with Paul on the floor. He is making 64% of his field goals, which is actually a bit below his career average. The similarities to Chandler are real, and Jordan has a chance to be an impact player on defense close to that level. If he continues to improve, he may end up being a bargain in the long run.

How much will the loss of Chauncey Billups hurt this team’s playoff chances?

Perrin: You'll get a different answer from me on this question than you'll get from some of my co-authors and community members. Let's start by saying that of the top six players in the Clippers' rotation at the time, it's my opinion that Billups was the easiest to replace. The Clippers began the season paper thin in the front court (a problem that has been ameliorated to some extent by the play of Reggie Evans and the signing of Kenyon Martin), but with a whole bunch of combo guards on the bench (Mo Williams, Randy Foye and Eric Bledsoe, who began the season recovering from knee surgery). Losing Paul or Griffin would obviously be devastating. Losing Caron Butler or Jordan would entail a massive drop off compared to their replacement in the lineup. With Billups, there's a downgrade at the starting two with Foye, but it's not as significant as one might think, and sixth man Williams was frequently closing games even when Chauncey was healthy.

On the court, Billups was shooting a career low 36% from the field. But he still provided several things that Foye can't. He was the Clippers best three point shooter, an invaluable asset with Paul drawing defenses and Griffin commanding double teams. He also has an uncanny ability to draw fouls and generate easy points from the line -- which comes in handy when the offense goes stagnate. Finally, on a roster of undersized guards, Chauncey was at least big enough to hold his own against a Kobe Bryant -- it's not always an option to play Paul and Williams together. So Billups will be missed for sure.

It's impossible to gauge the importance of Billups experience and leadership when the playoffs roll around. But it's not like Chris Paul is a poor floor general -- when you've already got one of the best leaders in the game, it softens the blow of losing a guy like Billups. Chauncey is recovering from his surgery in Denver at present, but he'll soon be back with the team and will be a presence in the locker room for the stretch run and in the playoffs. Chauncey Billups has plenty to contribute to this team even while wearing a suit.

Are the Clippers the best team in L.A.?

Perrin: So you just come out and ask it, eh? No beating around the bush, no wiggle room for me, just boom. Yes, the Clippers are the best team in LA right now. They had a better record than the Lakers at the All Star break, and that's not a fluke. UCLA is way down. Long Beach State is pretty good, but the Clippers are better than the 49ers too.

The Lakers remain dangerous, but they are who they are, and I don't think you can make a very convincing argument that they've underachieved so far. Maybe they're having some trouble adjusting to life under Mike Brown, but their problems seem pretty obvious really. Let's face it -- Kobe Bryant is playing better than a 33 year old has any right to, and Andrew Bynum is healthy and in the middle of a career year. Pau Gasol has been fine, even if he's losing some touches to Bynum. The Lakers just don't have anything -- ANYTHING -- beyond those three guys. When Steve Blake is considered a significant loss, you know you've got depth problems. You don't have to look any further than the Lakers' 6-12 road record to know that they have issues. The Lakers would have to finish 11-4 in their remaining road games to finish the season with a winning road record, and that's not going to happen.

Meanwhile, the Clippers are younger and have much more headroom. They had to integrate three new starters into their lineup, suffered a major injury, and even played without Paul for a sixth of their games, and yet they still led the Division throughout the first half of the season. Anyone who says the Lakers are better isn't paying attention.