For those of you who have stuck around this here blog for the last few years.....well first, you're either incredibly tough of incredibly stupid, because Puppy basketball circa 2009 nearly cracked even S-n-P's sanity.

But more to the point, you're also no stranger to the concept of the "outlier performance". You know, those random times when random players perform 1000% above their norm, and/or the team collective accomplishes something so stupendously horrible/amazing it defies the time/space continuum of the basketball universe. Things like sub 40% eFG, point guards having arguably the worst season of any professional basketball player in history (that's not just Flynn either, BTW) or the number of times I used '/' in the last sentence.

Well folks, tonight would have to be qualified as an outlier for the following reason: 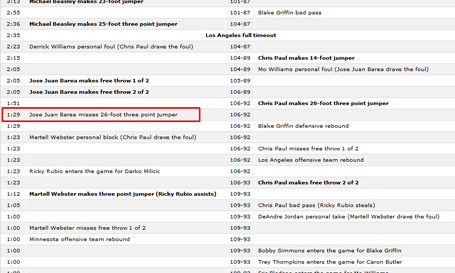 Boxed in red is effectively the only shot the Timberwolves missed the entire fourth quarter of this game. Ok, they missed a couple threes in the last 0:30 when things got pathetic and the team started goofing around. But ya....think about that play-by-play. Your Wolves did not miss a shot for ten and a half straight minutes of basketball.

Michael Beasley and Derrick Williams shot a combined 20-25 (including a perfect 7-7 on threes), scoring 27 points apiece. Love exited early with a rib injury. Adelman benched Rubio and Pek. The Timberwolves won this game riding a lineup of Darko/Williams/Beasley/Webster/Barea, who scored a combined 72 points. That's a season high for a bench unit, and (if I'm not mistaken) just one point shy of tying the all time high (73 points by the Mavericks in 2002 against....us! The irony. It burns)

Oh, and the Wolves did it all wearing those Muskie jerseys too.

The last couple of weeks have just been non-stop can't compute performances.