Part 2 of Ricky and Pek

Share All sharing options for: Part 2 of Ricky and Pek 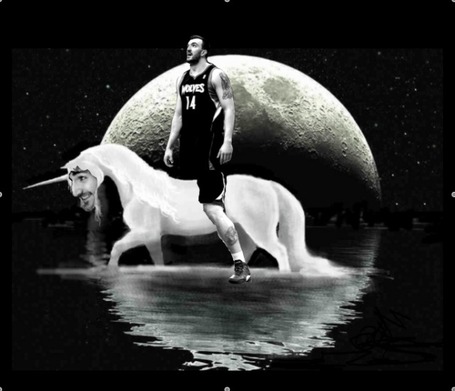 This is getting good.

Before I go on, does anyone know of any more talented potential folk heroes in the professional basketball world right now? The Wolves want to corner the market and you should send your player to 600 First Avenue, Minneapolis, Minnesota. ATTN: Crunch.

Our Beloved Puppies entered the game against the Nets with 2 players performing in the star-to-superstar range and one player making a rapid climb from tankish goofball oddity to an above average performer. The Wolves left the Meadowlands with these three laying waste to a plucky Nets team who were unable to ride an amazing shooting night from a player that would look prettttttty good in Minny blue (at least compared to what currently is trotted out at the 2-spot) to victory.

Let's get right down to it with Pek: How cosmically funny is it that another McHale draft pick is blossoming into a starting player under David Kahn? How much funnier is it that he essentially plays the role of Al Jefferson, or of a much bigger Craig Smith? How perfect is it that he is decidedly not long and not athletic? He's the anti Ryan Hollins. He's a Mac guy through and through. He's much more Celtic than Showtime. Ohhhhhh....this franchise is still the gift that keeps on giving.

Anywho, the Peksecutioner was in full effect last night in Jersey and he put up the following stat line in 34 minutes of action: 27 points on 11-14 shooting, 5-6 at the line, 11 rebounds (4 offensive), 3 turnovers, and....wait for it...ONLY FOUR FOULS!!! Forget the big scoring output. Playing nearly 35 minutes without fouling out is a big accomplishment for Pek and it should not go unnoticed.

My favorite thing about Pek is his currently unparalleled ability to get the ball within shoulder's length of the rim. Can you imagine if someone like Dwight Howard could figure this sort of thing out? I guess that's the kicker: you can't figure this sort of thing out because you're either born with the strength of an ox (and no amount of protein shakes or sculpted biceps will change that) or you're not. Pek has small area quickness. He rebounds like a madman. He sets all sorts of barely-legal picks. He runs straight up and down and it is beyond funny to watch him huff and puff his way up and down the court. He has the crazy tattoo, the accent, and the Bond villain looks. Now throw in the fact that he's becoming very good at professional basketball in the NBA and you have the perfect addition to this squad.

(BTW: Is ox strength athleticism? I know we get all geeked up about Blake dunks and whatnot, but how does silly ox strength enter the athleticism picture?)

As good as Pek was, this game was yet another example of why Ricky Rubio is horrifyingly good at basketball. Deron Williams had his lunch handed to him by the rookie and it wasn't really even close. Ricky was everywhere last night. Getting hands in passing lanes, racking up 6 steals, 10 assists, making a shifty right handed layup from the left side of the court against Kris Kardashian, you name it, he did it.

One of the things that has impressed me most about Rubio is his awareness on the defensive end of the court. As much as we talk about his amazing passing, he seems to have the same vision on the defensive end. At least 2-3 times a game I see the opposing team execute some weak side action where a big will back pick a Wolves wing player and then rotate towards the hoop. In past seasons, this guy would have gone unguarded and we would have all been witness to a bunch of thunderous dunks. This year, Ricky sees the play unfolding on the weak side, and casually drops down to cut off the passing lane to the big. It takes all of a half of a second and it's really something of a sleight move, but it ends up saving 4-6 points a game. It never fails. Watch him on defense next game. There will be at least 2-3 times where he flashes at a cutting big on the weak side to prevent the entry pass. It's a thing of beauty.

OK, I've gone on long enough and I need to get some sleep. We are on night #1 of Kid 3 (Baby Toddler Phalen) being de-binkified and she has been quiet for 30 minutes now. Must sleep. No time for proof-reading. Random thoughts:

Well folks, that's about it. Sorry for the rush job. It's de-binkification night #1 and I gots to run.