When you can, while you can

Share All sharing options for: When you can, while you can

It is as though the space between us were time: an irrevocable quality. It is as though time, no longer running straight before us in a diminishing line, now runs parallel between us like a looping string, the distance being the doubling accretion of the thread an not the interval between.

- William Faulkner, As I Lay Dying

This team could make the playoffs with a solid wing player. They could do it this year. With each passing game, that "win now" window shrinks off into next season. Yes, I'm happy that they're finally good again. I'm also a bit chapped that they aren't taking a swifter approach to address the 1 glaring flaw on the roster: the wing. You never know what will happen in the future. Love could break a leg, Ricky could start eating Vaseline, and Pek could go on a multi-state murder rampage. Win when you can while you can.

The river is neither cruel or controllable. It simply is. The boat captains can only really guess about the two fathoms needed to mark twain. Sometimes, you just scrape the bottom.

There is nothing good about what happened during the night the Wolves were whited out. It isn't "better" because Ricky somehow doesn't rely on his athleticism as much as other players. There isn't a silver lining that will allow him to rest his body and return fresher and more hungry than ever. There is nothing Kevin Love or Nikola Pekovic will learn about playing next to someone like Malcolm Lee other than the simple fact that Malcolm Lee is not Ricky Rubio.

As of last Thursday, things seemed to be going according to plan:

David Kahn will be back next season to continue rebuilding the Timberwolves.

Kahn, 50, is in the third year of a three-year contract as president of basketball operations. But the deal includes two more years at the team's option, and owner Glen Taylor said Wednesday night he wants Kahn back.

"I like David; I'm happy with him," Taylor said.

Taylor said he and Kahn will firm up the option at season's end. The Wolves (21-19), who play host to the Los Angeles Lakers tonight, are tied with Kevin McHale's Houston Rockets for the eighth playoff spot in the Western Conference.

The Wolves are 3-1 against Houston this season, so they have the tiebreaker advantage. The teams won't play each other again during the regular schedule.

By the way, the Wolves currently have a 60.8 percent probability of making the playoffs, according to ESPN.

Who could have seen this coming? Why does the river bend? 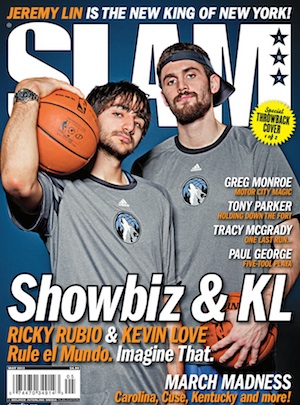 So close, so far.

Ricky Rubio is, was, and always will be David Kahn's meal ticket at 600 First Avenue. He was his only saving grace as a draft pick. He was one of the two main reasons why Rick Adelman walked through the front doors. He was also probably the biggest carrot Minny had to offer potential free agents during the off-season.

Is all of that gone? Of course not. Am I somehow saying this is Kahn's fault? You are an idiot.

What I am saying here is something of a seize-the-day/you-aint-promised-s**t platitude. The Wolves still have a superstar performer. They have a rough-and-tumble banger of a center whom the river has unexpectedly granted us with fantastic production. It giveth and it taketh away.

When you can, while you can.

Thankfully, Team Adelman seems to know how to keep their wits as time moves them down the line. They will captain the boat on as straight of a course as possible. The boat, however, remains what it was before the river tore open its bottom. The man charged with its repair is the same gentleman who put the vessel together. Is he up to the task at hand or will we get yet another round of kick the can?