Q&A With Ben Swanson of Rufus on Fire

Share All sharing options for: Q&A With Ben Swanson of Rufus on Fire 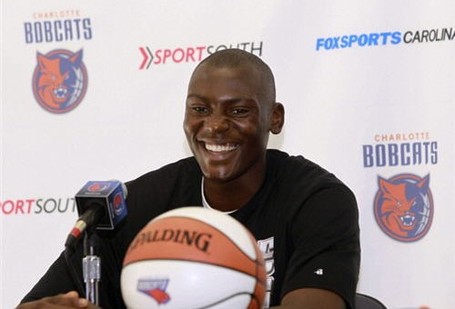 As pretty much every one of us knows, it is not easy to follow and write about a struggling team, like the Charlotte Bobcats are this season. That makes what Ben Swanson and the folks at Rufus on Fire have done this season even more impressive. If you haven't read any of Ben's stuff (@CardboardGerald on Twitter), I would definitely recommend going over to Rufus on Fire and checking it out.

Ben was also nice enough to answer a few questions about the Manther, the future of Bobcats' basketball and Kemba Walker's potential.

1. Over at Canis Hoopus, we have a lot of fans of Bismack Biyombo, who we’ve nicknamed the Manther (that’s half-man, half-panther). What are your thoughts about him and would you agree to a Derrick Williams-for-Biyombo straight up trade?

I'm not sure about that trade simply because I haven't seen Derrick Williams play much. That said, I do have my concerns about Biyombo.

Now, I know he's simply an extremely limited offensive player, but his hands must get better. Not just talking about his touch on shots in the post, but getting control on the entry pass. But yes, he is better offensively than I expected. I mean did anyone think Biyombo would be shooting over 45 percent this year? Watch out for him on the left block putting up hook shots. The hook is his favored shot by far. Everything else offensively is a mixed bag. A mixed bag with lots of holes in it.

Defensively, I have many fewer issues. Fans often overvalue help defense when deeming someone a a good defender, but one cannot overvalue Biyombo's help defense. He's improved in pick and roll situations and defends the rim very well. Unfortunately, you'll see him get scored on often. He's just overwhelmed with no other solid defender at the PF or C, depending on which position he plays. He's left on an island, more or less, trying to box out multiple men on defense, which ends in giving up offensive rebounds and second-chance points, which you could see in the Celtics game. His post defense has some room for improvement too. He gets beat on head and pump fakes, but he is strong enough to fight well for positioning and trying to deny entry passes. He also doesn't foul a whole lot, which is nice.

Most encouraging is his seemingly unquenchable thirst for knowledge, in basketball and shoot, just anything he's interested in. Tireless work ethic and a great teammate personality helps too.

2. Having watched the Wolves get to 15 and 17 wins over the last two seasons, respectively, we definitely understand what it’s like to be where the Bobcats are right now. Kevin Love, Ricky Rubio and Rick Adelman (and to a certain extent, Nikola Pekovic) have helped turn us around. What are some reasons for optimism in Charlotte?

Hmmmm optimism....optimism. Well, Diaw is gone. That's nice. Also, we see the young players showing flashes of great play, hopefully hints of what they can develop into if they keep working on solidifying their game and consistency.

Also Bobcats fans have to be optimistic about the draft. Even if Charlotte misses out on the top pick (they probably will, it's the universe's natural order), there's still great talent in the top four picks, especially in this draft. Who knows. I'm hardly the most optimistic person, but I try to at least be neutral in my outlook of them, just using humorous pessimism. Still, if you're wholly pessimistic and follow the Bobcats, my God, I'm dialing the suicide hotline now.

3. Were you surprised D.J. Augustin was not moved at the trade deadline?

I wasn't very surprised, honestly. Call it a hunch or a feeling, but it seemed like he wasn't getting traded. Plus then it came out that Augustin had turned down the Bobcats extension offer, not the Bobcats declining to offer him one, as first reported. So Charlotte definitely still had interest in holding on to him. It didn't look like there was a whole lot of interest from teams in him that could give the Bobcats something they'd want in return, like a pick or another young guy.

4. What are your thoughts on Kemba Walker’s upside?

Kemba's development has been as intriguing to me as Biyombo's. You hear everyone say "Oh, he just can't play the point" or "He's not a natural point guard" but he's quietly often running the Bobcats offense better than Augustin. From the beginning of the season until now, I've seen his playmaking as a distributor on the pick and roll improve a bunch, which I feel is a very important factor in point guard success. His shooting is a sticking point, because that's easily been subpar for a guy that needs to be able to score.

But if you watch him play, you see the rudimentary tools are there and are very good. He creates space in the midrange like few point guards can and can take opponents off the dribble. His jumpshot is the issue, though. His form is good, the shots just don't fall. If he just tightens up his shot, he could be quite good. But as you can tell, the problem with this talk is that it's speculation.

5. Would you rather have Darko Milicic or DeSagana Diop?

Darko, easy. He's more talented on both ends of the court and his contract is cheaper. Gana Diop has a player option next season, so he'll definitely be back for '12-'13. But Darko's '13-'14 year is a team option, so they could be off our respective teams in the same offseason. DARKO 4 EVAAAAA