The Magic Word is Playoffs

Share All sharing options for: The Magic Word is Playoffs 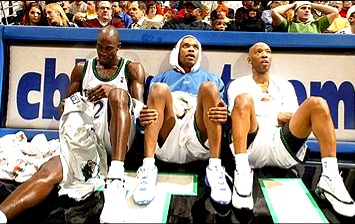 Minnesota's season ends after 100 games and 68 victories. The Wolves posted the best regular-season in franchise history at 58-24 (earning the Western Conference's top playoff seed) and finished 10-8 in the postseason. They eliminated Denver 4-1 in the first round and edged Sacramento in seven games of their Western Conference Semifinal series. Entering the 2004 Playoffs, Minnesota had suffered an NBA-record seven consecutive first-round ousters; the Wolves were a combined 7-22 in those series.

That was the copy 8 years ago...the last playoff game the Timberwolves have played...when the Los Angeles Lakers beat them 96-90 to take the Western Conference crown and advance to the Finals (where they would proceed to get embarrassed by the Detroit Pistons). In that game, the Lakers were carried by Kareem Rush, who came out of nowhere to hit 6 of his 7 threes. The Wolves also struggled to adapt to the loss of Sam Cassell, who was injured and not playing. Without the floor general's firepower, the Pups just couldn't quite find enough scoring punch to top Shaq and Kobe.

Why do we bring this up now? Well, because after tonight's victory (and Houston's loss...to the Raptors of all teams no less....) the Wolves have officially moved into the 8th seed on the Western Conference.

Yes, you read that correctly. The Wolves are currently in the playoffs.

Tonight was actually a bit of sad irony. The Timberwolves did this all by beating a heated rival in back-to-back sets. A Trailblazer team that has dominated us for 4 years running before getting hit with some of the worst luck imaginable. Brandon Roy has nothing left in his knees and was forced into retirement. Greg Oden just underwent yet another microfracture procedure (his third, if I've counted right) and may not be far behind. They were destined for greatness. They could have been champions by now.

But fate is a cruel mistress, and so here we are. Tonight the Wolves caught a glimpse of their possible future. Tonight the point guards were real point guards. Tonight, Wes Johnson played like he should be playing every night (he's capable of it. The talent is there) Tonight Kevin Love came through with another ridiculously good performance.

What's frustrating....in more than one way....is that we (meaning both the team and us as fans) actually have a tangible grasp on something significant now. The 8th seed isn't just a future hypothetical. It's real. We have it. And we did it with an absolutely awful wing rotation and next to no defense in the post. If we can get here with Love, Rubio, and scrappiness, where can we get with Love, Rubio, and a real supporting cast? Tonight we got a taste of what that's like. Tonight the wings came through. Tonight the team played defense (in the second half at at least...) Think if we got that every night. Think if we had Bismack Biyombo and Nic Batum on this roster (sorry Portland fans. We here at Canis Hoopus are 100% behind any and all efforts to sign him away from you) That kind of roster makes the 8th seed the floor, not the ceiling.

Yet on the other hand, there's good logic in not rushing for a bandaid fix. We saw one tonight in Jamal Crawford. I trust he has played himself off everyone's wish list...? Your team is possibly still pursuing him, and possibly landing him could possibly cost us the chance at a Nic Batum. Is making the playoffs this year worth not having a Nic Batum for the next 5? That's a hard question to answer.

In the meantime though, let's celebrate. The Wolves have officially made it out of the land of the dead, and did it in style. For once, 'onwards and upwards' can non-sarcastically mean just that.

To and Blazer fans reading this: I really am sorry. You guys had a dynasty brewing, and it fell apart for no other reason than sometimes the cosmos hate us. I'm not too proud to admit that this fanbase has spent a lot of the last 5 years in jealousy of both your team and the guys who put it together. I think LaMarcus Aldridge is a legit player. I think Greg Oden is sadly never going to step on an NBA court again. I think you made a mistake firing Rich Cho. You guys will make it back someday.

As for the rest of you Canister Hoopusters, here's your debate question for the night: you just saw Jamal Crawford live and in color....still worth it?