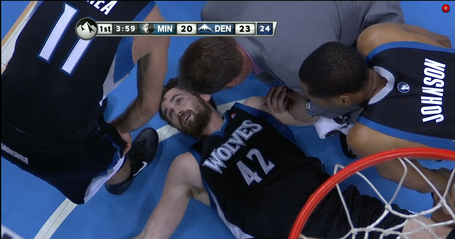 This is getting out of hand in a hurry.

While the Wolves probably won't reach the talent depths of the Foye/Shaddy, Chris Richard, Rhino, Kirk Snyder mess that saw the court in April of 2008, a Loveless Wolves squad with a wounded unicorn is certainly in the 09/10 Jonny Flynn, Corey Brewer, Ryan Gomes, Ryan Hollins, Darko Milicic neighborhood.

Can they just forfeit the remaining games? They're running out of silver-lining possibilities. Get it over as soon and as painlessly as possible and get on with the offseason.

Mix ingredients and rub over the chicken as evenly as possible. Cover and let sit in fridge for a few hours.
Preheat the oven to 400 degrees and line a pan with foil. Place marinated chicken on the pan and roast for 45 minutes to an hour, turning once.
Remove from oven and serve immediately with sticky rice and some veggies. (Pickled veggies are especially delicious with this recipe.)
If you're not in the mood for making Ga Ro-Ti (Vietnamese roasted chicken), head on over to my favortite Vietnamese restaurant (owned by a Wolves fan, no less) Trieu Chau: 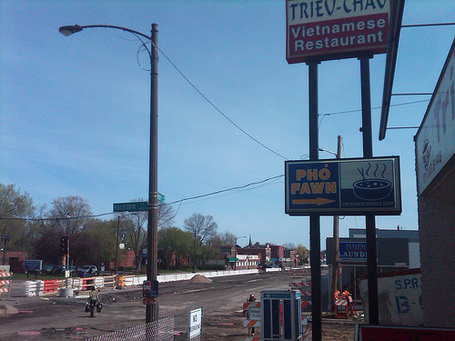 Trieu Chau serves up an awesome bowl of pho as well as one of the best Banh Mi sandwiches in the Twin Cities. As you can see they are located right on University Avenue and they will need all the business they can muster up during construction. Here's a link to directions to the shop.

If Vietnamese cuisine isn't your thang, check out Homi, a few blocks to the north at the corner of University and Victoria. They have the best mole in town. They also need your construction business.

UPDATE (6AM): It looks like I shouldn't have turned the game off after Love's concussion and the team going down by 20. Sounds like Caged Lion and Randolph both had career nights to make it a game. That must have been fun. It was a nice early bed time, however. Ben Polk has a nice game review up over at A Wolf Among Wolves for those of you who want a recap.