Share All sharing options for: Q&A With Steve Perrin of Clips Nation 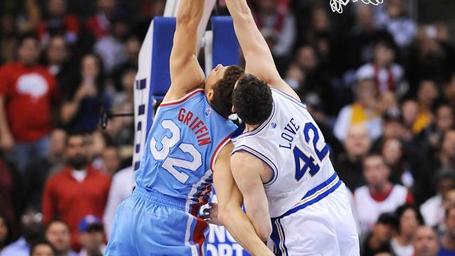 The Los Angeles Clippers and Minnesota Timberwolves will play their final game of the season tonight, and as he has done previously this season, Steve Perrin of Clips Nation was kind enough to participate in a fun Q&A.

This time I asked him about the Clippers in the playoffs, which Blake Griffin poster is his favorite, and if he could swap Chris Paul for any other point guard in the league, which one would he choose (if any)?

I also answered some questions over at Clips Nation and you can check those out here. 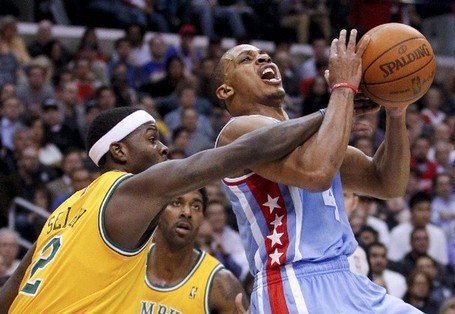 As of right now, and clearly things could shift between now and the end of the season, the Clippers would be facing the Memphis Grizzlies in the playoffs. How do the Clippers match up with Memphis and, if you could hand pick your first round opponent, who would it be?

The Clippers have beaten the Grizzlies two out of three games this season. The one loss was earlier this week on the road in the middle of Memphis' current roll, and even that one the Clippers came back from a 17 point deficit to get within three in the final minute. So regardless of matchup logic, the Clippers on court results against Memphis have been pretty good.

Tony Allen is a defensive game changer -- but is more suited to defending twos and threes. He hasn't had much success defending Chris Paul in the two games he played against the LAC this season (both Clipper wins) and he's too small to defend Blake Griffin. He's an impact defender, without a player to impact in this case.

Memphis thrives on turnovers, and the Clippers take good care of the ball (third lowest turnover percentage in the league). If you can keep the Grizzlies from getting those easy buckets off miscues and force them to play half court basketball, they have a lot more trouble scoring.

The wild card there is Zach Randolph. He played in two of the three LAC-MEM games this season, but he clearly hasn't been the same player he was last year, particularly in the playoffs. Last year he was the one guy the Grizzlies can give the ball to and say "Go get a bucket" and he hasn't been that guy this year. Memphis is clearly a scary first round opponent, but depending on which Randolph shows up, I like the Clippers chances against them.

If I could pick any first round opponent for the Clippers, I'd choose Charlotte. I like LA's chances in a seven game series with the Bobcats. But given the rules of the NBA playoffs (not to mention mathematics), that's not really an option. The Lakers would be a nightmare opponent -- the Clippers have no one to defend Kobe Bryant, and Andrew Bynum is always motivated against the Clippers (and you don't want to play against a motivated Andrew Bynum). I don't see Memphis slipping to sixth, so it would take the Clippers moving up to third to avoid the Lakers or the Grizzlies -- and in that case, I'd be thrilled for them to face either the Mavs or the Nuggets or the Rockets. Of those choices, the Rockets, whom the Clippers swept this year, would probably be the most favorable matchup. 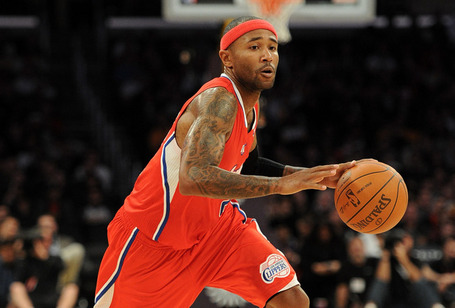 The Clippers could have an interesting offseason. Will Mo Williams accept his player option? Will the Clippers try to resign Nick Young and/or Chauncey Billups? What piece is missing to the Clippers’ championship puzzle and who would like to see them pursue in the offseason?

These are all great questions. Strangely, for one of the only times in my Clipper fandom, it's April and yet I'm paying more attention to the current season than the next season. It's hard to know what Mo is going to do. In his mind (and his agent's), has he done enough this season to make it financially viable to opt out? He won't make $8.5M in the first year of a new deal, but he can probably secure more guaranteed money now at the age of 29 than he can get at 30. The Clippers have Chris Paul and Eric Bledsoe among the five rotation players who will definitely be back next season -- the roster is just too unbalanced with three six footers who need minutes. Mo and his agent surely understand that -- I think he'll decline the option.

If Williams does opt out, it will present GM Neil Olshey will an interesting dilemma. Does he amnesty Ryan Gomes and try to maximize cap space (by my math they could get about $10M or $11M under)? Or does he retain the Bird rights of his myriad free agents like Billups and Kenyon Martin and Randy Foye and Reggie Evans? (Nick Young lost his Bird rights when he was traded.)

Olshey has stated point blank that Billups will be back (yet another reason that Williams should probably be looking for a different opportunity; Chauncey will have some say in that as well of course, but he has seemed pretty happy here and is very close to Chris Paul. Martin and Evans are redundant, so you don't need both of them -- Martin is no doubt the first choice there. Foye has played well for the Clippers (really well at times) but once again he's just a little too small on a team that has plenty of small guards, especially with Billups back.

Young fits a need for size in the backcourt, but has not played particularly well as a Clipper. He's a decent fallback if they can't upgrade at that spot, and assuming he can be had a decent price. He's an LA kid who is thrilled to be back home, so it's entirely possible that the Clippers could get a home town discount.

Olshey doesn't have a lot to work with this summer, and he's got some pretty big holes to fill, so the "final pieces to the championship puzzle" may not be realistic, barring some great acquisitions on the cheap, like veterans chasing rings. The biggest need is for a starting two guard -- I don't think Billups is that guy, at age 36 and returning from an Achilles injury. Unfortunately, I'm not sure I know who that guy is. There will be some interest in Ray Allen as a floor spreader, but if Billups age is an issue, then Allen doesn't make a lot of sense either.

The other need will be for front court depth. The backup small forward has been a problem for the Clippers all year, and a big off the bench with SOME semblance of an offensive game would be nice. I look at guys like J.J. Hickson and Brandan Wright and Anthony Randolph -- long, athletic former lottery picks that have shown flashes but never really panned out -- as the kinds of guys the Clippers should be pursuing. 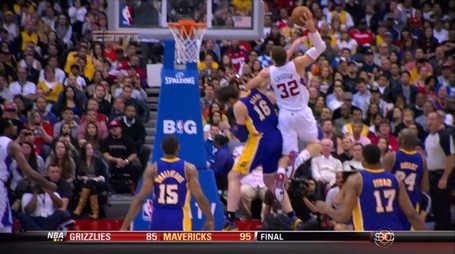 Pau Gasol. Kendrick Perkins. Timofey Mozgov. Which one has been your favorite, and, which player in the NBA would you most like to see Griffin posterize?

You never forget your first love, so it's not really a fair fight -- the Mozgov is the sentimental favorite because it came first. Who knew that this style of dunk, which we'd never really seen before, would become a trend for Griffin? Each of the dunks has its merits. The Mozgov came first, the Perkins was against one of the meanest, toughest dudes in the league, and the Gasol came in the middle of a contentious game against a bitter rival, not to mention that it was the second poster of the same guy in that game. Oh, and the forearm to the face, with Gasol winding up on his wallet was nice too. Maybe I'm convincing myself that the Gasol was my favorite.

Who do I want to see on his next poster? Kevin Garnett would be cool, just because he deserves it. Tim Duncan would be kind of a cool baton pass from the old school to the new. But if we're thinking big, how about Dwight Howard? 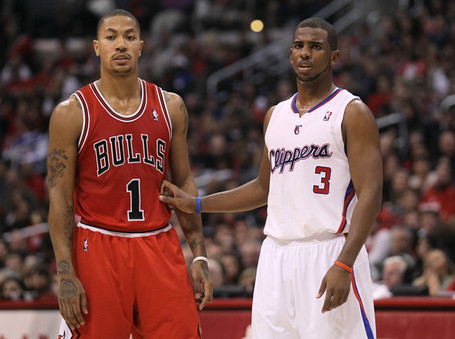 Imagine a world where every player had the exact same salary and the trade deadline was pushed to tonight at 9 PM PST. Every team in the NBA comes to the Clippers and offers their starting point guard in exchange for Chris Paul. Should they accept any one of those offers?

The only one -- I mean the only one -- I would consider would be Derrick Rose. And frankly, I'd be torn. Ignoring the games missed this season, which seem like bad luck and not any sort of long term injury concern, I've always preferred pass first point guards. Rose is younger and is clearly a monster, but he's really a scorer who happens to handle the ball a lot. I'm also a fan of efficiency, which Rose is not.

So I guess the answer is no, I wouldn't. Definitely not for Russell Westbrook, not for John Wall, not for Deron Williams, not for Rose. I might take Steve Nash and a time machine, but short of that, I'll stick with Chris Paul, thank you. 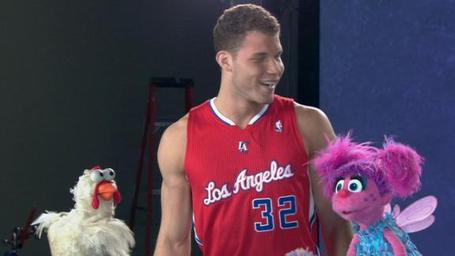 Do you feel like the Clippers get the respect that they deserve in the Western Conference?

In the media everything is magnified. When the Chris Paul trade happened, and while the Clippers were playing well in January, there was clearly too much hype surrounding the team. Then when they slumped in March, everyone in the media said "Well, there was too much hype around this team" -- completely ignoring the irony of the fact that they were the ones hyping the team to begin with.

There are still elements out there that view the team with the "It's the Clippers" filter. Years of ineptitude, and dirtbag for an owner -- some people just assume the worst and expect that the Clippers will fail, that they'll do something to screw things up. Honestly, it would be nice if a few more people would just look at the team, and honestly assess the things that are right and wrong with the team, but it may take another season or two to get to that point.

The other 29 teams in the NBA have plenty of respect for the Clippers.